Tyrone, with two defeats, look in danger of being drawn into a relegation struggle 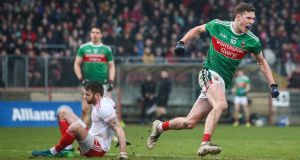 Mayo brought energy and power to Healy Park and left with two league points and a hatful of exciting possibilities for returning manager James Horan to ponder.

With old hands such as Keith Higgins and Andy Moran still performing with hunger and zest, and newcomers Michael Plunkett, Fionn McDonagh and Ciaran Treacy adding to the talent pool, the westerners appear ready to renew their relentless pursuit of the game’s greatest prize.

Horan clearly feels a strong league campaign is essential to the big summer push, and he has his troops in fine fettle at this early stage of the season, their strongest NFL start for some years.

With two wins from two outings, they are perfectly placed to challenge for a league final appearance, while Tyrone, with two defeats, look in danger of being drawn into a relegation struggle.

It was Higgins who hammered in the first nail with a smashing 32nd minute goal, before the talented McDonagh displayed calm and precision as he drove home a second 13 minutes from the end.

In the end, Mayo were well worth their nine points winning margin, and wouldn’t have been flattered had it been more. They were simply at least one level above their opponents on this occasion.

“Delighted with the performance and the way we played, thought our focus and attention was very good today,” said a satisfied Horan afterwards.

“Our tackling was strong, discipline in the tackle. We probably have some extra work done over Tyrone. I thought our legs were very strong, with our second runners, they got away a few times and that gave us huge impetus. Delighted with how we played, no question.”

It’s Mayo’s strongest start to the league in some years, and Horan put it down to solid pre-season work and the freshness introduced by new recruits.

“We have some good work done and we had Fionn McDonagh and Ciaran Treacy, two wing-forwards, and Michael Plunkett at centre-half-back, they did extremely well.

“They are very good players, very mobile, very athletic and full of enthusiasm. We are delighted with how they have done, they have added to the team and added to competition. Fionn and Ciaran had 1-5 between them, we have to be delighted with that.”

And the contributions of some seasoned campaigners were immensely important, chiefly those of Moran and Higgins.

“Well, Keith is just a special type of guy, everyone knows that at this stage. He got up there and got a goal, gave us momentum just when Tyrone were at us a little bit. And Andy was just relentless in his movement, he kept two Tyrone guys busy in there, mightn’t have got much ball but the work he did in there was phenomenal.”

Apart from early scores from Darren McCurry and Lee Brennan, Tyrone scored just once more in the opening half.

They were pummelled throughout the second quarter by a focused side that forced a series of turnovers and drove hard from deep, with Treacy and McDonagh showing a knack for picking off tidy scores.

Moran’s elusive runs had Ronan McNamee in untold difficulties, and two points from the veteran had his side into a lead they never looked like losing.

It was Moran who provided the assist for a terrific Higgins goal late in the half, a score that sent them in at the break with a healthy 1-7 to 0-3 advantage.

Paddy Durcan’s strong running kept Mayo on the front foot as they stretched the advantage, with Jason Doherty chipping in with a couple of scores.

A raft of changes, including the arrival of Padraig Hampsey and Conor Meyler, failed to improve Tyrone’s fortunes, and scores from McCurry, Brennan, Peter Harte and Conan Grugan did little to threaten a comeback of substance.

Mayo were clearly enjoying their football on an icy Omagh afternoon, and they added a cherry on top with McDonagh’s clinical finish to the net on 58 minutes.

Goalkeeper Niall Morgan did create something of a stir with a point from play, but the home side played out the final 10 minutes with 14 men as Michael McKernan departed for the sin-bin.

1 Owen Doyle: Creeping professionalism of schools rugby a threat to the game
2 Rugby under threat; Niall Quinn steps into FAI breach
3 Caroline Wozniacki’s career ends with defeat to Ons Jabeur
4 Niall Quinn happy to step into the breach at FAI
5 GAA officials and referees brace themselves as new rules kick in, and this time it's for real
Real news has value SUBSCRIBE