The Backdoor: Brian Cody’s lack of Plan B sees Kilkenny caught out 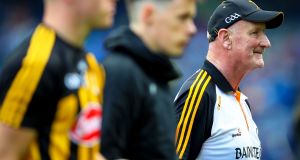 No back up plan from Cody

You could argue Marty Morrissey was playing the role of Captain Obvious a little too, well, obvious; but he was nonetheless bang on the money.

Only a few long balls had gone into the Kilkenny full-forward line when the RTÉ commentator gave his analysis of the second half predicament facing Brian Cody.

“The reality is Kilkenny are going to have to run ball at Tipperary’s defence because long balls are not going to work,” he said. He was right. Cathal Barrett, acting as the spare man in defence for the Premier men, had more than enough experience in the bag to sweep on to any loose ball, and yet Kilkenny persisted with their route one approach.

The approach became predictable – desperate even – and if Cody was a rookie manager he would have been rightly scapegoated as being too green on the big day.

The 11-time All-Ireland-winning manager, it seemed, had failed to countenance the possibility of losing an experienced player to a red card and, when it happened, he was unable to formulate a plan outside hitting the sliotar long to Colin Fennelly, and then TJ Reid.

It was, perhaps, the manager’s poorest All-Ireland final manning the side-line, while the ever-animated Liam Sheedy played his cards with all the shrewdness of a poker shark.

Richie Hogan’s dismissal itself was unfortunate, but it was also fair. Given we know so much about the consequences of even minor hits to the head players need to convey a duty of care, regardless of the level of malice involved. So Hogan left his experience and guile in tow, and Cody had no remedy.

Conversely, there was probably an element of a tactical intuition on Sheedy’s behalf that ensured Tipperary, unlike Wexford in the semi-final, made the extra man count.

But it’s still going to hurt on Noreside.

5-83: After scoring 11 points on Sunday, Kilkenny captain TJ Reid finished as the championship’s top-scorer with an overall tally of 5-83.

A post appeared on the Official GAA Twitter account – a rather telling tweet since a defence of the decision to hike All-Ireland ticket prices was offered by Croke Park, only a few hours earlier in the Irish Independent.

The tweet declared: “A limited number of terrace tickets for Sunday’s GAA All-Ireland Hurling Final have gone on public sale...”

With only five days to go until the hurling showpiece, and considering the final’s match-day programmes were to undergo a 40 per cent price increase on the day, the timing was regrettable. That the PR team had already been sent out to defend the ticketing strategy pointed to either a mindset of obstinacy or simply a poor calculation of patent public sentiment.

Perhaps the €90 tickets could be successfully defended had there been a logical system in place, whereby somebody sitting in the nosebleeds – or the front row of the Davin Stand for that matter – wasn’t obliged to spend the same amount for a ticket as somebody the swing of a cat away from the Ard Chomhairle section.

There may be close to full-house attendances for All-Ireland finals at present; with levels of disillusionment continuously rising, that trend won’t last long.

“I would find it incredibly difficult to think about going to Dublin, never mind the match.” Wexford forward Conor McDonald spoke candidly about the hurt of a All-Ireland semi-final loss to the Three Man Weave GAA podcast, explaining that he was considering staying away from this year’s final as a result.

It may only be his first season, after an era that reaped three All-Ireland minor titles in four years under Jeffrey Lynskey, but Galway minor manager Brian Hanley was sticking to his credo.

Speaking to TG4 before Sunday’s throw-in, he insisted that this was just the beginning of a journey for his team of teenagers, not the “best day of their life” as some may see it. These are 16- and 17-year-old lads after all, youngsters with possibly no recollection of Croke Park as a building site or Rule 42 or any of the era preceding Kilkenny’s famous four-in-a-row.

On Sunday, the effectiveness of Hanley’s approach was evident in abundance.

For the Galway youngsters played like they were in the midst of a trial game. And without losing any of the intensity required for championship fare, they bounced and scurried around the fabled expanses of Croke Park like it was Athenry, all the while retaining a steely composure – like puppies on Ritalin, eyes only for the next ball.

That balance between intensity and poise is a hard one to perfect, but when a manager vocally asserts his belief that a hurling career lies ahead either way, youngsters can express themselves in the manner exhibited yesterday. Something for all underage trainers to note.