Ballyhale and Corofin can extend their proud respective records 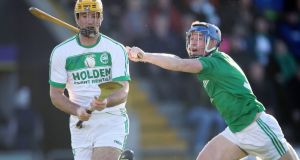 Ballyhale Shamrocks’ Colin Fennelly on his way to scoring a goal against Naomh Éanna in the Leinster semi-final at Wexford Park. Photograph: Bryan Keane/Inpho

Galway v Wexford, Pearse Stadium, 1.30, Live TG4
The first of two championship rehearsals, this one is a renewal of a similar meeting 12 months ago, won narrowly by Wexford.

David Fitzgerald’s team have been impressive to date and last week’s dispatch of Kilkenny was very welcome regardless of being played in a tempest.

The fact that they held back Paudie Foley, Cathal Dunbar and Aidan Nolan on the bench testimony to the broader panel developed so far. Galway have been trying the same approach but it’s unclear how many of the tyros will be forcing the issue with championship selections. Still, home advantage. Verdict: Galway

Waterford v Clare, Walsh Park, 3.0, Live TG4
Bracing results for both of these counties in their final regulation matches. Waterford’s comeback against Galway may have been – like all of last week’s resurrections – wind-assisted but it was a decent conclusion to Páraic Fanning’s first regulation season.

Clare have injury issues but welcome Séadna Morey back for his first start this year. They have the worst defensive record of the teams left in the competition and Waterford the most productive attack – but against a different calibre of opponent. Verdict: Clare

Tipperary v Dublin, Semple Stadium, 4.30
On one level for Dublin, it’s an unwelcome third knockout date in seven league seasons with Tipp (average defeat, 0-13) but on another it’s a zero-pressure crack at a big name for Mattie Kenny, who will be pleased to have topped Division 1B even in the odd circumstances of this year’s league. Liam Sheedy’s team blazed back into a bit of form in Cork after their “warm-weather training”, albeit apparently with the home side’s consent. Verdict: Tipperary

Division 1A 5th/6th place playoff
Kilkenny v Cork, Nowlan Park, 2.0
A strange, apparently meaningless fixture (in which as has been pointed out, the losers might be better off by securing a berth in the less demanding of next year’s Division One groups) has been given life by a squabble over whether it might serve the purpose of burning off a couple of suspensions before championship (not, according to the rule book).

Neither Séamus Harnedy nor Conor Delaney are likely to play and the dispute can be re-engaged closer to May. Both teams had outings to forget last week but when they played at the start of the season, Kilkenny won easily.  Verdict: Kilkenny

Thomas’s were pushed all the way by Cushendall in the semi-final whereas Ballyhale broke Ballygunner by the end of theirs. Thomas’s will be more resilient and have All Star quality in David Burke and Conor Cooney but lack impact off the bench, which is an issue with Kenneth Burke already ruled out because of injury.

They won’t however be pushed around nor are they likely to pull back like Ballygunner and leave the Shamrocks’ half backs to their own devices.

The Kilkenny champions got good performances out of their younger generation, most notably schoolboy Eoin Cody, who finished with 1-4, and compensated for a relatively subdued display from TJ Reid.

In general though their forwards look more menacing and like Thomas’s they have plenty of county stardust with two former Hurlers of the Year in Reid and Michael Fennelly, who despite injury concerns is expected to play. Verdict: Ballyhale Shamrocks

SFC: Corofin (Galway) v Dr Crokes (Kerry), 3.45 [Live, TG4]
With three of the last four All-Irelands between the teams, this year’s football final is an intriguing prospect. Two years ago, the Killarney side comfortably beat Sunday’s opponents in the semi-final on the way to winning the Andy Merrigan Cup but that was their last championship defeat.

They have such a grip on Galway at this stage that their preparations are tailored accordingly and for defending champions they looked remarkably fresh and sharp in expertly defusing the highly-rated challenge of Gaoth Dobhair in the semi-final.

Crokes, shrewdly managed by Pat O’Shea, haven’t had the same stress testing on the road here but they had to fend off Mullinalaghta in their semi-final with 14 men for most of the match.

Tony Brosnan, sub in the All-Ireland win two years ago, is now a key influence in attack together with the experienced Daithí Casey and Brian Looney. Defence is also well balanced between the composure of Fionn Fitzgerald and the expansive instincts of Gavin White. Promises to be a belter.  Verdict: Corofin.