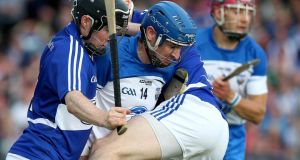 Waterford ensured their campaign progressed into July when overcoming a determined Laois unit on a balmy Saturday evening at Walsh Park.

A brace of Shane Walsh goals and the reliability of free-taker-in-chief Pauric Mahony helped the hosts extract at least some of their Munster Championship disappointment from the system in front of 5,025 paying customers.

Laois, whose progress under Séamus ‘Cheddar’ Plunkett was again in evidence during several stages of this fixture, got off to the perfect start after just 57 seconds.

A brace of Mahony frees in the third and fifth minutes respectively eased the palpable nerves among the home support before Stephen Maher (a free) and Charles Dwyer added to Laois’s tally.

Willie Hyland, Laois’s best player on the night, striking five points from play in total, opened his account to level matters, before Mahony found his range with another free only moments later.

Joe Campion struck impressively to level affairs once more in the 16th minute before Michael Walsh released Mahony for an equally impressive point during the most end-to-end phase of the match.

Inside forward Tommy Fitzgerald set up Hyland for another Laois leveller before Shane Walsh struck his second goal in the 22nd minute.

Following another surging run by Kevin Moran, the De La Salle man was twice denied brilliantly by Laois goalkeeper Eoin Reilly. But Walsh was on hand to bat the ball into the net after Reilly’s second save to put three points between the sides for the first time.

Between then and half-time, Waterford clicked through the gears, as points from Darragh Fives, Jake Dillon and three Mahony frees left them 2-10 to 1-5 up at the break.

However, Cheddar Plunkett will have taken solace from the effort produced by Laois after the interval, with young substitutes John Purcell and Ross King striking a brace of points each during a well-contested second half.

Mahony kept the scoreboard ticking over for Waterford, as did Jake Dillon who added two more points to his tally, while substitute Séamus Prendergast struck the hosts’ score of the match after 39 minutes.

For Laois, the aforementioned Purcell made a dynamic introduction, while Hyland, who impressed under Davy Fitzgerald’s watchful eye at Limerick IT, caught the eye of many home supporters.

“Obviously we were on the end of a bad start so it was good to see the way we refocused and just went for it,” said a largely satisfied Waterford manager Derek McGrath.

For Cheddar Plunkett, there was much to be proud of despite the disappointment of his team’s championship exit.