Richie Power: ‘To me, Kilkenny’s problem is at the roots’ 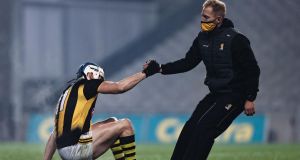 Kilkenny’s TJ Reid gets a hand up from Michael Comerford after the All-Ireland SHC semi-final against Waterford at Croke Park. Photograph: Tommy Dickson/Inpho

Kilkenny are wintering like they’re other people. Brian Cody has been returned for another year but not without some rumbles of dissent, faint but unmistakeable, around the county. Paul Murphy and Ger Aylward retired last week, Colin Fennelly made the slightly bizarre decision to take a year out at the age of 31. Three All Stars gone in four days, all within a week and a half of Cody being confirmed for a 23rd season.

You wouldn’t necessarily call it a crisis. Not any more than it was already, at any rate. No All-Ireland in five seasons and no particular prospect of one in the immediate future will always be enough to set their teeth on edge in Kilkenny.

But if you take it down to brass tacks, neither Murphy nor Aylward were fixtures in Cody’s first team any more. Murphy’s army commitments had seen him slide down the billing over the past couple of seasons and even though Aylward is still only 28, he had never really recaptured the form of his breakthrough year of 2015.

No two ways about it, though – Fennelly is a loss. Despite having been dropped for the All-Ireland semi-final against Waterford, he was still Kilkenny’s second most reliable source of goals. Since their last All-Ireland win in 2015, Kilkenny have scored 39 goals in championship hurling. TJ Reid has 14 of them but Fennelly is next on eight. He was the only Kilkenny player to score at least a goal in each of the past five seasons. Even TJ hasn’t managed that.

“It is a strange thing to do at his age,” says former team-mate Richie Power. “I can see his thinking in one regard in that the last few years have been unbelievably long for the Ballyhale lads. Maybe he will come back and play for another few years but I don’t know if there’s an awful long time left after you get to 32.

“TJ might be able to do it because he’s in such good shape and he has the gym and all that. But for most people, there’s not a lot left after 32. Maybe Colin sees this as a chance for a break but it’s an odd decision to make at 31, it really is. Is the appetite going to be there when he comes back? I don’t know. Only he knows his own thinking.”

One way or another, it’s hardly an ideal situation for Kilkenny heading into 2021. Though nobody has the first idea right now what the season will ultimately look like, we can only proceed as if some sort of championship is going to be played. On that basis, Kilkenny carry precious little momentum into the year with them.

A lot of the good of the 2020 Leinster title was washed away in the Waterford tide that overwhelmed them in the All-Ireland semi-final. Since then, DJ Carey has left the set-up after just one season as coach, with Clara man Conor Phelan announced as his replacement last week. Cody’s mantra of wanting a settled spirit around the place has always been usefully indefinable. But whatever it is, it would be hard to argue this is what it looks like.

“The way Kilkenny people are thinking is that five years without an All-Ireland is just something supporters haven’t been used to for a very long time,” says Power. “The group of players that are there, we saw in 2020 how good they can be but also the other side of them as well when it comes to tactical awareness.

“There was always going to be a turnover of players, it was always going to come to the stage where we needed to rebuild again. And that’s what we’re doing. Is Brian the right man? Well, he’s rebuilt three or four times at this stage so who else has that track record? Nobody. He knows the process better than anybody.

“I always felt that with the short turnaround this season, it would have been nearly impossible to get a manager in place if it wasn’t going to be Brian. The big thing is, what manager would go in in these circumstances? A shortened turnaround, no collective training for a few months, Covid rules and regulations, no guarantee if the league will even happen. And on top of all that, you’re coming in to replace Brian Cody. It’s not ideal circumstances.”

Not when, as general agreement would have it, the raw material is of a standard below what was once taken for granted in Kilkenny. Go back to that goalscoring list and extend the time period out to the past seven seasons. In that time, Kilkenny have scored 60 goals – Reid (22), Fennelly (nine), Richie Hogan (seven) and Aylward (five) account for 43 of those.

Next on the list? Power himself, who scored four goals in the 2014 campaign before retiring at the end of an injury-ruined 2015. He’s fifth on the list despite it being six seasons since he last hurled for Kilkenny and seven since he started a match.

“That’s a scary statistic,” Power says. “I’m sure if you went through other teams, you wouldn’t come up with a stat like that. We are struggling for forwards, no doubt about it. TJ will be hanging up the boots eventually, Richie Hogan definitely has another couple of years in him but when those two go, who is coming in to take over?

“To me, Kilkenny’s problem is at the roots. We need to get back to underage and development. We’ve won two minor All-Irelands in the last decade and the last one was in 2014. We’ve won no under-20 or under-21 All-Ireland since 2008. That’s very, very worrying. You look at Limerick, you look at Tipperary, they are winning at underage. We’re not. That’s the worrying thing for me.”

It’s not as though Kilkenny will run out of players. They did have the 2019 Young Hurler of the Year – Adrian Mullen was the first Kilkenny winner of the award since Cha Fitzpatrick in 2006. But a brutal cruciate injury wiped out his 2020 and though he looks set to be named as captain for 2021, recovery never comes with guarantees. Eoin Cody has been shortlisted this time around so it would be wrong to say the cupboard is completely bare.

But a hurler here and a hurler there is never going to be enough. Not in Kilkenny, regardless of who is managing the team. For Power, the system needs overhauling. It might already be too late for the current crop and it might mean a few more years of frustration. But he doesn’t see any choice in the matter.

“It’s something that we need to take a really hard look at. The jump from under-20 to senior is so huge and if you’re not winning, then players can get lost very easily. Kilkenny don’t have anything for that interim step. When it was under-21, that extra year made a lot of difference in terms of being able to step up.

“You look at the under-20 team that lost to Galway a few weeks ago. Kilkenny need to find a way of keeping those guys at an elite level in that period before they’re ready to join the senior panel. I know there’s changes happening in there as we speak as regards underage development but that’s not going to be much use to Brian in the short term.

“Kilkenny led the way in terms of development back in the 2000s but I think success meant we took our eye off the ball. Now, we need to get back to the grassroots and revisit it. So what if we don’t win an All-Ireland in the next five years? It’s more important that we put in a process like Limerick had, like Cork have been doing, That’s where we need to find results.”

A restless period in Kilkenny hurling. How they navigate it will be one of the stories of whatever season we eventually get.