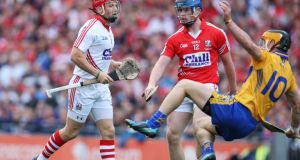 Conor Lehane clears Clare’s John Conlon out of the picture as Anthony Nash makes his way up the field to take a penalty during last year’s drawn All-Ireland final. Photo: Cathal Noonan/Inpho

Paul Flynn, the former Waterford All Star and during his career one of the deadliest free takers in hurling, summed up the drama of an Anthony Nash penalty. He was in Semple Stadium last Sunday when Cork’s Patrick Cronin was fouled close to goal by Waterford’s Liam Lawlor.

“There’s no question that in the stands last Sunday when Cork were awarded the penalty,” says Flynn, “everyone that was reading a programme or looking at their phone put away the programme or the phone and got excited about the fact that Nash was on his way down the field.”

During the week the GAA has moved to bring down the curtain on this particular piece of theatre amidst rising concerns about the health and safety of defenders on the line so no-one will be allowed to flick the ball forward from penalties and 20-metre frees and chase the dropping ball in the hope of making a thunderous connection some seven metres – at least – closer to goal.

It would have been hard to imagine last autumn in the aftermath of the two stunning All-Ireland finals between Cork and Clare that their eventual reunion in this year’s Munster hurling semi-final, tomorrow in Thurles, would come packaged in even further drama.

There’s irony in Nash and his contentious dead-ball technique being back in the news because it was in last year’s All-Ireland final and replay that it came fully to prominence – even if the publicity is now about the prohibition on the Cork goalkeeper’s ingenious initiative.

Last year, he was one of the key personalities during his team’s at times unlikely march towards the All-Ireland and he was shortlisted for the Hurler of the Year award.

He was never terribly comfortable with the routine association between himself and the technique: frees, motions to congress and reinterpretation of rules all became eponymous connections with ‘Anthony Nash’.

“I get the impression he’s just relieved that the whole controversy has been resolved for the time being,” his manager Jimmy Barry-Murphy told this newspaper.

“At the end of the day he’s a goalkeeper and was getting tired of all the fuss surrounding the frees.”

The clarification or new interpretation fast-tracked by Central Council into operation for this weekend’s matches became a matter of urgency after Nash had been accosted by his Waterford counterpart Stephen O’Keeffe rushing off the line in last week’s quarter-final replay. Forcing the issue even further was the peculiar – and hitherto little known – reimagining of the rule by the referees that validated O’Keeffe’s actions.

It’s characteristic of Barry-Murphy to make the best of trying circumstances. After all this was someone who, having seen his team deprived of an All-Ireland by indulgent time-keeping – however much of a conjuror’s trick that might have been – had the heroic forbearance to go on television immediately and declare himself relieved with the draw and acknowledge that Clare had been the better side.

He does however echo a broader concern that the new dispensation not allowing penalties and 20-metre frees to be hit from closer than that distance represents a shift in favour of the defending – and fouling – team.

“One point I wanted to make was that in football they’ve moved the penalty closer to goal but now in hurling we’ve gone the other way, which benefits the side committing the fouls.”

The reunion of the All-Ireland finalists also focuses on the difference of opinions between the counties. After Clare’s first league match last February, manager David Fitzgerald supported the motion – later withdrawn – to congress to stop the practice of flipping the sliotar as far forward as the 13-metre line before striking.

Flynn is curious as to whether the high visibility of the goalkeeper making his way up to take the shot has drawn disproportionate attention to Nash’s role.

“If Pat Horgan was doing this or Tony Kelly or Lester Ryan and TJ Reid for Kilkenny or any outfield player doing it, would there be the same hullaballoo? Bur it’s different when a chap is going up the whole length of the field with a goalkeeper’s hurley and taking on another goalkeeper, who’s really excited about wanting to save it.”

This theatrical element is, according to Barry-Murphy, an important part of the effect because the technique hasn’t been a guaranteed source of goals. Of the four 20-metre frees and one penalty awarded to Cork in the All-Ireland final matches last autumn, Nash converted just two for a return of 40 per cent.

“No,” says the manager, “the conversion rate hasn’t been as high as people seemed to think. The impact for us was sometimes as much in other aspects. It gave us a lift in both games because of the drama of it and the impact it had on the crowd and being picked up in the media.”

Ten years ago Paul Flynn famously turned a Munster final against Cork when Waterford were down to 14 men after John Mullane’s red card.

His team trailing by two, he felt that a free 30 metres out offered the possibility of changing the course of the contest but was also acutely aware that the cost of not achieving the desired result would also be substantial. In the event he hit a remarkable shot with his customary top spin on a dipping trajectory into the Cork net.

The sun was so bright he couldn’t follow the shot and only knew he’d succeeded by the reaction of the crowd.

Flynn agrees about the impact of such moments and how extracting maximum price for frees is as much about the psycho-drama as the scoreboard.

“Yeah and especially once or twice when it didn’t happen but went over the bar or was stopped by the crossbar or something. That day in Thurles we were down to 14 and it was a handy point so if it hadn’t gone over the bar or into the net, things could have gone the other way so it was a gamble in every sense.”

“My recollection of both days,” according to Barry-Murphy, “was simply that we were constantly chasing down the game, playing catch-up. Their pace and athleticism stood out – their movement was so impressive and their use of the ball. We spent both days just being reactive.”

Yet Cork had soundly defeated Clare in last year’s Munster semi-final. Davy Fitzgerald’s team however reconstituted while travelling the qualifier route and arrived in the All-Ireland with momentum, a force-field of pace and touch.

“One of the big differences was Croke Park. The pitch there is totally different and takes on a life of its own. The speed of it is extraordinary – no comparison with other surfaces. It’s big but I don’t know if it’s actually bigger than Thurles and if you tell me Thurles is bigger I’ll believe you (Semple Stadium is fractionally longer but narrower). But Croke Park plays very big and seems to reward more athleticism and better touch.

“You could almost consider picking a different type of player if you were playing there.”

Tomorrow Cork and Clare are back in Munster. Barry-Murphy’s not sure if, with the new interpretation, it makes sense any more for his goalkeeper to take the long walk every time the 20-metre line beckons.

“We’re not decided. Patrick Horgan will definitely be an option now and obviously we’ll have to consider carefully whether it’s worth going for goals or not, depending on the match situation.”

More calculations but as he says himself, “you’ve got to move on and put it behind you.”

Monaghan and Mayo face off with relegation a real prospect 06:00
Should fans be allowed drink in the stand at sporting events? 06:00
Gerry Thornley: England primed to show their best against Ireland 06:00
Bad weather wreaks havoc with hurling league format again 05:29
Irish Open: How to get there, how to get tickets, where to stay 05:00
Crossword Get access to over 6,000 interactive crosswords