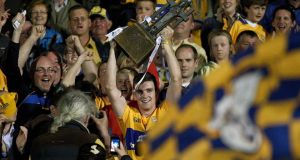 All week Clare had battled the dangers of overwhelming favouritism. Dublin’s fate in the football semi-final against Donegal was circulated as a vaccine against presumption. Symbolically, just before throw-in at Saturday night’s All-Ireland under-21 final Australia was beaten at Leopardstown and after Clare had banked their expected three-in-a-row they paid tribute to opponents Wexford.

“The lads were really made to earn it,” said joint manager Donal Moloney. “I thought Wexford were just incredible. They kept coming back. They have superb players and a never-say-die attitude. This game will stand them in good stead and I believe a lot of them are underage again next year. We earned every second of it out there tonight.”

He reflected on the landmark victory, previously accomplished on just three occasions over the 50 years of the championship.

“It is a big achievement. Credit for this – there are a few clubs in Clare, the likes of Ballyea, Clonlara and Cratloe – they wouldn’t have produced huge volumes of players in the past – suddenly produced a generation of super players.

“Along with that they have been willing to work ferociously hard and live the lifestyle of an athlete. That is so important because there are only inches in these games. There were only inches there at times tonight. It is a great achievement by them. It is probably hard to take it all in right now. In time they will reflect back and think what an era it was for them.”

Although the team again performed superbly as a collective, there was no doubting the input of key personnel, none more prominent than captain, Tony Kelly, who scored seven points from play and centrefielder Colm Galvin.

“They are magical, they stand apart,” according to Moloney. “You can talk about coaching and systems or whatever, but they just have everything in terms of athleticism, great leadership qualities, and the right mentality to make the right decisions 99 per cent of the time.

“That’s a rare combination, only the really, really great hurlers have that. The first I saw Tony Kelly was back in the end of 2009 at trials. I went home and told my wife that I had seen a new Henry Shefflin and he was going to be wearing the Clare colours. He’s a sensational player and such a team player.

“He worked so hard for the team tonight. He was tackling, tracking, blocking down, and winning ball he shouldn’t have won. He’s just a super guy.”

Joint manager Gerry O’Connor emphasised the importance of that leadership, given the substance of Wexford’s challenge.

“The bottom line about an All-Ireland is, you have to bloody well earn it. Every time we got a bit of breathing space and we got a bit of momentum and a six or seven point gap, Wexford – to their credit – kept coming back.

“But the key point is – and we’ve asked it of these guys all year; ‘have you got the leadership? Can you stand up when it matters?’

“And the real leadership was shown out there . . . not in the concession of the goals, but in the response to the goals. Every time they scored a goal, Tony Kelly or Peter Duggan or Bobby Duggan demanded the puck out and scored. Tony was incredible in his response to the three goals Wexford scored today.”

Kelly took time after the match to remember an exceptionally difficult week for his team-mate and club colleague, wing back Gearóid O’Connell.

“That just shows the character of the man. His father passed away last week. I suppose I went up to the field on Thursday morning and he was outside pucking the ball.

“He was on about going training on Friday night. He trained over the weekend and he came in to training with a smile on his face, a hard thing to do and I suppose it’s credit to the man to come out here this evening, tog out and put in big performance as well.”

Moloney also paid tribute to the player who gave a committed performance and scored a second-half point.

“It’s been an incredibly tough week. We speak a lot about resilience and courage a lot as a group but for Gearóid O’Connell to do what he did in the last week and a half with the grief that he went through, it’s just incredible to be able to go out there and play like that tonight and give so much after such a tragedy.”

Although 23 of the 37-strong panel are again eligible in 2015, the management team will make no decision on their own future until the end of this year.

“I’ll be perfectly honest with you,” said O’Connor. “We sit down in December every year and we sign off then if we’re lucky enough to have a medals presentation and it’s over that Christmas period that we look at anything to do with the future. It will be absolutely the same this year.”

Wexford manager JJ Doyle was understandably proud of how his team had flung all they could at the champions.

“We genuinely felt coming down we had a great chance. I suppose a few things maybe didn’t go our way. We maybe didn’t get the luck of the break or that but I suppose we were beaten by the better team on the night. As hard as it is to take getting beaten, it’s a little bit easier when you know the opposition are the quality they have.

“Very proud of our lads: many a team, and I said it to them in there, would have thrown in the towel when we were nine points down but it’s not in these lads to give up. It could have been a completely different dressing room there because that game could have been 15/20 points of a defeat.

“That would have been very, very hard to take but we just kept going and kept going and I’m very, very proud of those guys. They’ve given absolutely everything to us this year – I couldn’t have asked for any more and listen, 10 of the starting team are under-age again next year.

“We’ll dust ourselves down, they’ll go back and play the club games now the rest of this year and please God we’ll drive on at under-21 again next year.”