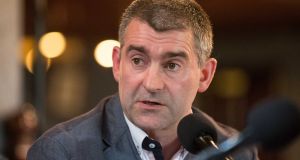 Liam Sheedy: “I’m going go give it 100 per cent to get the team to play to its potential.” Photograph: Cathal Noonan/Inpho

Liam Sheedy’s second term in charge of Tipperary gets under way against the All-Ireland champions on Friday evening at the Gaelic Grounds (7.30pm) and the Portroe man can’t wait to get started.

He said the GAA landscape had changed enormously since he stepped down in 2010 shortly after guiding the Premier County to All-Ireland success.

But now he’s back in the hot seat and, while he is mixing the post with his job as provincial director of Bank of Ireland in Munster, Sheedy said he’s up to the task.

“In the last two years I have been back working in Munster versus working in Dublin. You just can’t manage the Tipperary team if you’re operating around the M50 or up in the inner sanctum. The journey time up and down is really tough.

“It is going to require me very disciplined in terms of managing my time. Obviously being provincial director with Bank of Ireland, trying to manage an inter-county team is not easy. It might feel professional but there is a day job to be done as well. There are 168 hours in the week – I’ve got to be very selfish with my time and manage it well.

“One of them got their hands on it but the other two were probably saying we were so close. That is the arena you find yourself in.

“The bottom line is Tipperary right now are outside the top six. If I look at my short-term goal it is how can we catapult ourselves into the top six and look to get into the quarter-final stage.”

The change to the Munster championship is one of the major differences from his previous stint as manager but off the field things have altered dramatically as well.

“I even see from my time versus now, the game has moved on, the whole size of your backroom team. It’s going to a new level all the time. I don’t know where it will stop but we’ll try and catch up with it over the next few months.

“It’s very, very full-on. these players are willing to do whatever it takes to be successful. You see the hurling championship now, it’s probably at its most competitive as it’s ever been at. Which is great for the game.

“I think the game of hurling has moved to a whole new platform and level versus other sports. Not just in Ireland. I really do feel it has taken off. I know it’s challenging asking players to play four games in 21 days but I think some of the tweaks they’ve made for 2019 will make that better.

“You’ve got to manage energy, you gotta manage time and you really gotta manage quality. With all the boxes you’re trying to tick in terms of the physical side, skill side, and the whole belief systems, there is a lot to get through. Managing that is a big deal.”

Delivering another All-Ireland for Tipperary is the primary task, of course, but doesn’t feel he’s under any extra pressure having come back into the job after securing a previous title.

“Anyone that is involved in a team is anxious to get to the summit – that’s just a given. I don’t feel any pressure. Not an ounce of it. I’m free as a bird. I’m going in, working with a new team. It’s 10 years on, a new group of players. I’m going go give it 100 per cent to get the team to play to its potential. Wherever that takes us, it takes us. But I’m excited about it. It’s an absolute honour and a privilege to manage your own county.”

He gets his first taste of it again on Friday evening in the Gaelic Grounds in what he hopes will be the first step towards relieving Limerick of the All-Ireland crown.