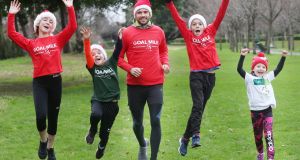 Dublin star Cian O’Sullivan helping to launch the GOAL Mile with Caoimhe (13), Rossa (9), Cuan (11) and Saoirse (6) in Herbert Park, Duiblin 4. Now in its 37th year, the annual event will see tens of thousands people run, jog or walk 130 Miles across the country over the Christmas period. Photo: Leon Farrell/Photocall Ireland

Sometimes it’s easier to talk straight up football. That fairytale victory for Mullinalaghta. That end game collapse for Kilmacud Crokes. And while we’re talking what about Dublin’s quest for five-in-a-row?

For Cian O’Sullivan that’s no great burden right now, not when he’s getting married next Friday to long-term girlfriend Danielle Byrne, around 200 guests expected at the venue in Wicklow. That’s proper pressure.

Losing Sunday’s AIB Leinster club football final is still cutting somewhere inside, spoiling an otherwise memorable year with club and county. O’Sullivan’s provincial club campaign was shaky in parts, ending with a second yellow card and a part in the penalty which ultimately secured Mullinalaghta’s win – a first Leinster win for a Longford club.

“Yeah, disappointing, after a great year for the club, winning a Dublin championship, and then getting to a Leinster final,” says O’Sullivan, a patron for the GOAL Mile on Christmas Day, which he also intends on running before setting off on honeymoon.

“But we’ve been doing a bit of a post-mortem amongst the lads, reflecting on the year, and you have to say it was a success overall. We’re a young team, average age is I’d say 23, 24, and those guys will take a lot from going through that campaign this year.

“And looking back on some of the days being involved with Dublin, like when we were beaten by Meath in Leinster (in 2010) and Donegal (in 2014), you learn so much from the defeats. Hopefully Sunday will be a key point for the club over the next couple of years, like those games were for Dublin.

“Not to take anything away from Mullinalaghta. It’s an incredible thing that they’ve done; winning three Longfords in a row and now winning Leinster as well. But we’re all footballers. We’re competitive. We wanted to go out there and win. It’s just something that the Dublin team has been very good at.

No excuses then – not the nature of the penalty, nor the fact James McGivney didn’t leave the field for Mullinalaghta immediately after seeing a second yellow.

“I haven’t looked back on it to be honest. I probably won’t be looking back on the game for a while, if I ever do. But the only thing you can do is look inward at yourselves, as a group, and question what could we have done differently to make sure that that result wasn’t what it was. That’s the only way you really learn and grow from an experience like that.”

A timely reminder too perhaps that as Dublin begin that quest for a record fifth successive football All-Ireland (and seventh in all for O’Sullivan), no team is too big to fail: Mullinalaghta, a half-parish on the border with Cavan with a population of 447, versus Kilmacud, their membership conservatively pitched at 10 times more.

“It is,” O’Sullivan says of the reminder. “I look back at all the games I’ve played ever, and the ones you take the most from are the ones you lose. And on any given day, any team can win. It does make you really appreciate those winning days all the more.”

“Yeah, it’s a tough one to avoid. It’s a massive challenge for this team. Over the last couple of years something that we’ve got really good at is managing distractions like that coming into the team, whether it’s the attention the team has got because they are winning or the hype in the lead-up to an All-Ireland final or Dublin-Kerry or Dublin-Mayo matches.

“Just focussing on what we are trying to do and achieve and not letting any potential distractions etch in and create any element of complacency with the team.

“That’s been a massive focus of ourselves over the past couple of years and this year that would be the main distraction that we have to be mindful of. The season hasn’t kicked off yet, guys have been away resting up and with their clubs and I’m sure they’ve been getting an earful of it.

“When we get back in the New Year we will batten down the hatches again and focus on what we are trying to do within that room of 35 players and the management team.”

O’Sullivan admits he is injury free, bar “nursing little things”, and, despite limited league time in recent years, he intends on getting straight back in with Dublin once the proper honeymoon is over.

“I feel my mind is very fresh and I want to get back playing as soon as possible. It was a bit of a disruptive year last year with injuries and I really enjoyed my football with the club there. If the body is right for the first round of the league or whenever it is, hopefully I’ll be able to stick my name into the hat. There’s massive competition for places, so getting back in there and playing games is going to be the focus for everyone.”

The proposed rule changes, yet to be experienced, are also something he’s willing to embrace.

“My first thoughts, my immediate thoughts, are that it’s the same rules for everyone. They could end up being the makings of the game. I think it’s time to try and look at it positively. I think it’s a great challenge for teams to try to adapt to these new rules and it’ll be interesting to see how it does pan out.”

* There are 130 GOAL Mile at locations nationwide over the Christmas and New Year period, raising funds and awareness for their aid programmes across the developing world. For details see www.goalmile.org

1 Tipping Point: Eddie Jones’s rhetoric is out of place in a febrile political climate
2 Ireland backrow of O’Mahony, Van der Flier and Stander to be retained against England
3 Triple bogey costs Rory McIlroy as Adam Scott prevails at Riviera
4 On healing and wild hurling: The re-education of Diarmuid Lyng
5 Dan McFarland calls out Ulster’s naivety after loss away to Ospreys
Real news has value SUBSCRIBE