Clare and Wexford have favoured settled teams, everyone else has preferred to mix and match 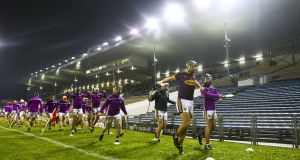 Wexford warm up ahead of their game with Tipperary last month. Photograph: Ken Sutton/Inpho

The week before Waterford played Wexford at the end of January, Derek McGrath gathered his players together and named his team. And before he let them go, he named another – the 15 who would, all going to plan, take the field against Tipperary six days later. The Fitzgibbon Cup matches sandwiched between the first two rounds of the league meant he intended making 11 changes from one game to the next. The upshot was that by the time the final whistle went against Tipp, McGrath had given game time to 29 players.

Davy Fitzgerald took, to put it mildly, an alternative approach with Wexford. Same programme, same two games viced into the tightest window possible, radically different way of going about it. He made just one change between playing Waterford one weekend and Cork the next. Across the two games, he used just 21 players.

On the results, there is no quibbling over what was the better plan of attack. Come that Sunday night, Wexford sat on top of Division 1A and Waterford were anchored to the bottom. Tomorrow, Wexford have a league quarter-final against Galway and Waterford face off against Cork to stay in the division. In any other year, there would be pockets of nervous nelly-ism in Waterford and sky’s-the-limit chat in Wexford.

But not in 2018. Everything this year is informed by the looming edifice of the championship and the prospect of four games in five weeks for some teams and four in four for others. This time next year, there will be a certain amount of consensus on how best to approach the league with a view to being ready for the championship. But for here and for now, everyone is guessing.

“This is my logic,” says Fitzgerald. “And it’s only my opinion, other managers have their own. If I use 24 players in the championship, maybe 25, that will be the max, I think. I don’t think I’ll use more. That means you have 10 players outside the 15 you’re going to pick for the first game in the championship.

“Personally, I think that’s a lot of players. I have 25 players used so far and I have Liam Óg McGovern and Shane Tomkins to come back, they’ll definitely be two that I will use in championship. I can’t see me using many beyond that.”

McGrath is no more certain than Fitzgerald that his approach is the right one. “But,” he says, “everyone has to have a plan and even if it doesn’t work out, it doesn’t necessarily mean the plan was wrong.

“There’s three things feeding into it for us. One, we’re coming to the end of a five-year cycle and there’s fellas who’ve been on the panel for a number of years without getting a chance. So there’s a whole panel harmony angle there. And as well as that, you’re trying to find a couple of players, obviously.

“But there’s also the fact that we’re playing on May 27th against Clare and we have four games between then and June 17th. So we have four games in 21 days. So in terms of simulating what happens in May and June, now is the time to do it. You’re going to need a bigger squad.

“Now, I’m not just saying this because we find ourselves in a precarious position this coming weekend but I don’t think there’s such a big stigma any more in the gap between 1A and 1B. It’s not the issue it was in other years. The league and All-Ireland champions are going to be in 1B for another year and I don’t think Micheál [Donoghue] will be losing sleep over it.”

The general trend of the numbers across the five group games in this year’s league (see panel) suggest that more managers have plumped for McGrath’s approach than Fitzgerald’s. Waterford, Tipperary, Kilkenny and Cork have all used more players than in 2017, albeit only one more in Cork’s case. They’ve all increased the number of starts they’ve handed out.

In broad brush strokes, Clare and Wexford have favoured settled teams, everyone else has preferred to mix and match. Of the 27 players who have started all five games in Division 1A, 16 play for Clare and Wexford. Of the 16 who’ve played every minute of every game, 10 belong to those two counties. For Fitzgerald and Clare’s co-managers Gerry O’Connor and Donal Moloney, stability looks to be the key building block with the summer in mind.

“Apart from your first 15, you have a goalie, you have probably two or three back-up defenders that you know you can go to war with, you probably have a midfielder or two and probably three or four forwards. That’s roughly how I would think about it – you want eight-to-10 players as your back-up. Now someone might catch a bit of form outside that but it would probably only be one.”

From the outside looking in, it’s pointless being dogmatic about what these numbers mean, of course. Every team is in a different place in their development, chasing different needs. Brian Cody has started 30 players over the course of the league – and that’s without Richie Hogan, Colin Fennelly or Paul Murphy playing a minute. Tipperary have used 32 – and that’s with Seamus Callanan and John O’Dwyer sidelined for it all.

You would imagine Mick Ryan is more confident of the make-up of his championship 15 than Cody at this stage and yet their numbers are relatively similar. Nobody has spread the minutes around his panel more widely than McGrath but he readily concedes he’s flying just as blind as the next man.

“There’s a certain solace in that for managers. Because you’re going to try things and if they go wrong, you learn from it. Up until this year, you could have picked 11 or 12 of our team for most games with your eyes closed. But we just feel there’s going to be a fall-off during the summer with injuries inside that 21-day period. So we have to plan for that.

“For instance, we played relatively well against Cork in Páirc Uí Chaoimh but we decided to rest Pauric Mahony the following week against Clare and give Patrick Curran the frees for a game. Because you just don’t know what’s going to happen. Pauric could get injured halfway through the first game against Clare and all of a sudden we will need a free-taker who can perform in a pressurised environment. But if we haven’t tested him in that pressurised environment, it’s unfair to expect Patrick to step up.

“So you can risk a downturn in performances because you don’t have the fluency of playing the same team in each game. I’m not saying you’re taking the league for granted but you’re using your full panel. And the harmony within your panel is really good then because everyone feels they’re being exposed to that level.”

Who’s right? Who’s wrong? The verdict won’t come in until the summer’s story is told.