The GAA weekend that was: Further signs of the healthy state of Limerick hurling 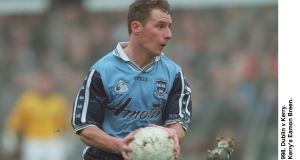 Current Dublin manager Jim Gavin in action for the county in the 12-point defeat of Kerry in in the league clash at Parnell Park in March 1998. Gavin scored three points on the day. Photograph: James Meehan/Inpho

Dublin-Kerry: the delve for 12

In the aftermath of Dublin’s big win over Kerry in Croke Park, there was some discussion about whether the 2-17 to 0-11 margin represented a record in the fixture – from Dublin’s point of view.

It doesn’t take a photographic memory to recall that Kerry have handed down worse beatings to their rivals with the 17-point margins of 2009 and 1978 standing out as high-profile All-Ireland championship encounters.

The scale of Dublin’s victories tends to be more modest and even the current unprecedented run in championship of four uninterrupted wins has come down to margins of one, seven, three and two points.

Surprisingly the answer wasn’t as far away as might have been imagined. Twenty years ago this coming Thursday, Dublin also beat Kerry by 12 points, 0-18 to 1-3, in the league at Parnell Park. And current Dublin manager Jim Gavin played a key role, scoring three points on the day.

The outcome was significant because at the end of a season in which the league groupings had been mixed up with a view to refreshing the divisions from 1999 – top two to Division One, third and fourth to Two etc – Dublin just about held on to top ranking in a 16-team Division One, split into 1A and 1B.

Kerry however fell into the lower half of the league for the first time. This was particularly unexpected, as the county had won its first All-Ireland in 11 years the previous September and had followed that by winning the first league fixture against Cavan – notable for its being played in New York to mark the 50th anniversary of the Polo Grounds All-Ireland final between the counties.

The new arrangement provided for some novel fixtures as, exactly a year after Dublin’s big win, Kerry had to go to Ruislip to play London (they won by 3-14 to 0-4).

Dublin’s big win didn’t have much impact on the 1998 championship, however, as Tom Carr’s side lost their Leinster quarter-final – that was that in those pre-qualifier days – to Mick O’Dwyer’s Kildare, who in turn would also beat Kerry in the All-Ireland semi-final before losing the final against Galway.

Sunday’s decisive AHL Division 1B encounter between Limerick and All-Ireland champions Galway in Salthill had already attracted its share of attention with Limerick voices making it plain last week that despite all the talk of the second tier being an ideal platform for any team, they wanted to be in Division 1A.

“We were tired of being in 1B,” was manager John Kiely’s reaction to finally having secured promotion. The benefit to morale should be substantial, as this wasn’t achieved under the cover of darkness; Limerick made clear their ambition.

The county’s weariness and the reasons for it are fairly understandable. Back in 2011, having done what was required for promotion from the old eight-team Division Two, Limerick found themselves regraded as the top two groups were redefined as six-team divisions.

It’s not as clearly remembered but Wexford were equally disadvantaged, as they had preserved their place in Division One with an unexpected draw against All-Ireland champions Tipperary.

Anyway, it was the start of Limerick’s long and until Sunday, unavailing campaign to return to the status that they had by right won on the field when defeating Clare in that April’s divisional final.

It’s taken seven years and four managers to complete the return journey. Last season, Limerick came third in the table, behind promoted Wexford and Galway but for the previous five seasons, they had managed four second-place finishes and in 2013, a table-topping campaign ended in what would be familiar disappointment when they lost the final to Dublin.

The continuing angst was making everyone else so uncomfortable that the format was changed to abolish the promotion play-off and simply send up whoever finished top of the table. Since that revised dispensation, Limerick never quite managed to come first again – until now.

This displacement hung like a cloud over the county. From the start, the cost of playing in a lower division was estimated at €100,000 between lower gate receipts and loss of programme sales.

Manager John Allen in 2013 argued that championship progress would be impossible for any county stuck in the lower division. That apprehension was proved unfounded when Limerick themselves won a Munster title that very year – although on the day of the victory over Cork at the Gaelic grounds, Allen expressed his surprise that such a feat had proved possible.

Strangely, the reputation of the division began to take off from this point on. Dublin won a first Leinster in 52 years the same summer having campaigned with Limerick. A year later Cork emulated the feat and and in the past three years, teams from 1B have won the actual league title and last year the final impediment appeared to fall when Galway – who hadn’t even been promoted – won the All-Ireland.

Yet Limerick’s focus hasn’t wavered: they wanted to be up playing the best teams in what has been a hugely competitive top flight and weren’t afraid to do it the hard way.

Having travelled to the home of the double champions, they gave up cheap scores, fell eight points behind at half-time, by which stage they had 11 wides – a total that in the end reached nearly 20 – but still dug in to take the lead for the first time through Cian Lynch in the 68th minute.

There has been so much happening within the county in hurling that the outcome will come as good news in Croke Park. Any county that has raised its profile to the extent that Limerick have managed deserves its reward: Ardscoil Rís have won five Harty Cups this decade, the county minors have been in two of the four most recent All-Ireland finals and at under-21 they have won two of the last three.

Fitzgibbon Cup may not define county fortunes but the last four have been shared between Limerick colleges, UL and Mary Immaculate.

Next Saturday, county champions Na Piarsaigh will go to Croke Park hoping to regain the All-Ireland won two years ago in what was a first for the county. Kilmallock reached the final in 2015.

A rising tide lifts all boats and finally the Limerick seniors are back on the high seas.