Holden confident Kilkenny still capable of mixing it with the best 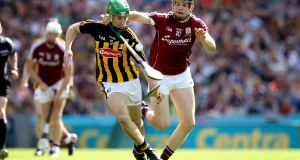 Joey Holden: “I’ve no doubt that we’ll be a match for any team we meet later in the championship.” Photograph: Ryan Byrne/Inpho

It’s a sign of hurling’s changing times that a return to Croke Park for Joey Holden brings queries about Kilkenny’s difficulties there.

The defender’s troubles in the 2016 All-Ireland final, when Kilkenny’s full-back line was filleted by Séamus Callanan and a rampant Tipperary attack, have been well documented.

The team didn’t get to play there at all then in 2017 and featured just once at Croke Park in 2018, drawing with Galway in the Leinster final before losing the replay in Thurles.

There may be happier times ahead for Holden who will return with Ballyhale Shamrocks to GAA headquarters on Sunday week for the AIB All-Ireland club final but the feeling is that Kilkenny have a distance to travel before they can reign at Croke Park again.

“I wasn’t on my game that day,” acknowledged Holden of the 2016 final, the game that precipitated the decline of a superpower.

“It’s not really talked about amongst us,” said Holden, responding to a statement that three seasons without an All-Ireland win since 2015 is the longest they’ve gone under Cody.

“I didn’t even know that until you said it there. I suppose it is a long run in Kilkenny given the tradition there over the last decade or so but we just have to believe in what we’re doing in training.

“If you look at the Kilkenny club championship, at how tight the games are and the attitude from all the club players, it’s fantastic, they go hammer and tongs at each other.

“So if we can bring that into Kilkenny, I’ve no doubt that we’ll be a match for any team we meet later in the championship. Lads are getting valuable game-time now at the moment and they’re going to use that experience and bring it forward and hopefully we can have a good, strong championship this year with Kilkenny.”

Kilkenny, minus Holden and the Ballyhale contingent, have shown the best and worst of themselves so far in Division 1A of the National League, beating Cork and Tipperary and falling to Clare and Limerick.

On Sunday, the holders travel to Wexford seeking a win to generate some momentum for the knock-out stages.

Holden feels that, regardless of the outcome, Kilkenny are still capable of beating any county on their day.

“Absolutely, we lost to Limerick by two or three points last summer,” he said. “We went ahead with maybe five minutes to go and they got a couple of great scores and won it. Look at the amount of Limerick games that were draws, there were replays, they were barely getting over the line. I’ve never seen a hurling championship so close with so many teams that could win it, and with so many teams that can provide shocks.

“If you can get on a roll of confidence and get winning games, that’s what’s key. I think Limerick built that confidence for themselves, they had young lads driving it on, thriving, and they just kept winning. Winning becomes a habit then and if you can get that habit, it’s going to be priceless.”

It remains to be seen if Holden gets to play with Kilkenny in the league, a club versus county dilemma that fellow Ballyhale and Kilkenny player Colin Fennelly has already bemoaned.

“It’s hard to say it’s difficult because if you’re getting this far it means you’re winning with the club, it means you’re on a good run and you’re really enjoying it,” said Holden.

“It is difficult I suppose looking at Kilkenny, seeing the games you’d probably be involved in and that you’re not involved in. It gives you a chance to step back and see how things are going.”