Dublin handled league differently this year but at what cost? 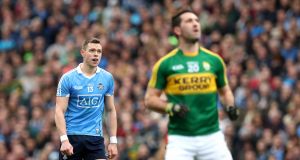 Dublin’s Dean Rock looks on as he misses a late free to bring the league final against Kerry into extra time. Photograph: Ryan Byrne/Inpho

Here’s a story: The multiple All-Ireland champions had to launch a late blitz to come from behind to defeat Monaghan and reach the league final. There they faced old rivals with an influx of new faces and although hot favourites they were unexpectedly beaten in an exciting match.

What followed next is instructive for both Kerry and Dublin whose predecessors contested the 1987 league final but with the roles reversed as described. For Kerry 30 years ago, defeat was the canary in the mine and the following summer’s campaign, for what would have been a fourth All-Ireland in a row, ended in defeat by Cork and it would be another 10 years before Sam Maguire was seen in the county again.

For Dublin the success led to, well, virtually nothing. The county wouldn’t win the All-Ireland again for another eight seasons, by which stage just two players remained from that much-feted league success.

Up until Sunday it had been all of six years since Dublin lost a league final and in the meantime they won four on the bounce or in every year of Jim Gavin’s management – a reflection of his demand for performances in all matches.

Most people believed that Dublin would have to tailor this approach in some way this season to avoid fatigue and give players an extended break for this year’s attempt at the All-Ireland three-in-a-row, which the county hasn’t managed for virtually a century.

In a way the early successes of the year have disguised that. Winning the O’Byrne Cup with a development panel became a talking point in itself and a matter of gloomy introspection for the other counties in Leinster – despite which, the three who lost to ‘Dublin’s thirds’ in January – Wexford, Louth and Kildare – were all promoted in the league.

Two factors influenced thinking before the league final: the team’s remarkable ability to fend off defeat and its tendency to improve significantly at the end of the campaign.

In the end, the string of matches pulled out of the fire turned out to be stronger evidence of patchy performance rather than invincibility. It had been impressive to avoid defeat in the course of three draws and a match won in injury-time but unimpressive to have got into that situation in the first place.

“Too many unforced errors,” was Gavin’s immediate explanation after the final. “Gave the ball away too much. Certainly had enough of it. The third quarter of the game, we kicked an awful lot of the ball away.”

This was interesting because the Dublin manager had been making it clear that he wasn’t altogether happy with performance levels. A week previously, after just about seeing off Monaghan, he had fairly similar observations to make.

“The first thing to say is that we wouldn’t be happy with that performance at all. To put ourselves in that position – to be six points down with the third quarter just gone – wouldn’t be acceptable. If we play like that again we’ll have disappointing days ahead.”

While he may not have envisaged such days to be only a week away, it was clear that he wasn’t happy with how things were progressing.

He was right. The third quarter was a nightmare. Dublin were scoreless from the resumption up until the 54th minute. More disturbingly for a team that has thrived on relentlessly going for scores even if that can yield a poor conversion rate, they didn’t manage a single attempt until James McCarthy’s wide in the 51st minute.

Five times the ball was given away in the third quarter, including a misplaced free from Cian O’Sullivan, who was almost immediately replaced but in whose absence Michael Geaney almost immediately galloped through the centre for two crucial and well-taken points.

Things weren’t clicking for Dublin. Kerry’s growing confidence obviously played a role in that and at times they resembled the opposition at their best in the way they patiently held possession and took points when the gaps appeared.

The cavalry duly arrived and they can argue they should have had a penalty for Mark Griffin’s challenge on Dean Rock late in the match but as Gavin acknowledged, they had been deservedly beaten.

It felt as if Dublin weren’t fully tuned for the match. Discipline was poor in the concession of frees and they lost Diarmuid Connolly to a black card, a punishment Brian Fenton might have also picked up in the second half.

The longer-than-usual break for some senior players, combined with the earlier league final, looked to have left them undercooked compared to previous years.

But that looks like the trade-off. Last year’s league final was a high point for Dublin and progress to the All-Ireland was laboured by comparison with damaging lull periods in each of the quarter-final, semi-final and both finals.

This championship build-up will be paced differently, especially as there are injured players to be brought back, Jack McCaffrey, Cormac Costello, Jonny Cooper and John Small, and Con O’Callaghan to be integrated after the under-21 championship. Last year Paddy Andrews was the only player who lined out in the All-Ireland final who wasn’t available in the league decider five months previously.

If Kerry suffered at all from a crisis of confidence when facing Dublin in recent years, Éamonn Fitzmaurice’s team played with such a spirit and quality last Sunday that such self-doubt is unlikely to be a factor in the months ahead. The genie’s now out of the bottle. smoran@irishtimes.com