On three-year trial basis, from next summer there’ll be two provincial groups of five 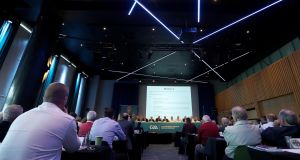 Next year’s provincial hurling championships will be played on a round-robin basis after Saturday’s GAA special congress at Croke Park voted for change.

Delegates accepted Central Council’s proposed reform of the senior hurling championship on a three-year trial basis. The decision was taken after a lengthy debate during which the four main proposals were individually presented to delegates.

Congress voted on all four with a view to selecting the two with most support to put before delegates.

In the event motion 2 from Central Council - to hold the Munster and Leinster championships on a round-robin basis - exceeded the quota with 90 votes and was put to congress, which voted by 62 per cent to accept the trial.

Had the vote taken place in the past, the proposal would have failed but the reduction of the necessary, weighted majority from two thirds to three fifths (66.7 per cent to 60 per cent).

It didn’t all go the top table’s way though, as the amendment from Laois, Meath and Offaly, to allow counties which reach the new Tier 2 final to enter the MacCarthy Cup in the same year received massive support. Only needing a simple majority as an amendment, the motion was passed 130-19 and means that there will be two additional matches.

These will be between the Tier 2 finalists and the third-placed teams in the provincial round robins with the winners going into the All-Ireland quarter-finals.

Cork’s Frank Murphy opened the proceedings with his county’s motion, which sought to introduce a round-robin format into the All-Ireland quarter-finals - as has been done in football. He argued that this would make managing club championship fixtures, of which there are to be at least 412 in Cork this year, extremely difficult.

“Our principal objective is to allow club activity from mid-April to July in between championship games,” he said.

He said that although the county had opposed the football reforms, the fact was that “they are there”. Cork’s motion sought to retain provincial championships, give equal status to hurling championship at the quarter-final stage and ensure extended participation in the championship for eight counties.

Murphy argued that a round-robin system at the provincial stage would ‘carry risks’, including poor attendance levels and the danger of dead rubbers.

Putting Tipperary’s motion, Tim Floyd drew attention to the impact on club fixtures, which his county’s proposal sought to address by proposing a similar 10-team provincial structure, but played on a knock-out/losers group basis.

“Just two per cent are inter-county players,” he said. “Hurling should be a summer game for everyone and not just county players.”

Dublin chair Seán Shanley put his county’s proposal, the re-introduction of eight-team quarter-finals as played in the middle of the last decade. He said that the Central Council proposal would have a negative impact on clubs.

Central Council’s case was put by Roscommon’s Mick Rock of the Management Committee.

“This proposal will bring more certainty to club fixtures. If it is passed there will be 24 weekends free for club activity whereas now there are only 16. You’re asked to take a leap of faith for three years, we’re not putting this permanently into our rule-book. It’s an ideal time for hurling to make this leap of faith.”

Kilkenny’s Ned Quinn sought to postpone any move on hurling championship reform. “We’re proposing that the decision be deferred until we have more time to consider the football changes and form a consensus.” GAA president Aogán Ó Fearghail however said that the debate would proceed.