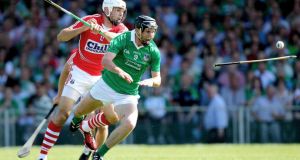 Twelve months ago this was a genuinely surprising Munster final in a momentous season by the end of which both teams had been beaten by the new All-Ireland champions Clare, another county from the province. This time around and it is in some ways again a surprise.

Limerick had to go to Thurles in the semi-final, a venue where they hadn’t beaten Tipperary for 41 years, and Cork would have to go through Clare – against whom they were one from six after last year – in the other semi-final.

Yet here they are, back again, their credentials apparently unaffected by all that’s happened since this weekend in 2013.

Despite being champions Limerick have, comparatively, the cover of darkness. The team hasn’t played since the win over Tipperary six weeks ago whereas in the meantime Cork have posted two impressive performances.

The county – rather than Jimmy Barry-Murphy’s team – has also been at the centre of all of the other issues: the imminent obsolescence of Páirc Uí Chaoimh and whether the capacity at the venue is big enough, added to actual playing matters and the injury scares for Cork in the last week.

There are good reasons to plump for either side but the view here is that the combination of home advantage, appetite after last year’s disappointments and simple improvements to the team over the season give Cork the edge

None of those criteria are foolproof: Limerick have a decent championship record in the Cork venue having in 1996 broken the unbeaten home sequence stretching back to the 1920s and repeating it in 2001.

Moreover, Barry-Murphy confessed himself during the week a little weary of the obsequies for the old wreck of a ground and the improvements for all of the encouraging evidence to date, have to be endorsed at higher levels of championship competition.

But taken as a bundle it’s enough to keep Cork going.

Despite a superior form line – Tipperary who defeated Galway last week as opposed to Clare who still haven’t got past Wexford – Limerick are available at 2 to 1, staggering odds in the circumstances for champions.

They are an interesting bunch whose reaction to beating Tipp were – once you strip out the cartoonish “no respect” agenda – serious and articulate reflections on where the team was going rather than where it had been.

Their focus had been strong enough not to bother chasing up on a team holiday because although they merited the recognition for winning Munster last year they saw the achievement as a milestone rather than a destination.

If their semi-final remained in play more because Tipperary failed to close it out, Limerick’s resolve ultimately underlined the danger of showing them an open door.

Shane Dowling’s dead-ball accuracy puts him on a par with Patrick Horgan, but by starting him and Kevin Downes Limerick don’t have the same force de frappe off the bench. David Breen’s restoration to the team, now fully fit, will challenge Cork’s half backs as well as raise the levels of industry.

In the seven weeks since they last played, their opponents have had two matches but they negotiated a similar disadvantage against a Tipp team that had to contest the league final a couple of weeks previously.

Cork will be relying on their centrefield combination of Aidan Walsh and Daniel Kearney to quarry out their share of ball against opponents whose semi-final display was outstanding. Paul Browne’s consistent delivery at this level was supplemented by the serendipitous decision to try and revive James Ryan’s form by switching him from centre forward to centrefield.

Man of the match in last year’s Munster final, Ryan came up with 23 possessions against Tipp last month, five more than the next highest performer. Centrefield suits his unfussy style – no Herculean feats, just being available and making sure someone in a better position gets the ball.

Barry-Murphy, however, was in non-stylist mode when after the defeat of Waterford in last month’s replay he primarily commended the work rate as being up where he wanted it compared to the drawn match. The middle third will be a battleground.

The belief that Cork can win is based on the ability of their forwards,

starting and on the bench, once they get a share of supply from the midfield cockpit. Patrick Horgan and Alan Cadogan have been exceptionally dangerous and if the back-up has been intermittent, the half forwards managed 10 points from play in the Waterford replay. Limerick won’t be so accommodating but if they allow Cork what they allowed Tipperary in the last 10 minutes recovery will be beyond them.

1 Gordon D’Arcy: Digging deep only recipe for Twickenham success
2 Robbie Henshaw and Bundee Aki to lead from the centre
3 Diego Simeone raises the roof with sideline spectacle
4 Jurgen Klopp: ‘welcome to Anfield, it’s not over yet’
5 Seán Moran: GAA in trouble if sectional interests not accountable to rules
Real news has value SUBSCRIBE

Manchester United fans accused of making homophobic chants 09:04
Diego Simeone raises the roof with sideline spectacle 08:28
Jurgen Klopp: ‘welcome to Anfield, it’s not over yet’ 07:55
Liverpool frustrated and beaten in first leg in Madrid; Ireland to reveal XV for England 07:30
Seán Moran: GAA in trouble if sectional interests not accountable to rules 07:00
Crossword Get access to over 6,000 interactive crosswords