Peter Keane to be named as new Kerry manager 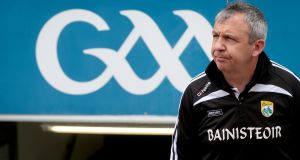 Peter Keane has been manager of the successful Kerry minor side for the last three seasons. Photograph: Oisín Keniry/Inpho

After some debate, and it seems some compromise, Peter Keane is now set to take over as Kerry senior football manager.

Keane’s name will be ratified at Monday’s county board meeting after emerging as the preferred choice of Kerry chairman Tim Murphy. Never before has the chairman’s preference being rejected, the 47 year-old Keane expected to get a two-year term to succeed Éamonn Fitzmaurice, who stepped down this summer after six seasons in charge.

Keane comes in fresh from guiding the Kerry minor football team to a fifth successive All-Ireland, in what was his third season in that role. The 47-year-old also enjoyed a successful playing career with St Mary’s in Cahersiveen, winning four county under-21 championship medals with South Kerry, and also played at minor and under-21 level for Kerry, captaining the under-21s to Munster success in 1992.

The new deal with Keane was agreed on Wednesday with Murphy and also with the selection team of secretary Peter Twiss, development officer Éamonn Whelan and coaching officer Terence Houlihan, who had given themselves a deadline of next Monday.

Keane who will pick his own management team as per the process agreed back at the August county board meeting, and is reported to be assembling a strong line-up which will include Maurice Fitzgerald, Donie Buckley and Tommy Griffin. The fourth member may or may not be an expert on strength and conditioning and could come from outside the county.

Fitzgerald, the 1997 Footballer of the Year, was among the initial candidates, having worked as a selector under Fitzmaurice for the last two seasons. But having recently taken over as principal of Coláiste na Sceilge, it became clear his workload would not allow it, but as some compromise, and to help with continuity, he may yet play some role. Griffin worked with Keane on the minor management this season, and Buckley comes with considerable credentials too, having previously worked as football coach with the county.

Another candidate was former senior manager Jack O’Connor, who went back to guide Kerry to the first two of those five minor titles, and now acts as under-20 manager, but he had indicated he was happy where he was.

Keane’s first dip into management came when he trained the St Mary’s senior side at the young age of 27. After prematurely finishing his playing career due to business commitments, he returned to the game as manager of the Beaufort senior team in 2008. After that he successfully guided St Mary’s to All-Ireland Junior success in Croke Park in 2011. He also guided St Mary’s to the South Kerry championship that year.

In 2014 he also took over the Legion senior management post and in his two years in charge Legion was promoted to Division One of the County League as well as competing in back to back senior club finals and O’Donoghue Cup finals.

1 Reality Bites – Tales from the new normal: Caitríona Cormican
2 Nicholas Quinn: ‘Swimming became how I dealt with grief’
3 James McClean still failing to learn his own online history lesson
4 Ian McKinley: ‘You do take for granted the simple things in life’
5 Greatest hits of this season’s English Premier League – and the biggest flop
Real news has value SUBSCRIBE