UCD miss out on quarter-finals despite victory over UL 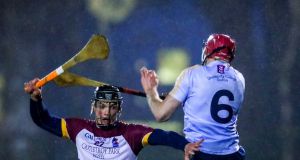 UCC overcame NUIG by 1-19 to 0-14 at The Mardyke to ensure they finished top of Group A in the 2019 Fitzgibbon Cup, with seven points from Shane Conway aiding the Cork college on their way to victory.

Tom Kingston’s side will have a home quarter-final, although NUIG also advanced to the last eight as UCD failed to defeat UL by the required margin in the group’s other game.

UCC had a dream start to the game, as Cork star Shane Kingston found the net in the early stages and it gave the home side a platform to build on, as they went on to take a comfortable 1-13 to 0-5 advantage at half-time.

They were never going to relinquish an 11-point advantage and held out for an eight- point win.

UCC possess some serious talent within their ranks and will expect to be very close to lifting the cup come the end of the campaign.

UCD defeated UL by 3-8 to 0-15 at Belfield but it was not enough to secure a place in the knockout stages, as they were required to win by 10 points or more.

UL will be bitterly disappointed with their campaign, having failed to win any of their three encounters.

DIT defeated Maynooth 4-12 to 1-9 to secure their place in the quarter-finals. The Dublin side were dominant throughout and first-half goals from Niall Walsh and Eoghan Dunne gave the victors a 2-8 to 0-6 interval advantage.

DIT pushed on in the second half and the visitors eased to a 12-point victory.

IT Carlow booked their place in the quarter-finals after a 3-16 to 1-7 over Garda College at Borrisoleigh, while CIT also advanced to the knockout stages, after they defeat WIT on a scoreline of 0-15 to 0-9.