Carlow and Westmeath hurlers get their day in the sun 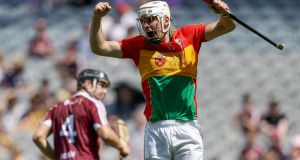 For Carlow and Westmeath, Saturday night is their free hit. Even though there’s about as much chance of their All-Ireland preliminary quarter-finals being rained off as there is of them winning, they will welcome Limerick and Wexford to their respective home grounds and sign off their summer like hurlers. If either of them get within double figures, it’ll count as a job fairly well done.

The first season of the Joe McDonagh Cup saw curtain-fall last Sunday, with Carlow the inaugural winners after a surprisingly comfortable win over Westmeath in the final ahead of the Kilkenny v Galway game. At the end of 16 games in nine different venues from Dunloy to Tralee, Carlow were deservedly crowned the best team and will play in the Leinster Championship in 2019, with Offaly going in the other direction.

As GAA experiments go, it has undoubtedly been one of the more successful ones in recent years. The standard was decent and, more importantly, pretty even across the board. Nine of the 16 games were decided by four points or less. Meath lost five from five but still managed to run Carlow to two points and Kerry to four.

“I think it has been a resounding success,” says Westmeath manager Michael Ryan. “You’ve had some very tight games, everybody has played five games and it was in the melting pot right to the end. The really good thing about it was that no team had a bye so each team had the same amount of rest. Nobody could say they were playing four weeks in a row and there was a break in the middle of it for everyone as well.

“In fairness, the GAA should take great credit overall. The format was great, we had top-class referees, the facilities were very good, the good weather helped obviously. Everything was absolutely perfect. Why they’re changing it now, I don’t know.”

If you’re looking for the rub, there it is. From 2019 onwards, the Joe McDonagh Cup will be reduced to five teams. Meath were relegated having finished bottom and now won’t be replaced by Christy Ring winners Kildare, who lost a play-off with Antrim last Saturday.

The given reason is slightly convoluted but essentially it boils down to needing to keep eight teams in both the Christy Ring and the Nicky Rackard. The latter had seven teams in it this year after the restructuring, meaning that one side of the draw only had three teams, making it easier to qualify out of. Instead of promoting an extra county from the Lory Meagher, which would have left it with only three teams, it was decided instead to take one down from the Joe McDonagh.

It’s a move that has proven pretty much universally unpopular. The Kildare and Antrim squads released a joint statement ahead of last weekend’s promotion/relegation play-off lambasting the decision to reduce the number of teams in the Joe McDonagh. Kildare’s reward for winning the Christy Ring was a six-day turnaround and a trip to Armagh to play Antrim. Even Antrim could see that they were playing with loaded dice in a game that felt unnecessary to everyone.

“The Joe McDonagh Cup should remain at six teams,” read the joint statement. “A request which is made in the interest of competitiveness, fair-play and equity. The McDonagh Cup has shown everyone how competitive hurling at the lower levels has become and the tier below the Liam McCarthy should encourage teams to achieve higher standards, not shut them out.

“This is a point which many panels have echoed throughout the year. A five-team competition is illogical and only serves to make it more difficult for aspiring counties to compete. Antrim should remain in the competition as they did not finish bottom and Kildare should fill the relegated sixth spot.”

“It was perfect the way it was,” says Ryan. “I can’t understand it. If something isn’t broke, don’t go fixing it. There were six teams in it but then they decided to relegate one team and to make the Christy Ring winners play the second last team in our group, which doesn’t make any sense whatsoever. It’s going to go back to the old scenario next year now where you will have teams on rest weeks coming up against teams that have been playing for three weeks in a row. It’s very disappointing to do it after such a brilliant first year of this format.”

That’s the thing. Everyone involved has been enthusiastic as to its merits. Carlow player Richard Coady has been playing inter-county for the guts of a decade and July 7th is certainly the latest he’s ever hurled. This will be Carlow and Westmeath’s seventh game of the summer and as a result of coming out on top, Carlow will face off against Kilkenny, Galway, Wexford and Dublin next summer. Whatever their fate when they get there, the carrot of it has been a huge driver this time around.

“It was a huge thing all through,” Coady says. “In fairness to them, the GAA got that aspect of it spot on. There needed to be another tier where you’d have a group of teams who could strive to get into the provincial championships. It was a huge incentive, firstly to get to the final in Croke Park.

“And secondly then, regardless of the result in the final, you knew you had another game in the All-Ireland championship. You knew there was another big day out. And then the big prize was making it into the Leinster Championship for next year. That was the big incentive in our camp. Obviously you want to win the competition you’re in but if you want to really progress Carlow hurling, getting into the Leinster championship is something that was needed.”

Apart from the upcoming changes – which all counties involved have said they will attempt to overturn before next year – the main bugbear has been the lack of media coverage. From not having the results read out on The Sunday Game to scant mention in most of the papers, it has gone broadly below the radar.

“It could have done with a bit more exposure, definitely,” says Coady. “I was playing in the games so maybe I’d be a bit too close to it but from talking to supporters even, the games were of a high standard. It definitely felt that way playing in them – there was no runaway fixture and no handy games. They were really entertaining and I don’t think enough people knew that.

“I think maybe because they weren’t on TV, people just presumed they were low standard games. That is something that could be changed for next year, whether they’re on TG4 or streaming or something like that. It would just give people a better idea of what these games are like.

“Even on Sunday there, if our game was a stand-alone game it might have been on TV possibly but because it was on at the same time as the Munster final, that wasn’t an option. And then you probably had Kilkenny and Galway supporters who stayed in the pubs around Croke Park watching Cork and Clare rather than coming in for the end of our game. So hopefully that can be changed for next year.”

A work in progress, then. But one that has got off to a workable start at least.