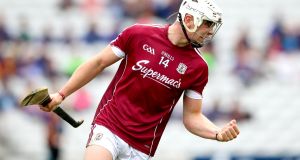 Jack Canning - nephew of Ollie and Joe - scored 1-3 as Galway dominated throughout in seeing off Clare in the All-Ireland MHC quarter-final in Páirc Uí Chaoimh on Saturday.

Canning’s goal in the 23rd minute came with the Tribesmen leading by 0-6 to 0-5, having been ahead all through, and their advantage was never less than three points thereafter.

Galway had eight scorers in all, with Conor Walsh impressing from frees while Seán Bleahane and Donal Mannion also caught the eye.

Clare endured a difficult day in front of the posts, though they looked to have found their feet when Gary Cooney pointed in the 15th and 16th minutes to bring them to within two, 0-4 to 0-2. Galway were always able to stay in front, though, and Canning netted on 23 minutes after good work by Martin McManus and Ben Moran.

Aidan McCarthy and Riain Considine replied for Clare but Canning had the last score of the half as Galway led by 1-7 to 0-7 and he extended the lead further on the resumption with a fine score from the right,

Keith White led the Clare second-half challenge but Bleahane, Walsh and Conor Fahey helped Galway to ease clear. White’s third pulled it back to five points, 1-12 to 0-10, but four in a row by Galway, with Mannion, Canning, sub Shane Ryan and Ben Moran on target, removed any doubts about the outcome.

When sub Enda Fahey got their second goal with his first touch on 54 minutes, it made it 2-17 to 0-11 and though Cooney did net for Clare late on, it was only a consolation.