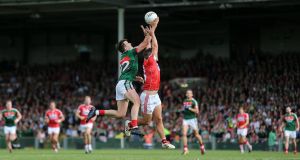 Cork’s Sean Powter in action with Jason Doherty of Mayo during All-Ireland Senior Football Championship Qualifiers Round 4A at the Gaelic Grounds, Limerick. Photograph: Cathal Noonan/Inpho

One of these days Mayo are going to run out of heart and spirit and whatever else keeps them coming back for more. Only for now just take a look at that score line.

It’s the first way of making some sense of their latest crazy championship adventure, which by turns of bravery and fragility captured everything about Mayo football of late – before setting up next Sunday’s All-Ireland quarter-final against Connacht champions Roscommon. No handshakes necessary there.

That it will be Mayo’s seventh successive quarter-final is one mark of their consistency, yet consider again the manner of it: they seem to have nurtured an appetite for adversity, insatiable when it comes to dealing with it, and just when it seemed the dream here was over for another year.

Because just when it seemed too that Cork were playing for pride after the fall of the Munster final, they lifted spirits possibly beyond their own expectations – forcing the game into extra-time despite being down double scores early in the second half.

Both teams had a hand on victory at the end of normal time and extra-time – before the old musical chairs scenario comes to mind: Cork might feel they ran out of time in another sense, referee Ciarán Branigan whistling up 20 seconds short of the allotted three minutes at the end of extra-time.

“It means we’re in the quarter-finals,” deadpanned Mayo manager Stephen Rochford, when asked what this latest epic victory means to his team. “I’m not trying to be smart with that, but that was the aim at the start. If we won it by a point in normal time we would have been happy.

“Probably a lot more relieved now because of the position we put ourselves in, and we would feel there was 20 minutes there that was unnecessary but it is what it is. It’s the Jekyll and Hyde aspect.

“But believe you me, Cork have taken a bit of a battering over the last couple of weeks and maybe not of it all fair. They’re a damn good team and damn good teams runs at you and any of them are going to cause you a problem.”

The eight-day turnaround was of obvious concern for Rochford: “Sure, having played additional time in that warm weather will ask questions of us, but at the same time we’re back where we wanted to be. There’s nobody ahead of us so far as the race, so we’ll take that on and we look forward to it. But we live to fight another day.”

It’s the game that also marks the end of Cork manager Peadar Healy’s two years in charge, who in the immediate aftermath confirmed he wouldn’t be seeking another term: he described it as a “tough” two years, and had some regrets here too, mainly the further missed goal chances and the series of game-time injuries – most crippling James Loughrey, Aidan Walsh and later Sean Powter, along with the black-carded Jamie O’Sullivan.

“Certainly a big performance from the boys, they certainly went down into the cut, and brought in out of the cut,” said the Glengarriff-based man. “But a tough two years [for me] to be honest. When you go into the business, especially the manager’s side of it, it’s brutal and championship is brutal. You’d either want to be retired or a teacher and off for the summer. You just need a lot of time for this job.”

Cork put up an incredible challenge however, Colm O’Neill’s impact off the bench just part of their surprise package, but they simply ran out of road and legs in the end – kicking two late wides which otherwise would have forced the replay.

In the 20 minutes of added time it seemed destiny couldn’t tear them apart, only for the O’Connor brothers – first Cillian, then Diarmuid – to finally open some space; Cillian finished with 0-11, four frees, plus one 45, playing a captain’s role in every sense.

Mayo were those double scores up, 0-14 to 0-7, on 46th minutes, and it seemed had both feet in the quarter-final. Then two goals from Powter and Luke Connolly – in the 71st minute – helped wipe out much that advantage.

Still it looked as if Mayo would fall over the line, Paddy Durcan sending over an excellent score with just one minute of the six minutes of added time remaining. Still time for a Cork free, Connolly coolly converting, bringing both teams back out for second helpings.

Aidan O’Shea was making his 100th appearance for Mayo, between league and championship – and as if on cue marked it with his best performance this summer, operating mostly at centre forward and finishing with 0-3.

The loss of Lee Keegan on a black card, on 58 minutes, certainly opened the scoring gates for Cork. Colm Boyle was taken off at that stage too, and without even trying too hard it seemed Cork were carving open the Mayo defence, looking as if they would score with every attacking move.

Points from Donncha O’Connor and John O’Rourke closed the gap, before Powter’s brilliantly thunder-struck goal on 55 minutes made it 1-10 to Mayo’s 17 points. That was merely the calm before the storm, which for Mayo, for now, shows no signs of abating.

And back in Croke Park, which has a history of bring out the best in Mayo: “Time will tell,” added Rochford. “The boys have turned in some of their best performances over the last number of years there, but that’s history at the same time. Next week is going to be a massive challenge. No doubt, having played that additional time in that warm weather will ask questions of us, but at the same time we’re back where we wanted to be.”

Gordon D’Arcy: Ireland don’t need to do a Finn Russell on it 06:00
Beibhinn Parsons ready to move on the next level 06:00
CJ Stander ready for Italy after lockdown sheep battles 06:00
Aki, Ringrose and Henshaw: Brian O’Driscoll has his say on Ireland’s midfield riddle 06:00
O’Neill steps into the unknown as Galway eye silverware 05:00
Crossword Get access to over 6,000 interactive crosswords