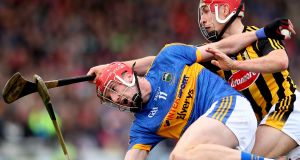 Tipperary’s Billy McCarthy and Cillian Buckley of Kilkenny in action during the 2018 Allianz Hurling League Division 1A Final at Nowlan Park in April 2018. Photograph: James Crombie/Inpho

The first sense Billy McCarthy had that doom was about him was when Mickey Cahill held his head and told him not to look down at his knee. As well as being his Thurles Sarsfields team-mate, the physio in Cahill knew two things straight away. One, McCarthy’s knee was dislocated and there had to be horrendous ligament damage. And two, the road ahead of the young Tipp star was going to be long enough without needing a picture of it rattling about in his head.

“The mad thing was, I didn’t feel any pain,” McCarthy says now, two years almost to the day since it happened. “It was only later when I was on my way to Waterford hospital that the pain really kicked in. I suppose it was a combination of shock and adrenaline but I didn’t feel pain for about 45 minutes.

“I was chatting away to lads even though the knee was on the other side of my leg. Mick Clohessy, our physio, was saying to me, ‘Thank God you’re not feeling any pain’. Because there was nothing they could do for me. They had to wait for the ambulance and when they arrived they gave me morphine.”

In July of 2018, Billy McCarthy was 21-years-old and soaring. His Tipperary debut had come three games into the league that spring and from there he had carried his bat for the rest of the year. It was the first summer of the group stage championship format and he was one of seven Tipp players to start every game. Of the outfield numbers, only Ronan and Pádraic Maher played more minutes than him.

He wasn’t a made man like them yet but he couldn’t have done a lot more with his first year. His last game for Tipp was against Clare, a schlocky, this-way-and-that afternoon in Semple that he burnished with a boy’s own goal in the first half. Clare mugged them at the death but when Tipperary people were sifting through the ashes, Billy McCarthy was the one good thing to come out of a bad, black summer.

Six weeks later, he was playing for Thurles in a Mid-Tipp semi-final against JK Brackens. He was running through on goal, tall and straight-backed and ravenous, when the tackle came in from the side just as he struck his shot. The Brackens lad was trying to get a block in but all his weight went onto the knee of McCarthy’s standing leg. Disaster.

Both cruciates – ACL and PCL – were severed. Some smaller ligaments were badly damaged too. McCarthy remembers his team-mate Conor Stakelum taking a looking at the scene and walking away with his head in his hands. The ambulance initially brought him to Clonmel Hospital but it only took one glance from the staff there for him to be sent straight to Waterford General. The pain had kicked in by this stage.

He went for surgery the following week. Dr Fiachra Rowan initially suggested two separate operations but ended up doing it all in one. Eight hours later, McCarthy came to in a different world.

“The scariest time was just after the operation,” he says. “I woke up and I couldn’t feel my leg because they had to cut off the blood supply during the operation. There was so much swelling around the knee that they had to cut off the blood to it and there was a tourniquet on it at the top of my leg. So when you mixed that it with local anaesthetic and general anaesthetic, I couldn’t feel my leg. Now, they told me to expect that but I thought it would be for a day or two. But it lasted two weeks.

“It was probably the worst feeling ever. They kept telling me, ‘Aw don’t worry about it, the feeling will come back’. But sure that’s not what’s running through your head. It was two weeks of pure worrying. I was getting my mother to tickle the bottom of my feet probably every two minutes to see was the feeling ever coming back. For two weeks solid I was getting her to do that. Her head was wrecked.

“That was very scary. I was probably panicking a bit more than I should have been and I feel a bit stupid now when I think about it. Just knowing that I couldn’t feel my leg was killing me. You have the worst thoughts. You’re already in a bad enough place knowing that your whole knee was dislocated but not having any feeling in it on top of that was torture.”

His recovery has been long and tedious, like a dull movie that keeps finding new ways not to end. He was bedbound for six weeks, in a brace for five months. At one stage, getting up to go to the toilet was a 15-minute expedition, even though it was only in the next room.

It was a miserable time. He did all the work to build his strength back up but the pay-out he got in return was miserly. Eight months passed, nine, 10 – the usual timescale for recovery kept getting extended.

“And even when I did get back running, I’d nearly be coming away crying from training,” he says. “My leg would swell up, I could barely move my knee or my leg at all the next day. I ended up hating the thought of going training, something that I used to love. I was dreading going up there because I knew coming home from it that I would nearly be in tears with the pain. I knew my knee would swell up and that I would have limited movement the next day.

“That was nearly the worst of it because you’re after getting the operation, you’re after doing all the work just to get back to do the thing you love and now, because of the pain that’s guaranteed after a training session, you’re losing interest in the whole thing. You’re going, ‘Well sure I can’t get back to where I was so why am I bothering?’

“I was nearly in denial over it too. Maybe not denial but I was just going, ‘Look, the knee will get used to it, I’ll live with it’. That went on for two or three months and it was only in my yearly check-up last summer that I went, ‘Look, I think there’s something really wrong here. I can’t run without pain’. And so when they looked at it again, we found the ACL had gone again.”

It was the best news, it was the worst news. At least now, he knew there was a reason for the pain and it could be fixed and he could see a future where there was hurling again instead of misery. But to get there, he was back on the blocks again, with months of dull, grinding work ahead of him.

“You’re still coming away from it going, ‘Right, that’s another year of tough slog ahead’. It’s mentally draining, just knowing that you have another year of that to go through. But you can’t focus on the negatives because you’ll drive yourself mad if you do that.

“I didn’t resent it because I nearly became obsessed with trying to get back hurling. My friends would tell you this – we could be walking down the road together and I could break out into a one-legged squat just to test the knee. I might start jinking just to see how it is. They’d keep talking away and take no notice of me. You become totally obsessed with getting back to where you were.

“I think that’s because when you get to intercounty level and you get exposed to a piece of that, you’re just searching for that again. You nearly get addicted to it. You want to get back so badly.”

And here he is. Not back yet, not 100 per cent of the way back. But getting there. The knee is behaving itself and the lockdown has given him more time to get it right. The planets seem to be aligning for him.

The Tipperary club championship starts with a group stage, with each team guaranteed three games. Thurles are down to play Kilruane next Saturday at three o’clock, exactly two years to the day since his injury. He won’t tempt fate and he won’t push to do more than he can. But he’s never wanted anything more.

“The main thing for me was that last year I couldn’t run without pain. If you took me back a year to this time 12 months ago and told me I’d be able to sprint and turn and run pain free, I would have laughed at you. That just seemed so far away.

“Contact is contact, I don’t worry about it at all. Contact will come. The main thing is being able to turn and twist on it. I’m able to do that so that’s a massive thing for me.

“Covid has given me more time to prepare. Definitely, I want to play this year anyway. I’m back running now and I’ve played a bit of contact in training. My knee has reacted very well to it. I definitely want to play in the club championship. Hopefully, I will.”

That’s all. Just to play in the club championship. The smallest, most basic wish in the GAA.