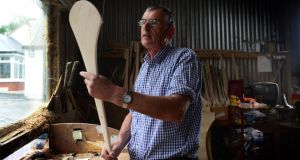 Jim O’Brien at work in his Tipperary workshop on hurleys that will be used by some of the Tipperary players in the All-Ireland final. Photo: Bryan O’Brien 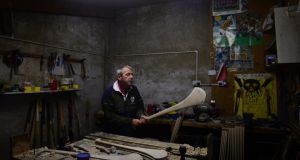 Brian Dowling at work in his Kilkenny city workshop on hurleys that will be used by some of the Kilkenny players against Tipperary in Sunday’s All Ireland Final. Photograph: Bryan O’Brien

Mark Dowling is almost furtive in the way he asks his father Brian to pass out the two freshly-fashioned hurleys that are leaning against a workbench in front of him.

A peek out the window of the workshop of Star Hurling in Kilkenny’s Patrick Street tells you why. Outside, the purchaser is immediately recognisable as having crossed enemy lines in search of munitions. Eoin Kelly, collecting a couple of new wands 10 days out from his fifth All Ireland final.

Kelly isn’t the only Tipp player who sources his hurleys here – Pádraic Maher is a customer as well. But even so, Brian Dowling’s fealty needs very little scrutiny – this converted cowhouse in the heart of James Stephens territory has been the place where Kilkenny teams have come for their hurleys for the best part of half a century.

“It came from my mother’s side of the family initially,” Brian says. “They’re Nearys in Stephen Street and they’re still making hurleys today. My dad starting working there before going out on his own in the 1960s. He worked at it for years and then I did it as well and we’ve been making hurleys for the Kilkenny team since then.

Lined up against the wall, a lifetime’s reasons why. Stick after stick, name after name. H Shefflin. E Larkin. M Fennelly. C Fennelly. R Hogan. Taggy. Dowling’s humility is such that you’re half-expecting him to go over and cover them up. This is the man who’s been making Henry Shefflin’s hurleys since he was 15 and yet that’s the last sentence you’d ever hear coming out of his mouth. It falls to us to say it for him.

Every player is different, their particulars subtly refined to their own needs.

“At times you’d feel like a tailor,” says Dowling. “It all comes down to feel for each individual. I would always say that if you lined up 1,000 hurleys and sent a player in blindfolded to look for his own, he’d find it every time. Players become so used to their own and they become so attached to the weight of it and the balance of it and how it feels in his hand.

Less than half an hour away across the border in Drangan, Co Tipperary, Jim O’Brien has a view out the back of his workshop that any estate agent worth their yakkety-yak could sell for thousands. His house is built on a height, with a vista laid out the back that stretches a good 50 miles to Mount Leinster on a clear day.

He points out Tullaroan in one direction, Graigue-Ballycallan just beyond it, the conurbation of Kilkenny city further on. “I’m looking down on the Cats,” he laughs.

O’Brien supplies a handful of the Tipperary team and has done for a couple of decades. Seamie Callanan and John O’Dwyer are clients, free-takers and marksmen who demand very definite features from him.

O’Brien was a forester in a former life and used sell ash to hurley makers before he got into the business himself. Drangan is a couple of miles out the road from Mullinahone and it was John Leahy who first came to him to get him to make hurleys for him.

Craftsmen both, O’Brien and Dowling know each other pretty well. They’ll both go to Croke Park on Sunday and neither will be moved from the quiet confidence each has in his own county’s chances. Whatever the outcome, the workmen won’t be blaming their tools anyway.