Games still on hold as GAA wait for word from Government 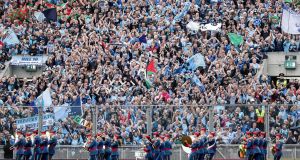 The GAA are still waiting to hear from the Government when games can resume. Photograph: Laszlo Geczo/Inpho

The GAA continue to await further engagement with the Government and Sport Ireland on a range of Covid-19 related matters, including talks on further funding assistance for 2021 and the resumption of intercounty activity, though aren’t expecting to get any concrete steer “until the turn of the month”.

The Government’s decision to withdraw the GAA’s Level 5 “elite” exemption means any return to senior intercounty match activity would be dependent on a reduction of such restrictions, or the reinstatement of that exemption: the Government has already indicated that Level 5 will remain until very low Covid-19 case numbers are sustained for up to four weeks, the earliest likely relaxation being around April 12th, or the week after Easter.

“We’re not really expecting to know anything concrete until the turn of the month, that kind of timeline, it’s been a slow burner,” said Alan Milton, GAA director of communications. “On match activity it’s known that Level 5 exemption that allowed that has removed, so that privilege that was used last winter will have to be re-instated, or else there is lowering of restrictions, before match activity can resume.

“But as soon as we’re told we can go back, rest assured it won’t take us long to mobilise, we’ve the necessary infrastructure in place from last year.”

Internally, the GAA are understood to have made the resumption of intercounty games and children’s activities the priority: GAA president Larry McCarthy made reference in the latter in his debut speech at Congress the weekend before last.

“I would respectfully ask the authorities that we be allowed to have activity for children in our clubs once schools have safely opened,” he said. “We showed last year that we can do this very safely and very effectively. Acknowledging that the circumstances are more onerous now, there is no doubt in my mind that we can do so again.

“We are a sport organisation without sport – except for our games going on in Australia. We are not deciding on matches and fixtures, nor coaching and games, nor tournaments.”

The conversation about Government funding, according to Milton, was also sure to be back on the table soon, though not an immediate priority: “Again that’s a conversation that will have to be had, only right now is not the immediate priority for the Government, in the middle of a vaccine programme, so it’s not anything that we’re pushing for at the minute. It’s been said, on the record, that we’re going to need assistance, but we haven’t gone down that road yet.”

For 2020, the GAA revenues plunged €42.5m in the worst financial year on record, the Government subvention of €18.5m being the biggest item of revenue in the accounts. In his annual report, association finance director, Ger Mulryan said that the first year of the Covid pandemic saw association business decline in some cases to almost nothing.

Central Council income at €31 million was the lowest since 2003 (€30 million), the losses mainly comprise Central Council (€15.6 million) and Croke Park stadium (€10.2 million); Mulryan said that the GAA would be “knocking on the Government’s door” to help to fund the 2021 season, adding that although the association didn’t like to be “dependent on anyone” they had needed Government subvention of €18.5 million and “were very grateful to get it”.

On the matter of crowds returning to games this year, in turn making some improvement on those zero gates, Milton pointed to some ground work already being laid; “The work would have started on that as far back as last May, with a view to last year’s championship, and still applies, as a joint body of work (with the IRFU and FAI).

With postponed Euro 2020 matches scheduled for Dublin and Uefa keen for attendances, the issue is more becoming more pressing, Peter McKenna, Croke Park stadium director, telling this newspaper last week that it made sense for the GAA, rugby and soccer to collaborate, which they did in compiling a report late last year.

“We were totally conscious that we wanted one message coming out because people go to rugby matches, GAA matches et cetera and we didn’t want a set of rules for one and not the other. We wanted a common message.”

Again, the GAA are awaiting further engagement on that matter, their Guidelines for Reopening Sports Grounds including the objective of reaching 1m Social Distancing (approximately 35 per cent capacity) at Covid-19 Levels 1 and 2 when it is appropriate to do so.”

That number is up 45 on the number of players who benefitted from these scholarships last year, an 82 per cent increase in the number of recipients; 31 of the 32 counties are represented on the list.

“These are invaluable relationships that make a real difference to the lives of inter-county players, said GPA CEO Paul Flynn.