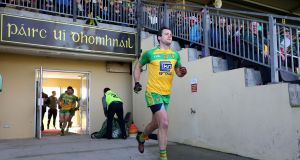 Michael Murphy leads out his team last week: After the Kerry defeat, Donegal will be eager to get off the mark against Roscommon on Sunday. Photograph: Lorcan Doherty

St Vincent’s (Dublin) v Slaughtneil (Derry), Páirc Esler, Newry, 2.0 (TG4)
The idea that Vincent’s were running a little on empty had to be revised after the Leinster final, which was the team’s sharpest performance of the campaign. The Ulster champions will be an altogether tougher proposition. They have completed a second Ulster championship title in three years and in only one of those matches have they either conceded a goal or a double-digit total. They will have learned from the chastening defeat by Corofin in the All-Ireland final of two years and won’t get stage fright in Newry. The Dublin champions, though, with their range of attacking threat, are worthy favourites. Chrissy McKaigue may well tussle effectively with Diarmuid Connolly but Tomás Quinn, Enda Varley and Gavin Burke are experienced in varying the threat. On the basis that they have the options to combat Patsy Bradley’s influence at centrefield, Vincent’s advantage up front can count. Verdict: St Vincent’s

Corofin (Galway) v Dr Crokes (Kerry), Gaelic Grounds, Limerick, 4.0
Twenty-five years ago when Colm Cooper’s club involvement was as team mascot rather than Captain Ahab after the whale, Crokes did a number on Corofin in Tuam, with current manager Pat O’Shea prominent. The club is now trying to put behind it the three semi-final defeats in successive years, as they square up to the champions of two years ago. The Galway side appear to have relocated their 2015 menace with Micheál Lundy, Gary Sice and Michael Farragher in form during the provincial run but the Killarney club have definitely added some fresh quality, as could be seen in the contributions off the bench of Micheál Burns, Jordan Kiely and Tony Brosnan, all three graduates of Kerry’s recent under-age juggernaut. The loss of Eoin Brosnan, whose experience and tactical flexibility has been important, could however be an inhibiting factor. Close but Corofin have the edge. Verdict: Corofin

Dublin v Mayo, Croke Park (eir Sport 1) –Even on a Baltic night in February, this fixture promises fire. Tyrone had hoped to get a crack at Dublin last September. This is their first real opportunity to measure themselves against the best since they reclaimed their status as the best in Ulster. Teams know what to expect from Dublin but still, from Stephen Cluxton’s kick-outs to Brian Fenton’s high fielding to the unbreakable composure with which they are playing the game, preventing them from doing it has been beyond the ability of the best in the country. Worst of all for would-be contenders, the established players are fighting to prove themselves this spring:  the inclusion of Niall Scully, one of the conspicuous successes of the January competition, is a reminder from Jim Gavin that the past means nothing. Verdict: Dublin
- Keith Duggan

Kerry v Mayo, Stack Park, Tralee (eir Sport 2HD)  – Two of football’s big three, albeit at an embryonic time of year: Mayo would have hoped not to be coming south in search of their first points but the listless display against Monaghan makes that the task. There is a question however of the teams’ respective depths. Kerry trialled some of their emerging players in a good win in Donegal but could fall back on experience as well with Paul Geaney in good form whereas Mayo, fielding only half the All-Ireland team, struggled to contain Monaghan although newcomer Donie Newcombe played well. It’s hard not to see the respective trajectories not being maintained. Verdict: Kerry

Waterford v Wicklow, Carriganore – Jonny Magee’s role as the Job of inter-county management intensified with a 10-point home defeat by Leitrim. Waterford started well against London and can pick up further momentum this evening. Verdict: Waterford

Monaghan v Cavan, Castleblayney – Cavan had an exciting introduction to Division One with a huge crowd and the All-Ireland champions at home. There was some encouragement in a spirited display and respectable defeat but the pressure starts here against neighbouring rivals Monaghan, who scrapped impressively to win in Castlebar. Seán Johnston was the pick of the Cavan forwards but against Mayo Conor McManus gave further evidence to support claims that he is the best forward in the game. The visitors bring a relatively young team, eager to develop this season but Monaghan are seasoned top-flight campaigners and can exploit home advantage. Verdict: Monaghan

Roscommon v Donegal, Dr Hyde Park, 2.30 (deferred TG4) – This fixture was one of Roscommon’s stand-out displays last year when winning in Letterkenny but things have changed a bit since then. Still Roscommon get to open their refurbished ground and can take some encouragement from the trip to Omagh although the news that Ultan Harney is injured again after a Sigerson match is dispiriting for a team already not at full strength. Donegal, stacked with newcomers and liberated from the sweeper system just to see what would happen, finished respectably against Kerry and as manager Rory Gallagher said, 1-17 would win most matches. It also again showcased the need to clone Michael Murphy, who was required to shore up centrefield having started at full forward. The visitors to spoil the big day at The Hyde. Verdict: Donegal

Clare v Down, Cusack Park – Separated by two divisions last season, times have changed for both counties. Down’s freefall continued last week whereas Clare gave a gutsy display in Derry to earn a draw and were unlucky not to win. They’ll have Gary Brennan’s undivided attention this weekend and against a side as out of ideas – and players – as the visitors looked losing at home to Fermanagh, they can keep the unbeaten run going. Verdict: Clare

Fermanagh v Galway, Brewster Park – Galway just about survived against Cork but Barry McHugh’s free taking and glimpses of promise from Michael Daly were heartening. The county has lolled around this division for too long but can’t afford complacency against a coherent Fermanagh team who last season held them to a draw in Salthill. Tomás Corrigan’s dead-ball marksmanship and an impressive spread of scorers gave Peter McGrath’s team a sound win in Newry and they won’t be easily beaten here. Verdict: Fermanagh

Kildare v Cork, Newbridge – Kildare perked up last week with a convincing display in Navan and have a chance to inflict some damage on Cork’s promotion hopes. It was hard to tell as Meath were so anonymous but Kildare’s forwards were slick and assured. If they keep that up, this will be interesting and the visitor’s lack of economy, as displayed in Galway could again be costly. Verdict: Cork

Meath v Derry, Páirc Tailteann, 3.0 – Two fairly unhappy results at home last week but at least Derry were relieved to salvage something whereas Meath were annihilated. Gloom deepened for Derry with the news that Mark Lynch will be missing for a number of weeks. Meath desperately need to kick-start something after a couple of bad results. That process can begin here with a backlash against last week’s ineptitude although Graham Reilly will hardly feature with his club in an All-Ireland final next week. Verdict: Meath

Louth v Longford, Drogheda – Louth got off to a good start, putting to use the lessons of the O’Byrne Cup defeat by Dublin and tightening their finishing. Pauric Smith and Ryan Burns were at the forefront of a productive attacking display. Longford too had a decent win in their never-ending rivalry with Offaly but Louth can take home the improved form. Verdict: Louth

Tipperary v Sligo, Semple Stadium – Sligo’s late recovery against Armagh sets them up nicely for this trip to Tipp. The home side also started poorly in their opening match but overhauled Antrim and have the firepower between Conor Sweeney, All Star Michael Quinlivan and Philip Austin to win again. Verdict: Tipperary

Offaly v Antrim, O’Connor Park, 3.0 – Offaly were desperately disappointing when losing their first outing in Longford but will be fancied to make amends here despite glimpses of Antrim looking threatening against Tipperary. Verdict: Offaly

Carlow v London, Netwatch Cullen Park, 1.0 – Carlow snatched a fine draw in Westmeath last week and should be able to translate that into a win here. Verdict: Carlow

Limerick v Westmeath, Gaelic Grounds – The two relegated teams from last season and neither won on the opening weekend. Westmeath’s win in Limerick last year was probably their best display of the campaign and they’ll want a repeat to get the promotion bus moving. Verdict: Westmeath