Allianz Hurling League: round one previews 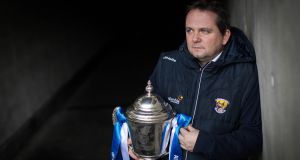 Dublin v Tipperary, Croke Park, 5.0 eEir Sport 1, 4.30). Referee: Paud Dwyer (Carlow) – If you were go in search of a straw to grasp for Dublin here, you could emphasise the fact that Tipperary haven’t beaten them in the city for over a decade. Their record in the capital since 2007 is played four, lost three, drawn one. And, well, that’s about it. Pickings get fairly slim after that.

With no Cuala representatives, Ger Cunningham has to field a young side against the All-Ireland champions and at a time when the air looks to have gone completely out of the Dublin hurling scene. They won’t have injury victims Eamon Dillon, Chris Bennett or Cian Boland here either, although Dillon should be back for Cork next week. Having not pucked a ball in anger yet in 2017, it’s hard to predict what shape Tipp will be in. They will surely have plenty in hand all the same, whatever they bring up the road with them.

Cork v Clare, Páirc Uí Rinn, 7.0 (eir Sport 2, 6.45). Referee: John Keenan (Wicklow) – Under previous management, we might have smelt a potential MacGuffin in the inclusion of Tony Kelly at midfield for Clare and cocked a sceptical eyebrow as to whether or not he’d actually play. But it would seem a strange ruse to concoct, especially for new men in the job, so we’ll take it as we find it for the minute. With Podge Collins, John Conlon, Shane O’Donnell and David Reidy all named in the Clare attack, we can expect the Cork defence to have to keep track of fairly constant movement.

As for Cork, they will surely show some improvement on last year’s league whitewash. Alan Cadogan, Patrick Horgan and Conor Lehane all came to the fore in the pre-season Munster league and big things are hoped for from Shane Kingston. But you’d have to fancy the league champions to be the superior force in this one.

Kilkenny v Waterford, Nowlan Park, 2.0 (TG4, 1.30). Referee: Fergal Horgan (Tipperary) – As if the landgrab business around the border of Waterford and south Kilkenny wasn’t bad enough, there’s hurling to be done. Mind you, when there’s talk of annexing, of politically-motivated coups, and even suggestions of fighting on the streets, it might be nice to take a break and see what happens when ash and leather start flying.

There’s every chance this could be a belter of a game. No shortage of motivation on either side and not too many significant absentees either. Brian Cody has played many more of his first string in winning the Walsh Cup than Derek McGrath did in filling fixtures in the Munster equivalent. But then again, weird though it feels to say it, Cody is badly in need of his first string to bring the rest of his charges along. McGrath knows what he has at his disposal, Cody is finding out. It would do Waterford no harm at all to put a bit of hurt on Kilkenny on their home patch. Expect them to act accordingly.

Wexford v Limerick, Innovate Wexford Park, 2.0.Referee: Diarmuid Kirwan (Offaly) – A promotion six-pointer right off the bat, this one. With Galway lurking, neither side can afford a defeat. Limerick’s injury crisis has come along at just the wrong time, with Shane Dowling, Kevin Downes, Tom Condon and Gavin O’Mahony all sidelined. Wexford will wait on Conor McDonald who is close to recovery from illness but at home and with local tails up, this ought to be theirs for the taking.

Offaly v Galway, O’Connor Park, 1.0. Referee: Colm Lyons (Cork) – Galway could do with getting into the habit of ending these games quickly as the league progresses. They won’t have Joe Canning for a month or so but Jason Flynn and Joseph Cooney look to be in reasonable touch. Kevin Ryan starts life on the Offaly sideline without Joe Bergin. Verdict: Galway

Kerry v Laois, Austin Stack Park, 2.0. Referee: Johnny Murphy (Limerick) – Kerry beat Laois twice in last year’s league, the first time by seven points, the second by 11. And even though new manager Fintan O’Connor is only in situ since Christmas week, they can extend that run here. These sides will most likely meet again in the relegation play-off so this could be a feeling-out affair.