Dublin v Tyrone – five blasts from the past 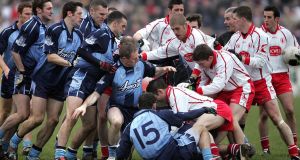 Dublin and Tyrone players come to blows during the infamous ‘Battle of Omagh’ in 2006. Photograph: Morgan Treacy/Inpho 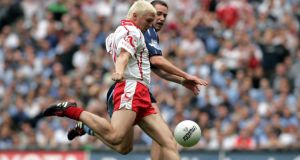 Owen Mulligan’s goal – considered one of the finest to ever grace HQ – in the drawn 2005 All-Ireland quarter-final match was symbolic of all that was great about that Tyrone team. Photograph: Tom Honan/Inpho

Over two decades ago and still the subject of historical debate, it was a final where Dublin contentiously came out the right side of a narrow win. It was an age when a young teenager called Jason Sherlock brought glitz and glamour to football but, on this occasion, the focus was on Charlie Redmond who scored the only goal of the match but was later sent-off by referee Paddy Russell. Then it got interesting, as Redmond remained on the pitch (in breach of the official guide) and had to be dismissed a second time when the referee became aware of his continued presence. Peter Canavan scored 11 points for the Ulster team but it was another incident late on that became critical when Canavan was penalised for touching the ball on the ground – in feeding Seán McLoughlin for a “point”that wasn’t allowed to stand – which deprived Tyrone of a draw.

Not one but two matches actually, and Owen Mulligan’s goal – considered one of the finest to ever grace HQ – in the drawn match was symbolic of all that was great about that Tyrone team. Dublin were five points up and seemingly on track for progress in the championship when Mulligan, his hair bleached for extra effect, dummied and ghosted his way past three Dublin defenders before rifling home his wonder goal. In the end, it took a late Tomás Quinn point to force a replay for the Dubs. A week later, though, Tyrone made no mistake and ran out comfortable winners (2-18 to 1-14) in negotiating another hurdle en route to a second Sam Maguire win in three years.

An infamous affair which became known as the “Battle of Omagh”, the bad blood from the previous autumn was carried into the following year’s spring encounter at Healy Park for the start of the National League. A skirmish just four minutes into the game laid the template for what would follow, with two all-out melees that involved multiple players from both teams. In all, four players – Dublin’s Alan Brogan and Denis Bastick and Tyrone’s Colin Holmes and Stephen O’Neill – were dismissed in the match and referee Paddy Russell confessed he found the atmosphere so “frightening” he’d considered abandoning the match. Dublin manager Paul Caffrey brought his substitutes out of their seats in the stands to pitchside for safekeeping. Tyrone manager Mickey Harte would later remark: “If Paddy Russell had been God almighty he couldn’t have refereed the game today.”

An historic encounter if only for the fact that this opening match of Division One that year was the first to be played under floodlights at Croke Park, with a sell-out crowd of 81,678 attending an occasion which also featured the Dublin Gospel Choir and the Saw Doctors. “To be honest, it was probably better than an All-Ireland final,” claimed Tyrone’s Seán Cavanagh of the razzmatazz. It was a game which marked out a teenaged Diarmuid Connolly as a player for the future but it was a night for Tyrone to remember more than the Dubs, as the Ulstermen responded to a five-point deficit at the interval with a much improved second-half display that yielded victory. An old tormentor of Dublin’s in Owen Mulligan sealed the deal with a late free for Tyrone.

An April afternoon that brought rare league silverware Dublin’s way. It was an omen of things to come, as it proved to be the first of four consecutive Division One titles – 2013 to 2016 – under Jim Gavin’s managerial reign in what has evolved into an era of dominance. The narrow victory gave Dublin a first league title since 1993 with no fewer than nine different players getting their names on the scoresheet. Tyrone lost Stephen O’Neill to a freak ankle injury sustained in the pre-match warm-up, and goalkeeper Niall Morgan – who slotted five points – proved to be the Ulster team’s top scorer. Morgan’s dead ball accuracy wasn’t enough, though, as Dublin – with Bernard Brogan contributing five points – eventually got the better of their Ulster rivals.