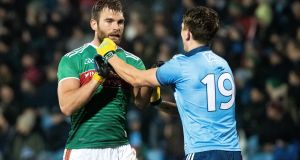 There has to be the odd dud episode in this riveting series. So Mayo’s quest for a win over Dublin now dates back to 2012, when James Horan’s team tore the All-Ireland champions asunder in Croke Park.

That was then. Dublin are made of tougher materials. They were ordinary here but it was a night for ordinariness and effort and, through it all, they had a little more slickness.

Referee Barry Cassidy was loudly jeered at the full whistle by the aggrieved locals in the crowd of 15,148, deeply unhappy with his efforts to police a game that spat with a kind of low-grade antagonism from the moment Mayo lost Jordan Flynn early in the first half.

Gradually, their momentum stalled and they slipped into a second-half scoring funk. After Dean Rock concocted a goal from nothing in the 45th minute, Mayo suddenly found themselves in an impossible position: trailing by 1-7 to 0-5 and a man down on a heavy night. Horan didn’t have a clear view of the sending-off but said afterwards that people had told him it was a harsh call.

“It is very tough . . . you could see it with 15 minutes to go, the legs were tired and they were starting to run at us a bit. It is a tough evening to lose a man that early, for sure. Our shape didn’t really change that much. In the second half, when they started to get a run on us, they could see there was something there for them, so the shape goes then because you have to chase your man. And there were very few in our attacking half. Then we got up there and missed a couple of crucial frees, which were the killer.”

It was five apiece at half-time – if the radio voices were describing it as delicately poised, then it was only delicate aspect of the entire evening. That half revolved around that red card issued to Flynn in the 14th minute. The Crossmolina man met Dublin’s John Small, who was advancing at a rate of knots and made a hash of timing his tackle. There was no malice but he caught the Dublin defender too high and left himself at the referee’s discretion.

Cassidy, possibly sensing the heightening tension and wildness creeping into the moist night, decided on the sternest measure. This, of course, only increased the tension and made Cassidy public enemy number one. Mayo now had a cause and a task that had suddenly become dramatically difficult. So they went into a 0-5 to 0-2 lead before giving up two easy frees to Dublin.

As it turned out, Small was the albatross of Mayo’s evening. In addition to the red card moment, he broke forward to score a point and won a free – which Rock scored – with another direct run that resulted in Colm Boyle hobbling off with a damaged knee. Small was one of several seasoned performers who showed the way here, and Dessie Farrell was pleased with how his team found their way through a tense evening. It finished on a familiar note, with Ciarán Kilkenny running the show in that inexhaustible way of his.

“The atmosphere was great out there and it was great for some of our younger players to experience that and perform reasonably well,” said Farrell. “It was just to come with more intensity, that is what we were going after. We struggled with the energy in the first half and improved well in the second half.”

But there was a retro look to Dublin here, and it was the multi-decorated lads who shone. Kevin McManamon rolled back the clock, James McCarthy glided over the heavy field and pitched in a nonchalant 0-2 and Rock made the key difference on the board.

Aidan O’Shea was a late inclusion to Mayo’s starting team and from the outset he seemed in a mood to right every wrong and slight that had been visited on his county. He opened the scoring in the first minute. He spent a lot of his evening bullocking through the unfashionable quarters of MacHale Park and coming away with a wealth of ball.

The Breaffy man in this form is always good crack, and the home crowd falls into immediate symphony with his surges and rampages. At one stage, Horan returned him to his former posting as conventional full forward and, immediately, the Dublin full-back line sat up to attention. At the other end of the field, young Oisin Mullin had an assured hour in the fullback line.

Beforehand, the visiting fans hung a banner over the Mitchels’ clubhouse hailing “Jim Gavin’s mighty Dubs”. It was an impudent move and an appropriate reminder that the Dubs own the land just now. The manager may have departed but the old hallmarks – the composure, the patience, the dogged work rate – were all in evidence on a squally night in the west.

It was easy in the end for Dublin, who worked 14-man Mayo to the bone throughout the second half after gaining a crucial advantage from Dean Rock’s 45th-minute goal. It was a moment of classy improvisation from the Ballymun man, who sprinted to meet McManamon’s crossed ball and just flicked it past Rob Hennelly from an acute angle.

A kind of inevitability hung over the night afterwards: it was just too early in the year for Mayo to summon that Rorke’s Drift mindset of theirs. But there was something uncompromising about their attitude: a hint of what is to come.

“That game, we started well, we were tackling well, we were doing well. We ran out of juice,” reflected Horan. “Who knows . . . we may have been beaten if we had 15 men. But you never know. A lot of the things we would have been looking for tonight, we had there. We will move on quickly.”