Local historians busy as GAA prepares for year of centenaries 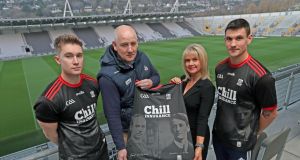 In what promises to be a busy year of commemoration for the GAA, local projects are in the news with Cork GAA on Thursday night launching the commemorative jerseys to mark the centenary of the deaths of Terence McSwiney and Tomás Mac Curtain.

Both served as lord mayor of Cork and died in the War of Independence, the former on hunger strike in London after being arrested and the latter assassinated by the security forces.

“They didn’t have particularly strong GAA connections,” explained county chair Tracey Kennedy, “and it was more about commemorating Cork-related events. It seemed like a good time to produce something historical in this decade of centenaries.

“The jerseys will be worn once by the hurlers, this Sunday against Limerick, and once by the footballers on Sunday week against Derry. For Cork 1920 was a particularly eventful year in the War of Independence with the deaths of two lords mayor, the burning of Cork and the Kilmichael ambush.

“In 2016 we marked the centenary of the Easter Rising with a replica jersey of what the Cork team would have worn in 1916.”

She added that the county executive would be working with UCC and others on a programme of commemorative events for this year.

Cork and jerseys will also be involved on Saturday – tangentially – when Tipperary GAA will announce details of its programme of commemorative events in Thurles before the football league match between the counties.

This year marks the centenary of Bloody Sunday when 14 people died in Croke Park at a Dublin-Tipperary football challenge – including Tipp player Michael Hogan after whom the stand in the stadium is named.

The GAA are planning a national event on the centenary, which coincides with this year’s International Rules test at Croke Park next November and a challenge match between Dublin and Tipperary will be played.

Chairing the commemorative committee is former Tipperary football manager Séamus McCarthy. It is expected that an initiative in respect of the county’s jerseys that day will be announced.

“The jersey worn on the day was not the Fethard jersey despite their being the county champions and providing the captain,” according to McCarthy. “The jersey used was ironically Grangemockler, Mick Hogan’s club – the white jersey with the green stripe across the middle. It’s not clear why that happened but that was the jersey that went down in history, the one that Mick Hogan was buried in – although not his own.”

He also said that the committee intend to conduct its own graves’ project by laying a wreath at the resting place of all Tipperary players from the day. The GAA has conducted its own project to mark and refurbish the graves of victims in recent years.

“The GAA have been completing a project to commemorate the 14 who died. In Tipperary, we thought that it would be a good idea to commemorate the young people who were playing on the day of the attack but who lived on. We have located all of the graves and will be conducting a wreath-laying during the summer in conjunction with the clubs of the players.”

There will also be a series of three lectures, starting shortly on 2nd March with local historian John Flannery speaking in Nenagh.

In April, UCD academic Paul Rouse will give a talk in Thurles and next October, Michael Foley, author of the acclaimed account of Bloody Sunday, ‘The Bloodied Field’ will speak in Fethard, home of Ned O’Shea, who captained Tipperary on the day.

A stage performance of the specially commissioned drama An Dúshlán (The Challenge) will take place in Brú Ború, the cultural centre in Cashel, in conjunction with Comhaltas Ceoltóirí.