Seán Moran: Will time be on Dublin’s side once more?

When you’re going for a historic five-in-a-row, time can be your enemy or friend 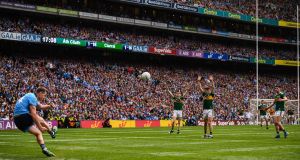 Time is such an opaque concept. We grasp what is known as the Newtonian theory that time moves steadily along and independent of any perceptions. So, it may feel like it stands stand still for you in particularly tense moments, but for everyone else it ticks along regardless.

Other ideas of time are interwoven into physics and quantum mechanics, creating a market for scientists who write well enough to make the subject matter (in theory) accessible to others. It’s unlikely the GAA would feature in the index to many of those books.

Time and its passing, however, preoccupies us in so much of what is happening in the week of this All-Ireland replay.

All sports encourage nostalgia, which in one way is simply a futile attempt to rewind something which can only go forward. Yet the whole tradition of Dublin and Kerry is a continuum; time goes forward and as a by-product creates new layers of tradition, but it equally comes from somewhere.

John O’Keeffe, in conversation about his 50-year career in football, could pick out the moments when he interacted with unfolding history in becoming one of Kerry’s most successful and influential football people, but he equally saw it as part of the flow that connects past to future.

“We’re lucky to have the tradition we have,” he said, “and the culture and interest is as good as ever. I’d have no fear of football in Kerry.”

Dublin can measure their exploits in time. Two years ago was the county’s first three-in-a-row since the 1920s. This was followed by their first-ever four-in-a-row, emulating Kerry of the 1980s and 1930s as well as Wexford of exactly a century ago.

They have come closer than any other team to achieving the immortality of five-in-a-row. We know this by reference to time and how long they have maintained the quest.

Wexford fell at the provincial semi-final stage in 1919. Kerry got as far as the All-Ireland semi-final in 1933 and the famous 1982 final. Dublin have now taken it to a replayed final and should they, like the others, be unable to create history, they will at least have established a new benchmark.

In the field of historical comparisons, it’s interesting to speculate that Dublin might have been thwarted the week before last but for time.

If referee David Gough had played as little injury-time as his predecessor PJ McGrath in the 1982 final, Dean Rock would never have had the opportunity to equalise in the 74th minute. McGrath added just 35 seconds of additional time and this was not simply because there were fewer stoppages – it was common practice.

Randomly chosen finals – at five-year intervals – in the decades that followed indicate that as little as nine seconds in 1990 and 40 seconds in 2000 (drawn match) were added on for injury-time in those football All-Irelands.

Since 2015, things have changed. The whole area of time was reviewed and, in response to rising concern about gamesmanship, a new set of guidelines was issued to referees.

One of the main sources of disquiet was the use of strategic substitutions to run down the clock. It was accordingly decided that 20 seconds should be added for every replacement brought on during a match. It’s why there is apparently more time in the second half of matches than in the first: it’s when the bulk of the substitutions are made.

Other practices to come under scrutiny were goalkeepers coming up the field for free kicks and pauses for Hawk-Eye determinations.

All told, an average of the matches looked at gives injury-time of just under two minutes, whereas the average for the past five finals is six minutes 40 seconds.

Another issue touched on by John O’Keeffe in his interview was the strange decision to extend senior championship provincial finals, All-Ireland semi-finals and finals to 80 minutes – which was an extra third on the previous duration of an hour.

Curiously, it made little difference to the outcome of matches. Of the five finals plus 1972 replay played over 80 minutes – the length of a match was settled at 70 minutes from 1975 onwards – only the 1971 Offaly-Galway result would have been affected. Had it been played over an hour, it would have ended in a draw instead of Offaly’s first All-Ireland triumph.

Time played a memorable role in reactions to Dublin’s 1995 All-Ireland victory. Charlie Redmond was sent off eight minutes into the second half against Tyrone, but didn’t leave the field until referee Paddy Russell collared him after noticing he was still there.

The controversy showed the elasticity of time when subjectively assessed. It started off as two minutes in the recollection of Tyrone manager Art McRory and before long was being casually referred to as four or five minutes.

Watched on YouTube, the forbidden period on the field comes in at 28 seconds – admittedly that’s nearly half a minute more than ideal, but not nearly the length of time some had thought, and during which Redmond never touched the ball.

Gifted players are often said to appear as if they have more time on the ball than others, but only the great get to demand it.

In the Croke Park Museum the current exhibition Tuning In – from Wireless to Wifi celebrates the broadcasting of Gaelic games. One of the most famous of these took place when Michael O’Hehir, commentating live from the Polo Grounds in New York, realised that because of delays the radio link, which was booked until five o’clock, would go down five minutes before the Cavan-Kerry All-Ireland final ended.

“If there’s anybody along the way there listening in, just give us five minutes more, and I kept begging for five minutes more,” O’Hehir recalled in a later interview. Whether he was heard or not, the link remained open.

That was 72 years ago and the only other football final until this year played on September 14th.

Will Kerry end up losing another famous final or will Dublin be desperately looking for additional minutes at the final whistle?

1 Tipping Point: Eddie Jones’s rhetoric is out of place in a febrile political climate
2 Rory McIlroy heads for Mexico with ‘WGC slam’ in sight
3 Jürgen Klopp wants Liverpool to show they are contenders
4 Maguire and Martial head Manchester United past Chelsea
5 Robin McBryde: Farrell will be judged on results, not style
Real news has value SUBSCRIBE