Rory Kavanagh hoping he has timed his return to perfection 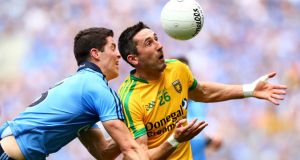 Rory Kavanagh of Donegal in action against Dublin’s Rory O’Carroll in their All-Ireland SFC semi-final. Kavanagh kicked a big point during his side’s recovery late in the first half. Photograph: James Crombie/Inpho

Rory Kavanagh’s excellent league campaign ended frustratingly. The Division Two final brought Donegal back to Croke Park for the first time since Mayo knocked them out of the 2013 All-Ireland championship in merciless fashion. That April match against Monaghan was still up for grabs when Kavanagh drew a straight red card for a moment of uncharacteristic foolishness.

To make matters worse, he picked up a minor injury which refused to clear ahead of the championship opener against Derry. Darach O’Connor was named as a replacement minutes before throw in at Celtic Park and, amusingly, the diminutive forward took his place at midfield in the parade.

But for Kavanagh, that day marked the beginning of an All-Ireland summer which has been about patiently recovering full fitness and inching back into contention. Jim McGuinness and the management held him and held him and by the All-Ireland semi-final, he was ready to go.

“I’m back now to full fitness and that is the main thing and pushing hard now for the place again. It was hard. The talk about Donegal is that we only have 17 or 18 players but that’s been pushed out to maybe 20 players. The boys who came in did very well and it was very hard for Jim to overlook them again for the next round of the championship. It’s been a push to try and get back into the team.”

The emergence of Odhrán Mac Niallais and the robust showing by Martin McElhinney in the Ulster campaign has deepened the Donegal midfield options. It is an area with which Donegal constantly tinker. Michael Murphy drops in there at times, Christy Toye can fill a role when required and Kavanagh has played most of his career there for Donegal but was named at right half forward for the Dublin match.

The Donegal team were staying in the capital on the eve of that match and the Kerry-Mayo replay happened to coincide with their free time. They decided that it was a good way to kill a few hours. “We had our meeting afterwards and got refocused.”

But the strength of the Kerry midfield left a big impression on Kavanagh and like the others, he began to absorb the pressure points which were hurting Mayo.

Like the rest of the country, the Donegal players became caught up by the wild theatre of that replay in Limerick and Kavanagh was struck by the calmness of Eamonn Fitzmaurice in a charged atmosphere.

“He’s a shrewd operator. Tactically, he can mix it up too if he wants to. I’m sure he will have a few surprises in store for us . . . He’s a very good manager, very good tactically. You saw with the decision to drop Marc Ó Sé that he is not afraid to make big calls either and it worked out a treat.”

Kavanagh had his own big call to make last autumn. After Donegal’s dispiriting All-Ireland title defence, he was uncertain of whether he would commit to another year. He spoke with family and friends and heard the encouragement that he needed.

“We got together and we made our plans for the year and the general consensus was we didn’t want to end it like what happened against Mayo and that was a big, big factor. We wanted to show a bit of character and show what we were about. That was important to us. That was a big factor in coming back.”

But Kavanagh shrugged it off and stepped up to kick a big point during Donegal’s recovery late in the half. It was a mark of experience earned over many seasons, some of those bitterly disappointing.

During Donegal’s All-Ireland winning run in 2012, the day they played Kerry in the quarter-final was hugely significant.

He is conscious that, despite the glaring absence of Colm Cooper and the departure of Tomás Ó Sé and Paul Galvin, this year’s final will mark a renewal of acquaintances.

“They won’t fear us and you just have to go in and perform on the day. Whoever makes the least mistakes and dominates will come out on top. Playing Kerry on All-Ireland final day – it doesn’t get much better than that.”