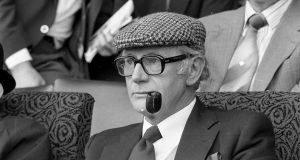 The Dublin football team may be looking to extend their own piece of championship history by winning a sixth successive All-Ireland football title, never done before in either football or hurling.

Lynch also captured a sixth Munster hurling medal in 1947, before going on to play in his seventh All-Ireland hurling final in less than a decade; in that game against Kilkenny, often described as the greatest All-Ireland final ever played, Lynch ended up on the losing side by a single point, the seven in a row there proving elusive.

Now, 15 Dublin players have the chance to equal this feat (including appearances as replacements).

Limerick’s second All-Ireland in three years is a good starting point for a TG4’s hurling documentary Reabhlóid GAA (GAA Revolution), which screens on Wednesday at 9.30.

The new champions’ achievement is the first time a team from outside the traditional top three counties has won two All-Irelands since the 1990s.

“In March and April when all matches were off we felt it was important to keep production companies engaged and in fairness to Loosehorse, they came to us with the proposal,” according to TG4 head of sport Rónán Ó Coisdealbha.

The idea was that the company, which in a previous incarnation produced Breaking Ball, the GAA magazine programme from the 1990s and 2000s, and a number of other similar series, would use their extensive archive of interviews to look back at the era, which became known as hurling’s Revolution Years after the definitive book on the subject by Denis Walsh.

For over a century, the hurling spoils had been shared among the traditional big three superpowers of Cork, Kilkenny and Tipperary. As the decade began, there was no sign of the aristocracy being overthrown.

In the middle of the decade three of the non-top-table counties, Offaly, Clare and Wexford, reeled off five All-Ireland wins between them. On the night that Clare had relieved his Offaly team of the All-Ireland in 1995, Johnny Pilkington visited the winners’ hotel and, referring to hurling’s big three counties, urged Clare to “keep the bastards down”.

News that eir are to equip Croke Park with 5G, which will be a boon for supporters whenever they get back into the stadium, is the GAA’s latest step along the path of technological progress.

Back in 1912, the news of Kilkenny’s 2-1 to 1-3 win in the All-Ireland hurling final was received in Kilkenny by telegram “through the kindness of the ‘Kilkenny People’”.

When telegram arrived shortly after five o’clock, according to the account in the People “its contents were immediately announced to the impatient throng. The news of victory was received with prolonged cheering. From the coming of the welcome news, preparations were begun for the reception of the All-Ireland champions and the streets were gaily illuminated and tar barrels burned at every corner in the city”.

The draws were in the 2015 All-Ireland semi-final, the following year’s All-Ireland final and the 2014 League.

Saturday will be the fourth All-Ireland final meeting in eight years and as a pairing it has only been surpassed by Dublin’s great 1970s rivalry with Kerry which produced four finals in five years, 1975, ‘76, ‘78 and ‘79.

0: The amount of goals Dublin have conceded in the four games that have taken them into a sixth successive All-Ireland final, seeking another record of a sixth All-Ireland; their 1-24 and 15-point semi-final win over Cavan brings to 6-90 their score in those four games, and winning those four matches by a combined total of 69 points.

“You would have expected with the way the games are coming at you thick and fast that we’d be picking up some injuries along the way, particularly at the latter stage of the competition, that we would have some casualties. but we don’t thankfully, touch wood,” – Dublin manager Dessie Farrell on the absence of injury in his panel, despite fears the pandemic winter might take an added toll.