Doolin delighted to see Hutchinson shooting the lights out with Waterford 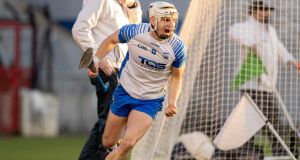 Paul Doolin was driving around a couple of Saturdays ago, listening to sport on the radio and reports from the All-Ireland hurling quarter-final in Cork. His ears pricked up at the mention of Dessie Hutchinson’s two goals for Waterford against Clare.

“‘That guy they’re talking about was in one of the squads,’ I said to my father,” he told The Irish Times.

One of the most experienced coaches in Irish soccer – and Philips Sports Manager of the Year in 2007 after leading Drogheda United to a first league title – Doolin had called Hutchinson up in 2014 when in charge of the Ireland under-19s.

He was intrigued to hear how his former charge had struck out in a different sporting direction and on Sunday, the player faces into his first senior All-Ireland final in his rookie intercounty season as a proven goal scorer and likely to be shortlisted for an All Star.

Hutchinson’s soccer background is well known at this stage. As a teenager he won an All-Ireland schools junior medal with De La Salle in Waterford after another big hurling name, future All Star Maurice Shanahan, had scored two goals in the final.

His move cross-channel to Brighton, he has freely acknowledged in interviews, promised more than it delivered and he made the big decision to come home after bad luck with injuries and despite at times encouraging progress.

He also developed a reputation for leadership that saw him captain the club under-23s and mentor among others current international Aaron Connolly.

“It’s completely different to what people think it is,” he said in 2019. “The first six months are great. You think, ‘I’m going to earn loads of money, have the best of everything. I’m going to work really hard’. But things just don’t happen like that.”

Doolin was impressed with the young Hutchinson and agrees that fortune didn’t favour his soccer career. He picked him first for a pair of friendlies against Sweden in October six years ago.

“Sweden were a strong side. They’d finished third in the under-17 World Cup. He played them and played well. He lined out at midfield – he could play six, eight or 10 – and did well for us.

“I remember he played in another friendly, against Azerbaijan, and scored a good goal, a strike form the edge of the box. He was technically a good player, a good passer of the ball.

“He played in the qualifiers for us but he was very unfortunate to get an injury at Brighton and didn’t get to the elite stage with us.”

Hutchinson came home and settled into the League of Ireland with Waterford but by then the hurling bug was biting and he wanted to play for his home club Ballygunner with his brothers JJ and Wayne.

Quickly, he became a further weapon for the dominant Waterford champions, who last August racked up a seventh county title in a row. The rapid progress didn’t surprise one of the senior figures in the club.

Pauric Mahony is prevented by injury from playing in what would be his second All-Ireland this weekend but he has watched Hutchinson’s remarkable return to hurling.

“Yeah, I’m not one bit surprised,” he says. “First of all I’ve seen how hard he works on and off the field and I remember a couple of years ago when he was under-21 and he was home for a weekend.

“He won’t mind me saying it now but at the time, Brighton didn’t know he was togging out for Ballygunner under-21s and he came on with 20 minutes to go in the game and he hadn’t trained or done anything and he was just lethal inside.

“At that stage he hadn’t picked up a hurley in five years and he got a couple of points, if he had started we probably would have won the match.

“So we knew when he came back that he’d pick it up fairly quickly and he hasn’t left the hurley out of his hands since he’s come home. It’s great to see him and hopefully he can do it again on Sunday.”

5 Gianluigi Buffon at 43: why messing up is key and what makes him happy