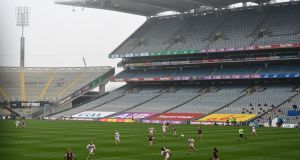 They say controversy is the best, and perhaps only, way to be sure of getting women’s sport into the papers. After a successful All-Ireland semi-final which saw Dublin being pushed by a dogged and determined Armagh, we had an incredibly successful All-Ireland Junior final between Fermanagh and Wicklow, which was eventually won by Fermanagh live on TG4. And then, it all seemed to fall apart . . . and rapidly at that.

Here’s the thing: I so badly wanted this column to be about something else. Saoirse Noonan contesting two senior finals in football and soccer. Maybe Galway heading into a second All-Ireland final, a sure sign that under Tim Rabbitt they were going places after underage talents came through. But it’s not, unfortunately. It would be remiss of me and the column to pretend the events of the last few days didn’t happen.

Cork won at the weekend, and really, that’s the only name on the list of winners. But, there were a lot of losers.

The goings-on over the last week really highlighted the inequalities that exist. In part, these are down to the fact the LGFA, GAA and Camogie Association are three separate entities (something men on Twitter took the opportunity to kindly inform me). The LGFA and Camogie Association are continually relying on the generosity of the men’s organisation to bail them out. Thankfully, relations seem to be harmonious, so this was never an outright issue. But it’s always been kind of there.

A club nearby built a fantastic pitch, 3G pitch, dressing rooms, floodlights, you name it, in the last few years. The two core fundraising objectives were to be assigned to both men and women, as this club were in the unusual position of fielding two women’s team, despite being a rural club. The money came in, pitches were built, and life went on. Until the women’s teams were told the men’s teams were training so they had to use an unlit pitch a bit further down the road.

That club are well within their rights to do that. From a contractual standpoint, the club and facilities are owned by the GAA, not the LGFA or Camogie Association. Morally it’s a bit grey, and everyone tends to get on with it, with some grumblings from a few parties. It’s a situation that is probably replicated across the entire country.

Limerick were well within their rights to keep their county training preparations in LIT Gaelic Grounds, but it still doesn’t make it easier to swallow. Are the LGFA that compromised in terms of bargaining for grounds that the best deal they can make is a one that puts an All-Ireland senior semi-final at risk?

In the end the game was moved to Dublin but at the 11th hour the LGFA informed Galway, who were on the road to the frozen tundra of Parnell Park, the game was being switched to Croke Park and, so as not to disrupt the men’s semi-final, the game was now at 1pm rather than 1.30pm. Oh, sorry TG4, who have been impeccable in their coverage, but current guidelines mean your trucks can’t beam this game into people’s homes.

The language that was used by LGFA president Marie Hickey irked me. She, and her LGFA board, have been unbelievably creative in how they promote the game. They have grown it into this wonderfully PR friendly monster, and that work must be commended. But to use words like ‘grateful’ to the GAA and county boards for bailing them out smacks of insensitivity, especially given how little regard was shown to Galway, who couldn’t go through pre-match routines without referee Seamus Mulvihill - who himself was under pressure to get going - asking them to get a move on.

Pointing the finger isn’t going to help, and doing so would be disingenuous to the excellent work being done. But everyone was a loser here. Galway manager Tim Rabbitt wanted to stage a walk-off. A part of me wondered what would have genuinely happened, had that had happened. But does it have to get that bad before people realise just how much of a disadvantage you’re at because of your gender?

The reality is this: it’ll probably happen again. And again. It’s been going on behind the scenes, only people didn’t realise. We’re supposed to be grateful the men will bail us out. Tell that to an underage team who’ve relocated so many times, hoping it gets better when they hit senior.

Last weekend, for the first time in three years, after hearing so many deflating stories, was the first time I actually felt deflated myself. I was tired and cranky. After countless promises, how could this happen again?

The GPA and WGPA are planning an EGM on officially uniting, something that excites and scares people. Either way, someone loses. Unite and fear you may get left behind. Don’t unite and get left behind anyway, grasping for resources and facilities. Either way, systemic change has to be made.