‘Doing a Davy Fitz and going mad on the sideline’ not what players need, says Darcy 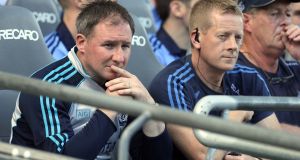 Disclaimer: this is not to be read as a dig at Davy Fitzgerald. The Wexford hurling manager is a highly respected and valued member of the GAA, in a manner so alien to Dublin footballers that the fact he is mentioned by a member of the Dublin backroom simply had to lead this Thursday rumination on Dublin’s drive for five All-Irelands in a row (something they are able to ignore due to the transcendental meditation protocols put in place straight after the greatest 10-minute burst of Gaelic football anyone has witnessed since 1982).

“Well, if you panic, you won’t function,” says Declan Darcy in response to a string of questions about Dublin’s transition from half-time to obliterating Mayo in the All-Ireland semi-final. “So what’s the point in panicking? You could do a Davy Fitz on it all right and go mad on the sideline but is that going to last too long with these players?

“They need qualified information, they need calm.” Don’t we all Declan, don’t we all.

“That’s the way we do it. There’s no point getting carried away because you’re not going to do service to the group by doing that. That would only feed into them panicking themselves or losing the run of themselves or getting sent off. Our discipline has been very strong this year. We will need that the next day as well.”

There’s nothing worse than a 10- or 11-year-old coming up to you and going, ‘How are they beating us?’

Interestingly, Darcy’s Dublin brief is to “look after the defensive plays” despite being remembered as a razor-sharp forward in his blue and navy playing days.

“Everyone asks that. My demeanour maybe! It’s always been the way, ever since I’ve been with Jim [Gavin] with the 21s as well. It kind of has evolved over the years – obviously kick-outs are big part of the game now.

“It’s a mindset thing. How you think about the game. How I look at players. I see teams playing and functioning and so maybe I can break that down, if that makes sense. I can see how they operate and how they’re successful so I can then go about breaking it down. Maybe it’s reverse psychology. I played centre-back with Leitrim and then most of my football as a forward.

“The game has completely changed since I was playing,” Darcy continues. “I coach a lot with kids in Clanna Gael and I get a lot of learning from that. If I was advising any coach at a higher level how to improve, it would be to go and coach kids’ teams. It brings you right back down to reality and gets your feet firmly on the ground. There’s nothing worse than a 10- or 11-year-old coming up to you and going, ‘How are they beating us?’ That’s the sort of thing that keeps your mind turning over.”

And as far away as possible from thinking “about that goal”. By the way, Seamus Darby’s autobiography (About That Goal with PJ Cunningham) hits bookshelves today.

If anyone is going to break ball for Kerry in the dying seconds of Sunday’s All-Ireland final it will be Tommy Walsh.

But we’d like to play the game the way it should be played. That’s our philosophy

“If you dump the ball in on anybody’s square that is going to cause a bit of chaos. It doesn’t matter who you have in there. It could just break or fall or someone gets and easy goal. But the reality of it is that it hasn’t really functioned against us. It hasn’t cost us. There is a danger to it obviously but the lads understand that and they’ve dealt with it well.”

Walsh returned from exile with two vital contributions to help Kerry past Tyrone. “It brings a different dynamic to it all right, yeah. It’ll be interesting to see how it goes. Clifford is a big man as well. He’s probably as big as Tommy but maybe not as brash as him. But it’ll certainly be a different type of football we’ll be playing the next day. But that’s the type of football we want to play. We want to play traditional football.