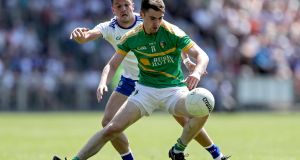 In his fourth season as a Leitrim senior, Ryan O’Rourke has tallied 4-22 overall so far. Photograph: Laszlo Geczo/Inpho

In their efforts to explain Leitrim’s promotion from Division 4 of the Allianz football league, commentators have inevitably focused on the form of Ryan O’Rourke.

In his fourth season as a Leitrim senior, the forward has been their standout player, beginning their group campaign with 2-7 against Wexford, concluding it with 1-4 against Waterford, and tallying 4-22 overall.

He is part of a talented group of players that have come up through the ranks together, winning a highly significant Connacht minor league title in 2014.

Yet ask the man himself what’s different this year, having been in Division 4 since 2009, and he intriguingly points to the input of Robert Moorhouse, a business and personal coach who is a friend of new manager Terry Hyland.

“He’s kind of a life coach, he’s a friend of Terry’s and we’d meet up with him the odd time,” said O’Rourke in advance of Saturday’s Division 4 final against Derry at Croke Park. “He did some activities with us, challenges you’d maybe think were impossible at first and then through team-work and trial and error you’d actually complete the task.

“The next thing you realise you’re quicker and faster completing the challenge the next time you do it. It’s very clever stuff and makes you see things differently. We did workshops with him the day before games sometimes.

“You might get a group of lads that wouldn’t buy into that sort of thing but we were very much engaged with it and have benefited a lot, I think.”

When we won that minor league, there was a lot of talk about that group of players and we’ve got a lot of those through now as seniors

Hyland guided Cavan to the All-Ireland quarter-finals in 2013 and has brought all that experience and know-how to the tiny Connacht county that finished eight points off the promotion places in 2018.

“He has a lot of experience, he’s worked with successful U-21 teams too and has been brilliant to work with,” said O’Rourke. “He’s been very strong on the mental side of things with us and realised that it was an area that could definitely be improved.”

Leitrim have averaged out at under three games per Championship campaign since the qualifiers were introduced in 2001, just 49 games in 18 summers. They’re scheduled to play Roscommon in this year’s Connacht quarter-finals on May 12 having lost to the same team by 14 points (2018), 17 points (2017) and 13 points (2016) in recent summers.

It’s no surprise then that O’Rourke admitted they targeted the league as their best opportunity to make progress.

“We’ve always looked at the league as being our Championship, we’ve had to because when you have Galway, Mayo and Roscommon, three Division 1 teams, in the province and Sligo also from Division 3, you’re always going to be up against it,” he said.

“To have any hope of doing well in the Championship long-term you need to be in a higher division and that’s why promotion was so important.”

It didn’t come as any great surprise to the ambitious O’Rourke that it happened, despite their decade of languishing in the bottom tier.

“There’d be maybe 10 lads around my age on the panel that have been playing together and doing well for years,” explained O’Rourke.

“We won the Connacht minor league in 2014. It was our first time winning that since 1991. It was a huge achievement for Leitrim and the same team lost narrowly to Galway in the 2017 Connacht U-21 championship.

“A couple of our stronger players actually had injuries that day and Galway just about got past us. They ended up playing Dublin in the All-Ireland final that year.

“When we won that minor league, there was a lot of talk about that group of players and we’ve got a lot of those through now as seniors. We were coming in to the setup with a bit of optimism and confidence and believing we could be competitive.

“Now that we’ve got promotion, we’re not just going to sit back and say ‘job done’. People from the outside might look at Leitrim and think it’s a once-in-a-blue moon thing, and that we’ll go straight back down, but we’re not thinking like that at all. We’re really looking forward to the bigger challenge and we want to keep moving forward.”

Leitrim will literally be treading new ground at Croke Park on Saturday compared to Derry who contested the 2014 Division 1 final there against Dublin.

“It’s massive, it’s the dream we’ve all had to play there,” said O’Rourke. “Who knows if you’re ever going to get the chance to play there again? But we won’t be getting carried away either. Once the game starts and the warm-up is over we’ll only be thinking about the O’Neills ball.”