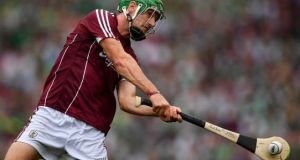 David Burke: his team St Thomas’s of Galway take on Antrim’s Cushendall in a club championships semi-final in Parnell Park on Saturday

SHC semi-finals – St Thomas’s (Galway) v Cushendall (Antrim), Parnell Park, 3.0 [Live, TG4] – Former champions St Thomas’s have reason to be wary of their Antrim opponents as in their All-Ireland year it took a replay to eliminate then champions Loughgiel. In the six years since the club’s big players have matured, and David Burke has captained Galway to an All-Ireland. Cushendall aren’t quite at the level that Loughgiel hit in 2012, but they are solid and the dead-ball exploits and general marksmanship of Neil McManus deserves respect. The Galway champions, though, are a quality side and should progress to the final. Verdict: St Thomas’s

Ballygunner (Waterford) v Ballyhale Shamrocks (Kilkenny), Semple Stadium, 5.0 [Live, TG4] – This could be a cracker. Ballygunner finally picked their way through the Munster minefield to bridge the gap back to 2001 and their previous provincial title, and in so doing inflicted on former All-Ireland champions Na Piarsaigh a first defeat in Munster. During those 17 years Ballyhale have added another three All-Irelands, and in Thurles on Saturday afternoon Henry Shefflin brings his club along the road of a fourth. There are a number of talented new players, such as the Mullens, Adrian and Darren, to complement the experience of the Fennellys, Michael and Colin, and TJ Reid. Crucially they have coped with the long break before whereas Ballygunner will have had to work out how to best pace themselves from the high of provincial success to rising again early three months later. They have a very solid unit, though, with county players including Pauric and Philip Mahony and former All Star goalkeeper Stephen O’Keeffe, who won’t be intimidated by their opponents’ reputation. Toss of a coin. Verdict: Ballygunner

Kilcummin (Kerry) v Naomh Éanna (Antrim), Croke Park, 4.45pm [Live, TG4 online] – Experienced former Antrim manager Frank Fitzsimons has made a big impact on Naomh Éanna, who shocked An Spidéal in the semi-final. Kilcummin are heirs to the rich tradition Kerry clubs enjoy in this, but also competitive when they have to be and are deserved favourites. Verdict: Kilcummin

Kerry v Dublin, Austin Stack Park [Live, eir sport 1 and RTÉ 2] – Were this not sufficiently eagerly awaited, the intrigue surrounding Jason Sherlock’s future with Jim Gavin’s management team adds to interest in this sold-out encounter between the old rivals. Kerry have made a good start with two from two even if this promises to be a step up from the feisty first-half performance by Cavan and the subdued opposition provided by Tyrone. Dublin were stung in Monaghan on the opening day but back to their routine efficiencies against an unambitious and labouring Galway. Kerry’s attack has been brilliantly led by Seán O’Shea and if the growing defensive confidence was challenged by Cavan’s early use of quick ball they have kept two clean sheets to date (last year after two rounds they had conceded five goals). Dublin, with Paul Mannion, Dean Rock and Cormac Costello all looking sharp, will test that. The atmosphere two years ago was electric but may not crackle to the same extent on Saturday. All the same, it should be interesting. Verdict: Dublin

Mayo v Cavan, MacHale Park [Live, eir sport 2] – James Horan has had about as good an opening fortnight as he could have wished for: two wins from two (it took until the last day of the season to surpass four points last year) and the rotating of some decent young talent to shake up the panel. Tyrone’s listless start to the league is a caveat in respect of the fine win in Omagh, but there was plenty to admire in how Mayo went about their business – which, in fairness, there was also in the case of Cavan’s first-half performance against Kerry. Horan has rotated again and named David Clarke in goal for the first time this season as well as Ger Cafferkey. Cavan will be hoping that Dara McVeety and Ciarán Brady overcome the knocks that forced them off last week. Hard to look beyond the home side’s momentum, though. Verdict: Mayo

Fermanagh v Kildare, Brewster Park, 7pm: Rory Gallagher must be wondering what it will take to get Fermanagh over the winning line, drawing both games to date against Cork, then Tipperary – that helter-skelter finish surmising their league so far. Both low-scoring games, they’ll find that hard against a Kildare team that found some pace against Cork last weekend, despite finishing with 13 men, Neil Flynn scoring 0-3 off the bench, and not scoring in the last 10 minutes. Another win here would further stake their claim to promotion. Verdict: Kildare

Down v Westmeath, Pairc Esler, 7pm: Nothing beats the injury-time goal, Caolan Mooney’s late effort securing a first league win for Paddy Tally’s Down team against Sligo last weekend, and deservedly so. Westmeath, with one win and one draw, will test their Pairc Esler advantage, but the confidence is back with the home team. Verdict: Down

Roscommon v Tyrone Dr Hyde Park [Deferred, TG4] – On available form the home side will fancy themselves here. Last week’s win over Monaghan was a tenacious day’s work and a creditable follow-up to their competitive opener in Castlebar. Former Kerry player Conor Cox played a big role in the win, including scoring the winner. Tyrone find themselves rooted to the bottom of the table, surprisingly after another good pre-season in the McKenna Cup. Mickey Harte has a solid enough team named – whatever about who takes the field – for what will be a demanding assignment in front of a buzzed-up home support and the instinct is that they will rediscover enough form to take the points here.Verdict: Tyrone

Monaghan v Galway, Inniskeen [Live, TG4] – Two teams with a 50-50 record to date and a fair bit of recent history. The evening Galway’s progressive 2018 went off the rails was when Monaghan arrived in Salthill for the last of the All-Ireland quarter-final round robins. The home side’s performance was astonishingly poor and it was downhill from there. Against Dublin they flattered to deceive and have now been further reduced by injuries to Cillian McDaid, who was impressive early on last week but now needs surgery on his foot, former All Star nominee Declan Kyne (ankle injury), and full back Seán Andy Ó Ceallaigh (shoulder). At home Monaghan will want to get back on the track that led them to beat Dublin on opening day. Verdict: Monaghan

Clare v Cork, Cusack Park, 2pm; A must-win scenario already for both teams. Cork manager Ronan McCarthy is without the suspended Brian Hurley, and confidence is still precious after losing at home to Kildare last Sunday. Clare lost Dermot Coughlan long-term to a broken ankle in the frantic loss to Armagh, a game where they still showed much promise. Desperation cries louder for Cork, however. Verdict: Clare

Meath v Armagh, Pairc Tailteann, 2pm: One of the games of the weekend, and possibly influencing promotion already. Meath fell just short against Donegal last week, and Armagh skipped past Clare, even if losing Jamie Clarke to a red card (suspended here). Yet the chance to lay down a statement at Pairc Tailteann has to carry some weight for Andy McEntee’s team. It might get loud. Verdict: Meath

Tipperary v Donegal, Semple Stadium, 2pm: Without over-extending themselves, Donegal are already right back in the hunt for promotion, even without seasoned players such as Michael Murphy. Tipperary have struggled to get their mojo working, and Declan Bonner’s youthful team should continue their rise. Verdict: Donegal

Carlow v Longford, Netwatch Cullen Park, 2pm: Carlow still rising on all fronts, and even if last weekend’s draw with Westmeath put a temporary hold on their football, Turlough O’Brien’s team continue to move in the right direction. Darragh Foley was their ace up front last weekend, and with Longford still more depleted by injury, Carlow hold the better cards here too. Verdict: Carlow

Laois v Sligo, O’Moore Park, 2pm: Back on home ground after playing in Croke Park last Saturday, the penalty for breaking training rules in 2018, Laois need a win here, their paltry 0-2 from play the last day an obvious area for improvement. Sligo are the only team in the division without a win, and will find that hard here too. Verdict: Laois

Waterford v Derry, Fraher Field, 12.30 – Derry improved a little to maintain a winning start to the season, whereas Waterford were a little unlucky in losing to Wicklow. Respective trajectories headed for something like the seven-point win the visitors enjoyed in the qualifiers two years ago. Verdict: Derry.

Leitrim v Antrim, Pairc Sean MacDiarmada – Leitrim have been the good news story in the division so far. Terry Hyland has got them moving earlier than usual, and the talented under-21s from 2017 are having an impact. Antrim aren’t pushovers but this looks a home win. Verdict: Leitrim

London v Wexford, McGovern Park – Having steadied themselves after the traumatic first day in Carrick-on-Shannon, Paul McLoughlin’s team should be able to maintain the comeback against a London side that have been consistently competitive. Verdict: Wexford

Wicklow v Limerick, Aughrim – This looks hard to call. Leitrim got a decent win in Aughrim, and Limerick have been having a better campaign but John Evans’s team can get off the mark. Verdict: Wicklow

IHC final Charleville (Cork) v Oranmore-Maree (Galway), Croke Park, 3.15 [Live, TG4 online] – Star-studded managements (All-Ireland winners Ben O’Connor on one side and Gerry McInerney and Pat Malone on the other) and a fair sprinkling on the field as well, although the Cork champions have concerns about All-Star Darragh Fitzgibbon’s injury. Verdict: Charleville