Mayo dig deep to begin 2018 journey with win over Monaghan 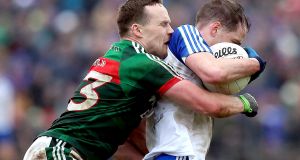 They’re either gluttons for punishment or there is no one quite like the Mayo football supporter. Winter or summer it seems there is no discontent.

They arrived in Clones in their MO registrations, glowing faces defying the gloomy afternoon, and left having seen their team shake-off another All-Ireland defeat with Paddy Durcan shooting a brilliant 74th minute winner. Never a dull moment.

It was classic winter football: zero goal chances and all about the hard grind, only when it came to final showdown, Mayo simply dipped once more into that endless well of resilience: Adam Gallagher had dropped short one winning chance, then Durcan made instant amend with a sweet chip from down the right sideline.

By then Monaghan’s brave fight was done: they’d only 12 men left on the field in the end, losing defenders Ryan Wylie to a straight red (67th minute) and Barry Kerr to a second yellow (69th minute), before Dermot Malone was black-carded at the death at which point they’d no more replacements. They’d given their all – in every sense.

Mayo were the better team for the second half, corner back Eoin O’Donoghue wrapping up his first senior start with a thoroughly impressive effort, adding a point to boot. Jason Gibbons is back on board and showed up well at midfield and Neil Doughlas has emerged as another scoring threat up front, scoring four from placed-balls.

Mayo manager Stephen Rochford hadn’t yet won an opening league game during his tenure, content therefore on many levels: “Lucky in some ways, but overall I thought the application was very good for a team that hasn’t done a lot,” he said, looking fresh and ready for the new season.

“When we put ourselves three points up in the second half I thought we could have controlled it a bit better, but that was probably just evidence of our rustiness. Eoin getting his first start, I thought had a fine, fine game. He was very good minor and under-21, but it’s about stepping up and being consistent, and there’s another big challenge coming in six days against Kerry.

“Jason at midfield too I thought had a big second half, and Neil Douglas I thought showed mental character to kick two big frees in the second half. And it’s about who’s here, not who isn’t here. That was certainly a good hard game, and again, great leadership around the field, and very happy with the way they applied themselves.”

Monaghan manager Malachy O’Rourke however didn’t hide his discontent at the “cruel” nature of the loss, particularly Wylie’s straight red (for what appeared to be foul play on Aidan O’Shea: “A very cruel way, and very, very disappointed,” he said. “I thought the boys showed great resilience to come back level, were attacking with the ball in the full forward line, and I thought there was a clear push in the back, and the referee didn’t give it. He gave a free out, and they won the game. I thought everyone else could see it, so a strange one to me. So a couple of incidents we wouldn’t be happy with.

“But I thought the character the boys showed was top class. They refused to die, and that’s what makes that decision at the end so disappointing. That’s what happens sometimes, the top teams get them, and the other teams don’t. We want to win every game we play, and I think that showed there today.”

Andy Moran, footballer of the year, was a late addition to Mayo’s starting team and opened their scoring too on 10 minutes with a typically deft strike. Monaghan – with Conor McManus still in hibernation – were a little quicker off the mark and set the pace for most of the first half, although the sides were level three times during that that period, including 0-7 apiece at half time. Six of those Monaghan scores came from play, Karl O’Connell scoring two from centre back, the lively David Garland scoring one.

Mayo started with 10 players that featured in that All-Ireland defeat to Dublin, and Cillian O’Connor also came off the bench. Evan Regan finished with 0-5, four frees, and the more the game turned into a battle of spirits, the more Mayo players showed up. Colm Boyle did retire early with reportedly nothing worse than a dead leg, and the more winter turns to spring, the more Mayo will seem ready for it.

Proposals for an annual Club World Cup seem fanciful at best 21:00
Liverpool reverse decision to use government furlough scheme 19:43
McLaren boss warns coronavirus impact could threaten Formula One 18:45
New PGA Tour schedule could bring an end to the year like no other 18:42
Jones says new players will form 60 per cent of England’s next World Cup squad 18:30
Crossword Get access to over 6,000 interactive crosswords