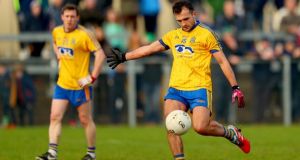 Donie Smith repeated his heroics of last year’s All-Ireland quarter-final to rescue a draw for Roscommon, with a nerveless 77th-minute goal from a penalty in a topsy-turvy Division Two match against Meath at Hyde Park.

Before an attendance of 4,000 spectators, Roscommon were cruising to victory as they led by five points after 53 minutes. However, they idled in front and lost the initiative to a Meath team who were transformed by the introduction of substitutes Eamon Wallace, Pádraig McKeever and Seán Tobin.

In contrast, Roscommon lost Diarmuid Murtagh through injury while their substitutions disrupted the team’s rhythm until Smith was brought on with six minutes left.

When Ciarán Murtagh pushed Roscommon into a five-point lead in the 53rd minute the game looked over. However four points in six minutes from McKeever (two) and Tobin (two) brought the Meath team and supporters to life. Tobin equalised and Seamus Lavin gave them the lead.

When Wallace drilled his shot to the net after 67 minutes Meath looked to have completed a sensational comeback. However, it was then Roscommon’s turn to rally. Inspired by Seán Mullooly, they poured forward.

Finbar Cregg converted a free, and in their last attack Enda Smith fouled Cregg who was hauled down. Despite a long delay Smith held his nerve to slot a low shot beyond Andrew Colgan.

Despite playing against the wind Roscommon led by 1-6 to 1-5 at half-time. The quicksilver Cillian O’Sullivan propelled Meath into the lead with a marvellous individual goal after 10 minutes.

Scores from Enda Smith and Niall Kilroy brought them level by the 17th minute before they scored a super goal. Ciarain Murtagh sent a pinpoint pass to Mullooly who lobbed a precise shot into the net. Points from Thomas O’Reilly and Joey Wallace reduced the deficit to one by half-time.

City slip up at home to Palace 17:22
Shane Long ends drought but Southampton lose out 17:18
Walsh leads from the front for Galway 17:03
Longford claim first O’Byrne Cup since 2000 16:43
Leinster qualify as top seeds with Benetton win 15:50
Crossword Get access to over 6,000 interactive crosswords