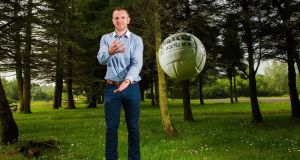 Marty McGrath will be in action for Ederney St Joseph’s in the final of Fermanagh SFC against Derrygonnelly Harps on Sunday. Photograph: Tommy Dickson/Inpho

Twenty five years ago Marty McGrath made his debut for Ederney St Joseph’s senior team at just 14-years-old. A few weeks earlier he was standing on the bank in Irvinestown watching his club exit the Fermanagh championship to Derrygonnelly Harps, who went on to win their very first New York Cup.

Tom Conaghan, who had led Donegal under-21s to an All-Ireland title in 1982, was the manager. He gave McGrath the rest of the league to get used to it.

He could look after himself. A promising boxer, he lifted a few Ulster titles at underage. And he had pedigree. When the club lifted their one senior football championship in 1968 it wasn’t so much backboned by, than stuffed full of seven of ‘The Mighty McGrath Brothers’.

His father Anthony was the eldest. His uncle Leonard is a builder who sponsors the jerseys. The youngest is Tom, proprietor of The Black Sheep bar in Manhattan and the man who broke the world record for the fastest run across America in 1977.

Adding another championship has spawned the generations. This is McGrath’s 25th season chasing one. In the middle of all that he played 14 seasons with the county, won an All Star in 2004 and captained them to the Ulster final replay against Armagh in 2008. He’s had treatment for cancer. Had operations on his heart. Was struck by a digger bucket.

And still he persists, on to this Sunday in Brewster Park and one ear of the New York Cup tied in white and green ribbons, the other in the purple and gold of defending champions Derrygonnelly Harps. The task is enormous. Harps are chasing six-in-a-row and last year gave All-Ireland finalists Kilcoo a torrid time in their Ulster club meeting.

Ederney got to the big day out in 2006 and 2018, well beaten on both occasions. Partly down to the typically freak occurrences that have dogged McGrath – each time he tore a quad muscle in the final training session before.

If he was Sisyphus, that boulder would have rolled over and broken a toe.

“During lockdown I wouldn’t say I was loving football. I didn’t miss it,” he explains. “What I did miss was the camaraderie, the craic that you would have at training. I enjoyed the intensity of training and the physicality of it.

“Through lockdown I didn’t miss it because it wasn’t on but I knew if it had been on and I wasn’t at it, I would have missed it.

“I like the fact that – and this is the same for Ederney and many other clubs all over the country – GAA is the main focus of the parish. It’s a big emphasis for the parish that the GAA teams do well. They see what it brings to a lot of people.

“When you are younger, you pass no remarks because you are there to play football and you don’t see what happens. Even when I played for the county team, in 2004 you didn’t appreciate what it meant to the young people in the county.

“You see now, that I have youngsters of my own, how they talk about the football.”

After they eased past Teemore in the semi-final on a 2-16 to 3-7 scoreline, Fermanagh TV commentator Ger Treacy had some young fans gathered round him, anxious to get at the microphone. Asked to name who was man of the match, they all named Marty McGrath.

Naturally. They were all his nephews and eldest son, Dan.

Last year, the club opened up a new stand and clubrooms. They assembled the men of ’68 for a presentation.

“A number of them got together and talked. We did a wee video of them talking and I took a lot of enjoyment of watching my father and uncles and all the team-mates having a chat. Unless you win, you might not get that opportunity with the team in 20 years’ time, or whenever it might be.

It won’t be for lack of effort.