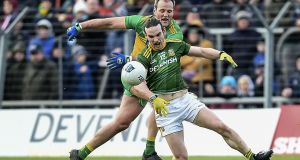 The first goal was properly unstoppable and so began another Royal comedown.

If Meath’s problem in recent meetings against Donegal was holding out until the end, this time they couldn’t last half an hour, the first small mercy in the 10-point defeat being that it wasn’t a whole lot more. Two more goals at least.

Perhaps some small mercy too in that Meath’s goalkeeping merry-go-round of late can hardly be blamed: Marcus Brennan, the near veteran at age 35, was dropped in before the start in place on Barry Dardis, immediately under pressure to hold the fort where others couldn’t.

After 15 minutes Brennan got his first big chance, Donegal forward Jamie Brennan dragged down in front of goal with an early sign of his lasting electricity: up stepped Michael Murphy to deliver a powerful inch-perfect shot into the bottom left of the goal, only for Brennan to somehow get his palm down to it. Fantastic save.

At that stage Meath were still up 0-3 to 0-1, and even with the strong breeze in the backs were showing plenty of effort and work rate and all the other things a manager can’t fault.

Then on 28 minutes, after holding possession through more phases than the Iliad, Donegal cut through again out of the proverbial nowhere, that unstoppable shot delivered beautifully by Odhrán McFaddan Ferry and putting Donegal ahead 1-2 to 0-2; from there they never looked back.

Three minutes before the break, Brennan was fouled again in front of goal, Ryan McHugh setting him flying and free (Conor McGill was black-carded for the foul): up stepped Murphy for the second time, appearing to stare Brennan briefly in the eye, before presenting his shot in the exact same bottom left of the goal. Only no stopping it this time.

With that Donegal were already double scores up, 2-2 to 0-4, for the half-time intermission, with the wind at the backs to come. Four minutes after the restart, and with McHugh again the provider, Michael Langan finished off a super counter-attack with Donegal’s third goal.

Pairc Tailteann, gently heaving for the first 15 minutes or so, was numb.

Brennan, to his credit, kept his cool in the Meath goal (and in the face of the afternoon sunshine) to deflect Brennan’s shot at goal in the last quarter onto the crossbar. At the death too Murphy was fouled right on the edge of what might have been a third penalty. Another small mercy.

All Meath could muster in that second half, when with the wind, was three points, Thomas O’Reilly providing the best of them. They appeared tired and at times a little lost, and even after emptying their bench with 10 minutes to go there was little resistance, Donegal goalkeeper Shaun Patton enjoying a perfectly relaxed afternoon compared to what was happening at the other end.

Little wonder then Donegal manager Declan Bonner was beaming afterwards. “Certainly taking two points away from home in Divsion One is a good day,” noted Bonner, this being their first win of the campaign. “I felt the first 15, 20 minutes, maybe there was a small bit of a hangover from last Saturday (where Mayo equalised at the death), but from there on I thought we were in complete control, to be honest, and probably should have got a few more scores on the board. That’s the only disappointing factor.

“I thought the way we moved the ball for those goals was top class, and yes we should probably have had two more. But no time to rest on that, not with the challenge of Galway coming to Letterkenny next Sunday.

“We’re working off a squad where experience is important, in division one. We had three matches with Meath last year, and there were all good, competitive matches, but we finished the game well here, never too the foot off the pedal. That’s something we’re look for, in terms of work rate.”

Brennan was very impressive, handling buckets of possession, a constant outlet on and off the ball and scoring two from play in the process, Langan delivering yet more on his promise at midfield, finishing with 1-1. McFadden Ferry showed ample guile to finish his goal, and Niall O’Donnell also added a point off the bench.

Everything looks like it’s up when you’re lying on the bottom, only for Meath a win over Mayo back in Navan next weekend is now looking vital to avoid a sudden drop back to Division Two.

Due to family circumstances, not the result, Meath manager Andy McEntee wasn’t available for comment afterwards

1 Irish pack must expose the weakness in England’s backrow
2 Keeping Donegal on the road to success a costly business
3 TV View: Roy Keane but Daragh’s keener as Late Late fails to shoot the lights out
4 England v Ireland preview: Ireland’s revival to face its sternest test
5 Ireland Slam England at the Gardens to open up Grand ambitions
Real news has value SUBSCRIBE