Kerry edge out Castlebar thriller to leave Mayo in trouble 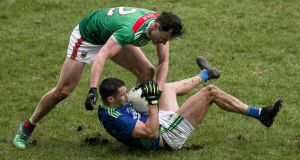 This repeat of the National League final at MacHale Park on Sunday finally burst to life in the second half as Kerry turned the tables on Mayo in this fifth round clash before a crowd of just over 8,000.

Trailing by seven points at the break (1-8 to 0-4), James Horan sent out a new team for the second half making three half-time substitutions and they almost pulled it off with Aidan O’Shea and Diarmuid O’Connor, both absent in the first half, taking over at midfield. Inspired by a brilliant goal from substitute Eoghan McLaughlin, Mayo gradually reeled Kerry back in for a grandstand finish.

However, a superb point from Kerry’s Diarmuid O’Connor made it a three-point game again as Kerry looked to have weathered the Mayo storm but it was only beginning as the league champions kept coming back, paring the lead back to a single point on no fewer than three occasions and looking like they might steal a point only for Keith Higgins to blaze wide with the chance of an equaliser as four minutes of injury-time were played.

Mayo manager James Horan was left to bemoaning Mayo’s failure to play with the same fire in the first half as they had done in the second.

“We didn’t play for the 70 minutes and it cost us,” said the Mayo manager.

“Our workrate was much better in the second half but the damage was done in that first half when we fell seven points behind with the wind.

“Now we have two weeks to get working for the what is a massive game against Galway but at least that second half was encouraging but we have a lot to work on besides,” he said.

The feeling was that Mayo failed to utilise the wind in the first half when they scored just four points but they outscored Kerry by 1-9 to 0-6 in the second half and at one stage looked like they might bag the win that would ease their relegation worries.

However, the result leaves Mayo in difficulty on three points as they contemplate that tough away game to Galway in the next round and a likely final showdown with Tyrone in the final round at MacHale Park.

In thar difficult first half, Mayo’s only points came from Kevin McLoughlin frees in injury-time with Tom Parsons pointing their only score from play.

It could have been worse for the defending league champions had the crossbar not denied David Clifford a goal from the penalty-spot after Keith Higgins had taken down Dara Moynihan in the square.

Higgins was also at fault for a stray pass out of defence which led to the Kerry goal after just two minutes as Michael Burns pounced on a careless clearance before linking with Tommy Walsh who set up Seán O’Shea, the Kerry centre-forward side-stepping David Clarke before placing the ball into an empty net.

Chances for Mayo were few and far between as Kerry dominated around the middle with Burns, Moynihan, Gavin White, Tony Brosnan and Clifford all scoring from play.

Eleven minutes into the second half the momentum suddenly swung to Mayo as a low shot from substitute McLaughlin from 20 yards found the net after the Kerry goalkeeper Shane Ryan was turned over.

Tommy Conroy – another of those second half substitutes – found the target along with Eoin O’Donoghue as Mayo began to close the gap but Kerry to their credit clung on for what was a deserving win in the end as they now move closer to qualifying for a place in the final while Mayo will need to produce more of the football they played in the second half if they are to avoid relegation from Davison One for the first time ever.