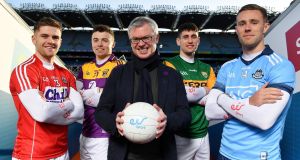 Joe Brolly’s greeting is that of a man looking to equalise before the other team scores. “As my father said one time, I won’t be apologising to the likes of you,” he smiles. The hacks are gathering on the sixth floor of Croke Park, ostensibly to launch Eir Sport’s coverage of the upcoming National League but really to hear how the GAA’s favourite pain in the hole is going to talk his way out of this one.

“I would never for example work with Sky or Eir,” he declared on Twitter a mere five months before signing up to work for Eir (and deleting the Tweet). So go on, Joe. Explain yourself.

“I met Páraic Duffy at least three times before the first rights issue, before the second rights issue as well. He came to see me in Belfast and asked for my support. He asked me to stop what I was doing.

‘Howling into the wilderness’

“And we’re 10 years down the line now and eventually you have to come to the realisation that you’re howling into the wilderness. The decision has been made by the GAA and there’s no going back. I love the GAA and I’ll defend it to the death to the outside world, even if I excoriate it on the inside and to the hierarchy.

“But you look at it – even my own kids are saying, ‘What are you doing?’ And I suppose increasingly, if you’re the only one out there with a pitchfork, you’re in danger of becoming irrelevant. A friend of mine said, ‘You’re like f***ing Aontú’.”

Be that as it may, surely this is Groucho Marx made flesh? These are my principles – you don’t like ’em? I got others. Nobody particularly cares how Joe Brolly chooses to make a living – it’s the lofty Fíor Gael purity that gets people’s backs up. Doesn’t this make him a hypocrite?

“Well, I don’t know, I mean I suppose you could say that. For me I think sooner or later you’ve got to move on. I can’t keep . . . Like, in 10 years who is even going to remember any of this? ‘Is he still f***ing banging on about that?’ It annoyed me at the time now and in those meetings with Páraic Duffy, I was extremely annoyed.

“I take your point, I know what you’re saying. But I’ve chosen to do it. I think the reality is you either become irrelevant or you accept the reality. The GAA has made this decision. It’s set in stone. I had conversations at a high level two years ago, this is over. Nobody is talking about it. No players are talking about it. I mean, if you said it to any of the players here today, they would say, ‘Have you lost your f***ing mind?’ It’s a generational thing.

“The next job now is to persuade providers like Eir, for example, and these are conversations I’m going to be having with them, about putting the sports packages into the hospitals for free, which would be a huge thing.”

And just to go the whole hog on it, Brolly didn’t rule out working for Sky Sports in the 2020 championship if the opportunity arose. “I don’t know. I sort of resist the temptation to say yes. No, I mean with the Eir thing – they showed me their statistics and they said they had 600,000 subscribers who get the sports package for free with their phone. There is a world after RTÉ and I have to accept in the modern world, the whole broadcasting landscape has changed.”

Brolly’s mention of RTÉ was neither off-hand nor isolated. In the course of a 37-minute conversation, he spent almost half of our time together talking of his hurt at how his 20-year stint had ended at the national broadcaster and laying out his grievances with Head of Sport Declan McBennett.

“I thought he was joking whenever it happened. He said to me – and he repeated it three times – that on the day of the drawn final, at 11 minutes past three, you behaved outrageously and unprofessionally towards a fellow pundit, Pat Spillane – you said to him, ‘Would you stop pulling my arm?’ I said, ‘Have you lost your marbles? Are you serious?. He said, ‘Yes, seriously. We’re not renewing your contract’.

“I was very annoyed about it. And also the high-handed . . . like, I’m a big boy and that’s it. I appreciate, look, I’m not the head of sport, he makes the decisions, that’s the end of it. But, you know, 20 years, being such a strong part of the public conversation. And then there wasn’t even a . . . Jesus, I didn’t even get a f***ing clock!”

So signing up to Eir is an act of vengeance?

“Haha! No, I wouldn’t say that. That would not be right. But I loved the public conversation, don’t get me wrong. I was surprised by how enthusiastic I was when I got the call from Eir. I didn’t expect to get a call from anybody. And when I got the call, I could feel instinctively that I’d like to do it.”