James Horan: ‘We only won by three, I’m more than happy with that’ 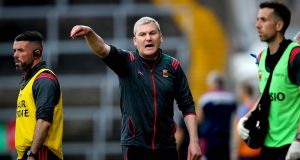 Mayo Manager James Horan at the All-Ireland SFC round 4 qualifier between Mayo and Galway at LIT Gaelic Grounds in Limerick. Photograph: Ryan Byrne/Inpho 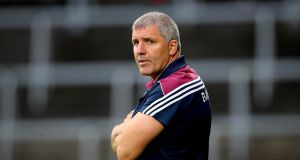 Galway manager Kevin Walsh at the All-Ireland SFC round 4 qualifier between Mayo and Galway at LIT Gaelic Grounds in Limerick. Photograph: Ryan Byrne/Inpho

What goes around, comes around. Five years ago, give or take, James Horan stepped down as Mayo manager after an All-Ireland extra-time defeat by Kerry in Limerick. On Saturday night in the LIT Gaelic Grounds, it was a happier experience for Horan, as the county redressed its recent bad run – four years – against Galway with a crucial win in round four of the qualifiers.

Mayo now break through into the All-Ireland quarter-final round robin, their absence from which a year ago created a Banquo’s ghost for the Super 8s.

“We only won by three,” was Horan’s reaction. “I’m more than happy with that. The [Galway] goal from the free was crazy so that would make it six points. I don’t think there’s any story in that. As I said, I’m delighted with a lot of stuff.

“We had a lot of goal chances and two of our goal chances I was sure they were frees at a minimum. We went down, got surrounded and the ball went down, so it gave Galway a bit of momentum when we had scores on, and if we took those scores it would have been different.”

They head to Killarney next Sunday to take on Munster champions Kerry, who they have already beaten twice this year, including in last March’s league final. Horan played down comments he had made after that encounter that Mayo could have won by 12, instead of the four points that actually separated the teams.

“I’m sure Kerry really don’t care what I say, to be honest. I just thought that on the day – we created a lot of goal chances that we didn’t take. We took our first two but missed our next three. That was my initial reaction. I try and be as straight as I can. I don’t think Kerry will give two hoots about what I say.”

To be honest, we just focused on ourselves, trying to get the best out of ourselves each week

Man of the Match Darren Coen accepted that they had a score to settle with the neighbours but, having done so, swiftly got back on-message.

“A small bit. To be honest, we just focused on ourselves, trying to get the best out of ourselves each week. We’re building week on week. Our aim was to get out of the qualifiers. A new competition [is] starting now with the Super 8s and we can’t wait.”

“I suppose they got a run at us at different stages and I suppose the goals were sucker punches,” said last year’s captain Damien Comer, who made a long-awaited return to action in the second half after missing six months with an ankle injury.

“They were carrying momentum from other games coming into it. We had the three weeks off and often you can find that in games. Once they got that run on us they shocked us a small bit. We resettled well and had good chances to get back into it, but fell short, which is disappointing.”

Manager Kevin Walsh played down the poor start, preferring to emphasise the resistance shown by his team in chasing the match until the end.

“Look, there were loads of factors in there. I have a lot going on, on the sideline. You probably see a lot more than I see. Two goals obviously went in. There was plenty of time to go in the game but we had to try and get back into it. Mayo are a good side so it’s not as simple as turning on a tap.”

He bristled at a question about having to adjust defensive tactics to chase the game.

“I wouldn’t say we were so far behind. We do that but unfortunately the type of crap that’s being put out by the guys on top who have plenty of table to sit behind, has actually driven an agenda.

“It’s a case of, if there is space there, we will do it, and if there isn’t, we won’t. It’s about ball retention. Some of the kicks didn’t come off but it was quite direct and Mayo allow you do that.

“You look at missing a penalty, conceding a poor goal, hitting the post, missing one or two frees –that game was there for winning – and a few awful decisions that put us on the back foot as well. You know, referees are under serious pressure but agendas being driven by the top, it probably puts pressure on them to make those decisions.”

He was equally dismissive when asked would he be continuing as manager after five years of some achievement but also five championships that have concluded underwhelmingly.

“Look, I’m not going to get into that. I want to make sure that this group go out with their heads held high and not listen to crap outside.”