Mickey Harte: ‘I don’t think any of the three he got were anything close to a black card’ 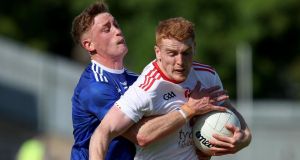 “I don’t think we will need any top class lawyers to put a case together to appeal his cards,” Mickey Harte said scathingly, standing in the sunshine on St Tiernach’s Park minutes after his Tyrone side had scythed through Cavan to secure their place in the Super 8s.

The Ballygawley man had his nephew on his mind. Peter Harte’s 72nd-minute black card, acquired when the match had long ceased to be anything more than a Red Hand exhibition in warm July sunshine, was the only stain on their outing. But it’s significant because it’s difficult to overestimate the importance of Harte as play-maker and scorer. This week, Tyrone will be busy on both the football and administrative fronts as Harte began a passionate case for the defence against the black cards his player received against Donegal and Longford and here in Clones.

“We will be appealing all three because I don’t think any of the three he got were anything close to a black card. That is how ridiculous this whole thing is. It’s so ridiculous that you can’t appeal one until you get three. Why do you think that happened? Because so many are appealable. And let me ask the question: what was this brought in for?

“For cynical play if they decided to pull someone down when they are going for a score to decide the result of the game. What would Petey Harte need to commit a black card there for? Would anybody in their right mind tell me why he would even think of it? It is a tackle. Did you see any worse tackles out there on the field today? Did you see any worse tackles with no cards? Of course. And [referee] Barry Cassidy had a good game – I told him that afterwards but I asked him where he got that card from. It is so frustrating.”

Harte was agitated about the moment but had to have been pleased about the day. There is something of the streaking comet about Tyrone now. The doubts that surfaced after their unhappy Saturday night Ulster championship exit against Donegal seem less pressing now after they have blown Kildare and Cavan away with two powerful and hugely confident counter-attacking performances. Their road show continues next weekend in Roscommon.

Cavan have a realistic sense of where they are at as they bow out: a nose ahead of an improving Armagh team but still trailing the two brand leaders in the province by some distance in terms of guile and strength. They’d be justified in casting a jealous eye at the pathway some other counties enjoyed to the Super 8s: their games have been relentlessly tough. But this was a bruising close to their campaign.

This sort of stuff is mother’s milk to Tyrone: they have a gift for slipping into yogic serenity in between the pushing and the shoving

The contest was done and dusted after a first half in which Tyrone were simply dazzling in the sun. The encounter started out as part chess match, part Saturday-night shaping outside any one of a thousand chip shops. Cavan were determined to illustrate just how much they weren’t scared of Tyrone, and so the first 15 minutes were broken up by a series of sporadic rows and tussles which caused Cassidy to police the field like a stressed-out teacher.

Of course, this sort of stuff is mother’s milk to Tyrone: they have a gift for slipping into yogic serenity in between the pushing and the shoving. The problem for Cavan was that after 20 minutes, they paused for breath and found themselves in much the same place as they had been at the same stage in the Ulster final: helplessly caught in the spider’s web.

Tyrone showed patience here, going point-for-point over the opening 15 minutes while stealthily figuring where the gaps and pressure points were. Niall Morgan, orchestral conductor over the first half-hour, chipped a 45 to give his team a 0-4 to 0-2 lead and, almost immediately, you felt worried for Cavan. Tyrone allowed Raymond Galligan to restart short and to his left almost every time, but from there, moving the ball upfield became an ordeal for Cavan.

Too often, they struggled to break the line of Tyrone defenders spread across the 45 and, once inside the scoring zone, they felt obliged to opt for rushed, ambitious shots. Hugh Pat McGeary accompanied Gearoid McKiernan like an over-enthusiastic usher and allowed the big midfielder to go anywhere he liked except onto that reliable left foot of his. Cavan got no ball into Dara McVeety. It took them 30 minutes to land their first point from play.

“Well, it depends what you call progress,” shrugged Mickey Graham when assessing how far his team have travelled this summer. “You just wonder where that performance came from after some of the performances earlier on. New territory for us, but while we might have made a bit of progression forward, we have a long way to go in our development. And it is going to be hard for them lads because I don’t think they deserved that. They are better than that but unfortunately the scoreboard tells its own story.”

In the Ulster final, Graham drew a really proud response out of his team when they found themselves staring down the barrel of a heavy defeat. But the adrenaline of the occasion and they day fuelled that. Here, on the edge of elimination, it was harder to produce a rebellion.

At the other end, the Red Hand slipped into exhibition mode. To the complaint that their defensive, counter-attacking game won’t beat Dublin, there is just one pertinent point: they were playing Cavan. As predicted, Cathal McShane was the lone figure up front and, at its best, Tyrone’s counter-attacking game was sleek and flowing and fun to watch.

Running at speed; filling the channels; short, swift passing and economic, smart shot selection: this devilment comes naturally to them and it suits the cut of their jib. They put this qualifier to bed in a 10-minute blitz which featured three pretty-looking points from Darren McCurry, who was playing with the chutzpah of a few summers ago. It was 0-12 to 0-3 at half time and the line for the choc ices was lengthy.

We’ve seen this before from Tyrone: an early summer setback giving way to a frightening gate-crashing through the emergency doors

In the 46th minute, Tyrone elected to deliver a long ball for the first time. Kieran McGeary picked out Cathal McShane, who duly won it, pivoted and sent a dangerous shot whistling over Galligan’s crossbar. It was a reminder that they have more than one string to their bow. By now, the day was turning dark for Cavan, trailing by 12 points against a Tyrone team evidently hungry for more.

Mattie Donnelly had such a low-key opening 20 minutes that you had to scan the field to make sure his motor hadn’t broken down outside Trillick; but, by the hour mark, he was in with a shout for man of the match. We’ve seen this before from Tyrone: an early summer setback giving way to a frightening gate-crashing through the emergency doors. They will be fighting on the administrative and football fronts throughout this week and look to be in a mood to take on the world.