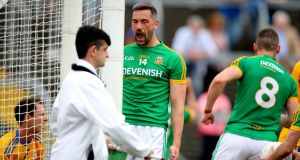 Shifting from the ridiculous performance to something approaching the more sublime, Meath still needed to summon on all their instinct and tradition to take out Clare after what felt like a sprint and an ultra marathon of a match all rolled into one.

It was super competitive, super fast, and super close right up to the end - and all suitably fitting given a place in the Super-8s was at stake. In the end Andy McEntee’s team have found themselves back in the last eight of the football championship - or these days, the Super-8s - for the first time since 2010.

The one-point defeat will be hard for Clare, their courage and persistence throughout matching Meath all the way, but ultimately the 2-16 was just enough for Meath: it was 18 points more than the 16 point defeat they suffered at the hands of All-Ireland champions Dublin in Croke Park a fortnight ago.

What ultimately held Meath through and over the line was Mickey Newman’s goal on 40 minutes: set up by the roaming Padraic Harnan, he sent the ball crashing into the Clare net, then crashing into the upright in the process, thus prematurely ending his game: nothing serious thankfully, only a bloodied bandage around his head.

It was the advantage Meath needed to just about see them through. Clare still coming in search of a later equaliser, winner even, as the clock spilled into injury time, the two last points from David Tubridy and Dermot Coughlan so near and yet so far, dying of thirst just one step short of the well.

Meath’s first goal came as the first half just spilled over into the two minutes of injury time: Donal Keogan’s close up shot stopped on the line, only for Bryan Menton to deftly boot in the rebound, and Meath suddenly were up 1-9 to 0-10.

Clare’s response was superb - Gordon Kelly popping up from corner back, Jamie Malone hitting his fourth from play, and it was all square again. Both teams were given a rapturous standing ovation coming off the field at half time, and for good reason: inseparable throughout, level on eight different occasions, it was end-to-end and sometimes backs to the wall to.

Gary Brennan was leading the Clare charge from midfield, commanding room and respect every time he ran down the middle, chipping in with a first half point, Jamie Malone hit four from play in that half, each one as impressive as the next, with David Tubridy combining 0-3 from play and frees.

Their movement in possession was relentless, corner back Gordon Kelly also came up to split the posts, with Cathal O’Connor and Cian O’Dea also scoring from play.

Meath however were giving back as good as they got, Bryan McMahon, Newman, Thomas McGovern and James Conlon all scoring from play, already doubling the number of scorers they had against Dublin a fortnight ago.

It was far from comfortable in the end, not that that matters now; the Meath journey will promptly resume next Sunday with a trip to Ballybofey to face Ulster champions Donegal (2pm) in the opening game of Group 1; Kerry will host Mayo in Killarney (4pm) in the other group match. It’s not Dublin’s group, though no less daunting.

This win also means Meath helped even the score in 2019, joining Cork as the beaten provincial finalists into the last eight, while Ulster losers Cavan and Connacht’s beaten finalists Galway were both sent out by round three winners Tyrone and Mayo respectively

So Meath join round four winners Mayo, Cork and Tyrone to play off against the provincial winners, Dublin, Kerry, Roscommon and Donegal, who all have home advantage next week.

Matsuyama makes Masters history for Japan; Irish rowers win gold and silver 07:24
Leo Cullen: ‘a good chunk of the guys who are injured will be back’ 06:15
Rachael Blackmore’s Grand National victory resonates around the world 06:00
Louis and Robinson may have died broke but their legacy is timeless 06:00
Potential of Parsons and Wall put French and English on notice 06:00
Crossword Get access to over 6,000 interactive crosswords