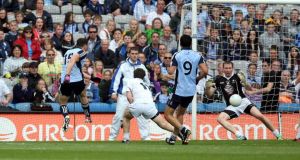 Yesterday’s GAA Leinster football semi-final at Croke Park deviated from the narratives of the past few years but not in the way Kildare might have hoped. There was no agonising one-point defeat for Kieran McGeeney’s men; instead they trooped off the field thankful that a 16-point thrashing hadn’t been considerably worse.

Dublin were impressive, calmly riding the speed bump of an opening eight minutes that saw them trailing by 1-2 to nil, confiscating the initiative from Kildare and crushing them like aluminium cans in the hour that remained.

Their effort was sustained in all areas of the pitch. In goal, Stephen Cluxton had a commanding game, backing up his defence like a sweeper, disposing of the ball with his customary efficiency, faultlessly kicking 45s and showing immense assurance under high ball to the extent of plucking down a couple of shots that looked like heading for points.

Rory O’Carroll was undaunted at full back whereas Jonny Cooper recovered from a difficult opening when he slipped on the rain-slicked pitch and allowed Paddy Brophy get in for a really well-taken goal.

Brophy kicked a point within a minute for the five-point lead that must have lifted the hearts of all Kildare supporters, mindful that the two most recent defeats by Dublin had been founded on conceding big early leads.

The ominously quick nature of the champions’ response – Diarmuid Connolly setting up Paul Mannion for a clinical finish – compounded earlier apprehensions when James McCarthy had made the first of Dublin’s several coruscating runs from the wing back positions only to see his shot come off the post.

Goal chances
It was the first of 11 clear goal chances that came Dublin’s way and they would avail of four of them. After Kildare’s early flourish, they lost the remainder of the match by 4-16 to 0-7.

The veteran John Doyle restored Kildare’s lead in the 13th minute to push them 1-3 to 1-2 ahead but almost immediately Michael Darragh Macauley broke though to create a goal opening for himself and the danger from Dublin’s deep runners was becoming increasingly apparent.

It ended in a 45, which Cluxton dispatched to equalise. Shortly afterwards Cian O’Sullivan, who was a forcefield of energy in the first half particularly at centrefield, making forward runs and covering back with the efficiency of the defender he was until this year, and Mannion set up Ciarán Kilkenny for a score that put Dublin into a lead they never relinquished.

Kilkenny had an outstanding match, linking tirelessly in attack and dropping back when required as well as shooting four points and in general playing with the composure that makes it one of the team’s great deliverances that he had second thoughts about an AFL career last Christmas.

There was danger everywhere for Kildare. McCarthy and Jack McCaffrey used their extraordinary pace to burn holes in Kildare’s statuesquely orthodox defence but they also defended well with McCaffrey getting back in the 26th minute to catch Paul Cribbin, Kildare’s best player, who had completed a good turnover in his own defence and driven forward only to be dispossessed when McCaffrey tracked him down like a greyhound coursing a hare.

Bit too clever
At times the movement could be a bit too clever and some beach volleyball exchanges at the back ended in a point for Eoghan O’Flaherty at the end of the half. But overall the defence was alert and well orchestrated by Ger Brennan at its fulcrum.

Bernard Brogan had been well contained by Peter Kelly but in injury-time before the break, was set up by Connolly’s pass after Dublin had switched the play well and rammed home the second goal to kill off any lingering defiance in the Kildare dressingroom.

The second half was a procession. Cribbin got a point back but Kildare wouldn’t score again until his second 17 minutes later by which stage Dublin had added 1-5. The goal illustrated the impact off the bench Jim Jim Gavin has at his disposal.

Connolly turned finisher
Kevin McManamon, who must cause shudders to under-pressure defences every time he warms up, motored past Eamonn Callaghan and passed to Connolly who having provided the first two goals, turned finisher. The tireless Paul Flynn was nearly in for another five minutes later and Macauley nearly demolished the Hill goal when cracking a shot off the angle between crossbar and post in the 65th minute. Another impressive replacement Eoghan O’Gara, who had come on after the interval, finally bagged the fourth goal in injury time for a very respectable 1-2 for his half’s activity – redemption for the player who had been sent off when the counties last met in the championship two years ago.

Argentina rugby great Hugo Porta continues to give back to his beloved game 07:00
George Kruis leaves the door open as he prepares to depart Saracens 06:35
TV View: Not every day a Tesco delivery disrupts a Bundesliga broadcast 06:30
Ken Early: Liverpool fans, Bamber Gascoigne and a close shave in Istanbul 06:00
As news gets better, can the pull of The Field be resisted? 06:00
Crossword Get access to over 6,000 interactive crosswords