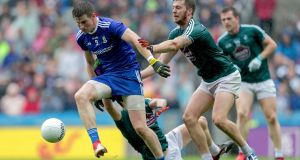 The underwhelming reaction to the weekend’s first round of All-Ireland football quarter-finals has given way to an air of anticipation about round two’s fixtures, which for the first time move out to home venues around the country.

Already Saturday’s meeting of All-Ireland champions Dublin and Tyrone in Omagh is sold out as has the following day’s match between Galway and Kildare in Newbridge.

Monaghan are expecting about 15,000 in Clones, where the capacity of St Tiernach’s Park is 29,000, for the visit of Kerry, who find themselves in the alarming position of knowing that a defeat will put them out of the championship, a perilous situation that might persuade a few more supporters to travel.

“Our support would be around 10,000,” according to Monaghan PRO Noel Duffy, “and when you bear in mind that there are only 60,000 in the county, that means a sixth of the population are supporting us. Neutrals will be a big factor in the crowd if a large number turn up”.

“People have been pointing out that we’ve beaten Kerry in three of the last four league matches but the one that we lost was actually in Clones. We won the ones in Inniskeen last February and before that Tralee and Killarney.”

Monaghan’s defeat of Kildare gives them a decent shot at qualification and if they win on Sunday they will reach the All-Ireland semi-finals for the first time in 30 years, when they lost to Cork.

The biggest shock of the opening round of matches saw Galway defeat Kerry in the championship for the first time in 53 years. Although manager Kevin Walsh played down the achievement’s historical resonance, it confirmed the county’s progress this year from also-rans to contenders.

Those who bemoan Galway’s more structured and defensively aware game plan should be aware that the great, three-in-a-row team of the 1960s was also hard to break down and the last win over Kerry, prior to the weekend, saw the Connacht champions record back-to-back All-Irelands on a score-line of 0-12 to 0-9.

By further coincidence, both teams also finished that match with fewer than 15 on the pitch. Kerry’s Killian Young and Galway’s Eoghan Kerin were sent off on Sunday whereas in 1965 Galway’s John Donnellan and Kerry brothers Derry and Jimmy O’Shea were ordered off by Mayo referee, Dr Mick Loftus, who would later become president of the GAA.

Victory in Newbridge would qualify Galway for a first football semi-final since 2001 when they went on to win the All-Ireland. That same year the county’s hurlers lost their All-Ireland final against Tipperary – the last time a county came so close to achieving the double.

The GAA’s head of games administration Feargal McGill acknowledged on Monday that the crowds had been disappointing at the Croke Park round of the quarter-final round robin.

“Attendances weren’t as big as we’d hoped although there was a myriad of reasons for that and we’ll have to reflect on those in three weeks’ time when it’s over but it’s way too early to be making any judgments. It was just one weekend,” he said.

The aggregate at Saturday’s fixtures (Dublin-Donegal and Tyrone-Roscommon) and Sunday’s was 84,241, which compares poorly with the numbers attending last year’s four knock-out quarter-finals, 140,738, although the remaining rounds to be played this year will presumably exceed that total.

McGill also defended criticisms that the championship schedules were too tight after a weekend that saw the hurling quarter-finals also played.

“Yes, absolutely it was a crowded schedule but that was deliberate because the genesis of all this was to create more time in the schedules for the club game. If you want to view this in isolation, yes it’s a crowded schedule but the only way we can create more time for the club game is to have a really tight timetable for the inter-county championships. It’s a difficult thing to do.

“We’ll reflect on the entirety of the championship. We get and accept that there isn’t huge room for manoeuvre in the schedules but that is for a reason. I don’t think we have the luxury of throwing additional weeks around because the footprint of the championship is what it is and we have to operate inside it.”