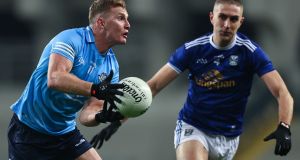 Ciarán Kilkenny in action against Cavan’s Killian Clarke. Playing in the inside line, his spatial awareness and movement is second to none. Photograph: Tommy Dickson/Inpho

Ciarán Kilkenny’s run of scoreless championship matches against Mayo is unlikely to stretch to five as he goes into Saturday’s All-Ireland final in the form of his life.

The three-time All Star is featuring in a more advanced role in championship 2020, and has scored 1-17 from play so far in four matches. That’s an average of 0-5 per match, and only Cillian O’Connor following his splurge of 4-3 against Tipperary, has scored more from play.

Kilkenny scored 1-13 in Dublin’s eight matches en route to last year’s All-Ireland triumph, being held scoreless in a quarter of them and averaging 0-2.

The Castleknock native made a name for himself, first as a minor and then as an U-21 All-Ireland winner, playing in the inside line. A complete attacker, he has gone on to become a Dublin great, if not in the role most foresaw until the past few weeks.

In 2012 Kilkenny was playing at corner forward on the Dublin U-21 team that beat Roscommon in the All-Ireland final, scoring 0-4 in that match and subsequently picking up the U-21 player of the year award. He broke into the Dublin senior team later that year, making his first start in the All-Ireland semi-final defeat to Mayo. Remarkably that’s the only championship match he has lost with Dublin and he was operating in the full forward line that day, scoring 0-3.

However, with his arrival coinciding with the final years of Alan Brogan’s time in blue, Kilkenny was thereafter deployed as a ball-carrying half forward. More often the link man than the go-to attacker, he has two All Stars at centre forward and one at left half forward.

Even from the half forward line the 27-year-old has still been a consistent score-getter, just not to the same extent as in 2020 and not in recent games against Mayo.

In last year’s semi-final win he had 47 possessions but didn’t manage a score. He also failed to score in the 2017 All-Ireland final against Mayo and likewise in the 2016 drawn final and the replay too. In last year’s All-Ireland final replay against Kerry he scored 0-4 within 40 possessions, picking up the man of the match award as a result. It was him at his best in that conductor role.

Of those 40 possessions though, only 13 were inside the opposition 45m line. So 33 per cent, the rest were out the field. In this year’s championship he’s averaging 23 possessions per match, and 77 per cent of those have been inside the opposition’s 45. In four matches he’s only had a combined 21 possessions outside of that traditional forwards’ zone, whilst in the final match of 2019 he had 27.

Will James Horan turn to the same players who quietened Kilkenny in previous contests, or make different plans given his new role?

The only award Kilkenny’s mantelpiece is missing is the Footballer of the Year gong and on current form he is just one more big scoring performance and a win away from collecting it.

Now redeployed in the inside line, Kilkenny’s spatial awareness and movement is second to none. He is a strong and honest option for a direct pass, he takes the ball on the loop at full pace and kicks over his shoulder without slowing. He has scored 18 of his 22 shots (82 per cent accuracy).

Push up on him at your peril though, Kilkenny creates his own space by back pedalling to the wing or sprinting out the field and doubling back in on himself. Here he is at his most lethal, available for a kick or handpass in behind the defence. He has scored 1-3 and kicked a wide inside the 13m line and another 0-6 between there and the 21m line.

Kilkenny is an accurate kicker off both feet but also a fantastic hand passer of the ball. A skill often overlooked by fans. He has handpassed 58 (62 per cent) of his possessions in this championship. But his timing and weight of pass, his peripheral vision and his ability to take on or draw a man in before releasing a team-mate helped Dublin to control matches throughout their five-in-a-row run.

Now, with him closer to goal, he’s assisted 0-12 in four matches, nine of which with his hands. And perhaps it’s made Dublin that bit more direct out the field too. The DCU St Patrick’s graduate has also given eight kickpasses and lost possession just four times (from 93).

Cillian O’Connor is the top scorer from play so far in the championship with 5-10, Kilkenny is second, with the next best being Tipperary’s Conor Sweeney who amassed 2-10. Jordan Morris of Meath scored 2-6 in three matches, one less than the aforementioned. Making up the top five is Mayo’s emerging star Tommy Conroy who has 1-8, while Dublin’s own newbie Sean Bugler has scored 2-4.

Conor Madden of Cavan has 1-6 from three matches (just one start), as does Donegal’s Michael Langan, while Dublin’s Dean Rock has the same after playing one game more. Down’s Jerome Johnston and Kildare full forward Darragh Kirwan both scored 0-8 in two matches, while Limerick’s Cillian Fahy scored 2-2 in the same amount of games.

No player comes close to Kilkenny on the points front however, and Mayo will be desperate to neutralise his threat this weekend. Will James Horan turn to the same players who quietened Kilkenny in previous contests, or make different plans given his new role?

Dublin’s best inside forward should really be marked by Mayo’s best inside defender – Chris Barrett – and the talents of Patrick Durcan and Lee Keegan could be put to much better use out the field where a tracker is needed to follow the likes of Con O’Callaghan (now in the half forward line) and Brian Fenton in order to limit their involvements and force them into the areas of the field where they can’t make as much of an impact. Durcan and Keegan have both done that in the past against a roving Kilkenny.

Both natural half backs – two of the best wing backs of their generation in fact – they are excellent trackers who turn the tables on forwards with constant attacking. But, as Keegan discovered while marking O’Callaghan in the full back line last year, it’s harder to put your forward on the back foot from the last line. The more traditional forms of defending are needed back there, ie getting out in front, or a hand in on the ball.

Ultimately Mayo’s defensive system is reliant on them nailing their match-ups, but Kilkenny’s change of position means a box that was previously ticked now poses an entirely new question. Five in a row of keeping Ciarán Kilkenny scoreless would go a long way but will take some doing with him this close to goal.