GAA Statistics: Mayo had to pay a scoring price for their four man-markers

Mayo stymied the Dublin forwards - but how? And will they be able to do it again? 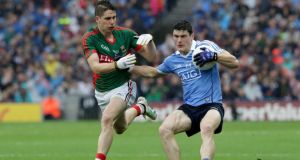 Excuses aside, Mayo held a Dublin forward line which had averaged 1-11 from play in reaching Sunday’s All-Ireland final to just 0-4. Yes, provisions made, of course, for the conditions, but how did this happen?

Wet, slippery ball and pitch. A rare bad day at the office for Bernard Brogan and Co?

Perhaps, but this Mayo defensive performance coincided with their form in getting to the final. In six games Mayo’s average concession per game has been 0-15. On Sunday Dublin scored an according 2-9.

In an error-ridden 78 minutes of football, most Dublin and Mayo players will look back on at least one mistake, one score conceded or chance missed that would have been the difference in winning and drawing.

Lee Keegan has now been assigned a man-marking role on Diarmuid Connolly in two All-Ireland finals and two semi-finals spanning four seasons. He has actually outscored Connolly from play, 0-4 to 0-3 in those games. That would have been double scores if it were not for a misplaced kickout by David Clarke in the second half of Sunday’s drawn final. Contrast that with the 0-6 Connolly has slotted from play in his last three Championship matches against Kerry.

That was just one of the many unnecessary points conceded, but for Keegan it was just the second point he has conceded from play in this summer’s championship. Marking London captain Mark Gottsche, Galway’s Shane Walsh (0-1), Fermanagh’s Ryan Jones, Kildare’s Fergal Conway, Westmeath’s Paul Sharry, Tyrone talisman Seán Cavanagh and Tipperary sharpshooter Michael Quinlivan – Keegan’s role as man-marker had before Sunday yielded a concession of just 0-1 and a personal scoring tally of 0-6 (from play).

Since the 2012 season Mayo have conceded 15 goals in the seven games they have lost from the quarter-final stage onwards. While in the eight games they have won they have conceded just five. Goals have been their undoing, of that there’s no doubt, and the same was almost the case once more on Sunday. Albeit in unfortunate circumstances.

Nevertheless Mayo have vastly improved in this area under Stephen Rochford, and this is due largely to his deployment of man-markers – based on the match-up rather than the position – and the introduction of a consistent sweeper in Kevin McLoughlin.

Last summer Mayo conceded nine goals in five championship games. Before Sunday’s final, and the two own goals that kept Dublin in the game during the first half, Mayo had conceded just three in seven games. 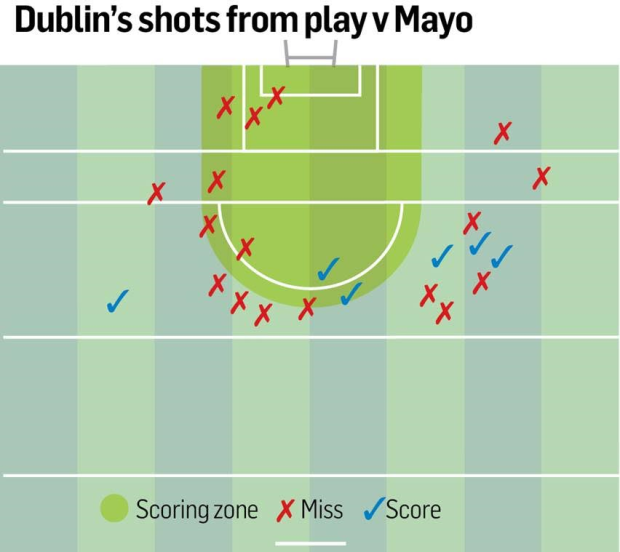 And so Rochford set up his backline on Sunday with four man-markers, with Colm Boyle (before the introduction of Paddy Andrews) and Donal Vaughan (midfield for much of the second period) given looser roles. McLoughlin filtered back from wing forward. The middle third then was subject to a zonal press.

Ahead of Sunday, Dublin forwards Bernard Brogan, Dean Rock, Diarmuid Connolly and Kevin McManamon had accounted for 67 per cent of Dublin’s in-play scoring total this summer – and so they were all assigned man-markers. The other two forwards, Paul Flynn and Ciarán Kilkenny, who, operating in deeper lying roles for Jim Gavin’s team, have contributed just 0-8 in this summer’s six games.

With Brendan Harrison on Brogan, Keegan resuming pleasantries with Connolly, Keith Higgins on Rock, and Paddy Durcan on McManamon, Dublin’s scoring forwards managed just 0-2 from play between them. That garnered from just nine shots.

In fact the four of them combined had just 19 involvements in an attacking position within the Mayo 45 over the 70 minutes. A job well done by the Mayo defence.

All the same, despite that marking masterclass, Mayo could still not outscore this Dublin attack and win the game.

This had a lot to do with the offensive sacrifice made by deploying four man-markers.

As a running team much of Mayo’s attacking threat comes from the likes of Keegan, Higgins and Colm Boyle, who was tasked with marking McManamon once Andrews entered the fray and was marshalled by Durcan.

Before Sunday’s game, defenders had scored 25 per cent of Mayo’s in-play total, and that contribution was lacking in the final.

Mayo’s attack after attack last weekend ended in the middle third with a turnover or error being forced – with the lack of the usual overlapping run coming from behind.

Mayo’s four man-markers only entered attacking positions on 13 occasions over the the game, with Durcan’s point and earlier goal chance the only efforts on the target.

Much of this was the result of an over emphasis on 'where is my man'. But also their touch-tight marking meant they were unable to break free from the Dublin forwards as easy themselves upon a turnover.

One of the few flaws in the Mayo defensive plan on Sunday was the oversight of Brian Fenton’s impact. The collective zonal press in the middle third, rather than men taking responsibility for their direct opponent, was punished by Fenton’s elusive running, with a point and two goal chances accruing.

In the first instance Seámus O’Shea, and then McLoughlin in the second, were caught ball-watching, screening, as Fenton ghosted in.

For the first goal Keegan and Higgins were entirely occupied by their own man, neither of which were making as threatening a run inside. Durcan did the same with McManamon for Fenton’s second goal chance.

So, for Mayo the overall challenge is to strike that balance between maintaining their impressive defensive standards while taking more of a chance to push on and win the game. Not waiting to be left in arrears and with no other choice but to up the ante.

Dublin, meanwhile, need to find a way to break their key forwards free from the shackles of their man-markers, while those further afield must join Fenton in punishing the breathing space allotted.