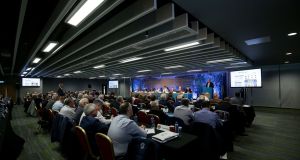 For much of Saturday’s special congress debate which decided to approve the introduction of a Tier 2 football championship, delegates in Cork’s Páirc Uí Chaoimh had the weary and wary demeanour of fairground goers who had lost too much money to the three-card trick man.

Both sides acknowledged that these graded championships in the past had fizzled out amidst a lack of interest from competing counties and public alike.

Antrim chair Ciarán McCavana (opposing), the most colourful of the contributors, referred to hurling’s equivalent championship, saying that RTÉ gave “more coverage to Marty Morrissey’s clothes than to the McDonagh Cup”.

There was also the dichotomy between a competition that less successful counties could aspire to winning and one whose secondary status would fail to inspire young footballers and deter sponsors from getting involved.

Leitrim chair Terence Boyle pointed out that the county’s last Connacht title, the 25th anniversary of which was recently celebrated, “came on the back of winning the B All-Ireland” and suggested that two tiers mightn’t even be enough to cover the spread of standards in the game.

GAA president John Horan said afterwards that the inspiration for the idea had come from Leitrim and Wicklow, whose delegate Martin Coleman also spoke during the debate, saying that his county’s Gaelic Players Association representative had declared their players were in favour.

The GPA’s Central Council delegate Séamus Hickey however said the organisation nationally was opposed as, although supportive of the concept, they weren’t happy with the proposed format, which was felt to offer too few fixtures.

The motion was also advocated by Sligo, Westmeath, former presidents Seán Kelly (originator of the most recent tiered championship the Tommy Murphy Cup, which ran until 2008) and Nickey Brennan, Louth and Limerick and also opposed by Down, Carlow, Tyrone and Fermanagh.

Asked later how the association would learn from the shortcomings of previous graded championships, director general Tom Ryan echoed the concern about profile.

“People want to make sure we promote the competition. I don’t actually remember what we said or the GAA said they were going to do to market the competition the first time. So I can’t be specific in terms of what we did or didn’t do. Probably what I remember is that it was a competition that started out quite well and petered out a bit. So we need to make sure that when this starts we hit the ground running.”

Former president Nickey Brennan had suggested holding the final on the same day as the All-Ireland and instead of the minor final. Horan was open to the idea but emphasised as he had during the debate that it formed no part of the current proposals.

Ryan outlined that it was also under consideration to hand over the new championship to county sponsors rather than seek a new backer.

Hosting county chair Tracey Kennedy of Cork was busy at the weekend between organising the special congress and watching carefully as the Tier 2 debate unfolded, as Cork – relegated to Division Three for next year – are one of the counties in line for inclusion.

They will have a double opportunity to trade up with either a swift promotion back to Division Two or a win over Kerry in the Munster semi-final next summer.

“Yes,” she said after Saturday’s congress, “there’s no doubt it’s a more welcome scenario for Cork if we’re honest about it in that it gives us those two chances. Now, I’m not saying for a minute that we wouldn’t beat Kerry in the championship but it does give us an extra chance.”

Before the Tier 2 debate Kennedy had also raised the issue of the GAA’s Fixtures Calendar Review task force and whether the proposed new competition was cutting across it, just as it was finalising its report.

Horan made the point that they would be debating a competition to commence next year in 2020 whereas the task force recommendations wouldn’t apply until 2021.

On the subject of the playing rules changes (see panel), agreed in summary fashion after the Tier 2 proposal had been accepted, the president admitted he had expected there to be more discussion, particularly on the advance mark, allowing players a free kick if they catch a kicked pass of at least 20-metres distance within the opposition 45.

“I thought the debate on that would have been far more comprehensive, probably a little more divisive than it actually was. You saw the level of debate. We are where we are. That’s the democracy we have, that’s what we produce. So we have to move on.”

Another decision, more low-key, taken at the weekend by Central Council was to relocate the under-20 football championship to the spring after an initial two years being played during the summer months with no crossover allowed between the panels and their county seniors.

This was to emphasise the developmental nature of the age grade but asked would this continue to be the case, Tom Ryan was non-committal: “That has to be determined.”

The president was asked whether under-20 players would continue to be kept separate and referenced the previous rules that once a county was out of the under-age championship they would be eligible. “I can’t see a reason they’ll be stopped.”

Ryan also commented on the public differences between Galway and Mayo and their respective sponsors and benefactors when asked was he concerned that they would create a precedent.

“No, I don’t think so because that has been unprecedented up to now and I think counties . . . have a very good relationship with their sponsors and it’s a very, very important stream of income . . .

“Counties can’t operate without sponsors and at the same time, the whole area of sponsorship has gone from 10/15 years ago when they were almost kind of donations whereas now you have to treat your sponsor well and counties do that and counties are good at that.”

1. To introduce in 2020 a Tier 2 football championship, contested between counties from Division Three and Four of the league once they have been eliminated from the provincial championship. Exceptions will be any counties that reach their provincial finals and from next year, the holders of the Tier 2 championship.

3. Providing an attacking mark, allowing a free kick for a player who catches a kicked pass that travels at least 20 metres within the opposition 45.

4. Changes the black card punishment from immediate replacement for the offending player to a 10-minute sin bin with no substitution.

1 The Offload: Ireland are stuck in no man’s land
2 Nicky English: Galway and Waterford face battles with fatigue in All-Ireland semis
3 Every kind of wind imaginable was against Tipperary football - and they came through
4 Ken Early: Roles have reversed for Guardiola and Mourinho
5 Former Ireland assistant manager Maurice Setters has died aged 83
Real news has value SUBSCRIBE